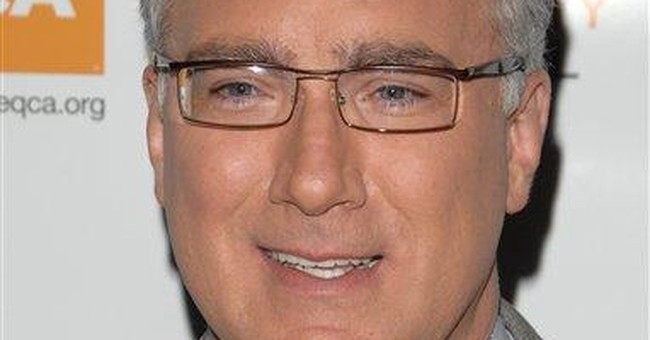 "This will be the last edition of your show," MSNBC's Keith Olbermann, on the air, claimed he was told by management. What to make of Olbermann's abrupt departure, an apparent firing?

Did post-Tucson concern over "vitriolic rhetoric" cause Comcast, MSNBC's new owner, to recoil at Olbermann's greatest hits? They include, but are by no means limited to:

Calling opposition to ObamaCare the equivalent of "terrorists ... killing 45,000 people every year"; blaming Rush Limbaugh for the Oklahoma City bombing; calling the tea party-backed Republicans racists who would bring back "Jim Crow ... bread lines ... robber barons" and "hanging union organizers"; calling now-Sen. Scott Brown, R-Mass., a "homophobic, racist, reactionary ... teabagging supporter of violence against women"; accusing columnist and Fox News contributor Michelle Malkin of engaging in "morally bankrupt, knee-jerk, fascistic hatred without which (she) would just be a big mashed-up bag of meat with lipstick on it"; accusing President George W. Bush of "urinating on the Constitution" and of committing "panoramic and murderous deceit"; exclaiming about Bush, "You're a fascist!"; asserting that Bush "lied us into a war and, in so doing, needlessly killed 3,584"; calling Fox News' Chris Wallace "a monkey posing as a newscaster"; and saying of the then-Whitewater prosecutor, "It finally dawned on me that the person Ken Starr has reminded me of facially all this time was Heinrich Himmler ... a persecutor as opposed to a prosecutor."

Maybe it's as simple as this. Lawrence O'Donnell, who held down MSNBC's 10 p.m. slot and who frequently and ably guest-hosted for Olbermann, now takes over. O'Donnell once repeatedly screamed "liar!" at Swift boat veteran John O'Neill and had a shouting match with a former Bush speechwriter over O'Donnell's accusation that Bush condoned "torture." O'Donnell is a self-described "socialist" who wants to "ban all guns in America" and "make Medicare available to all."

Olbermann reportedly made $7 mil a year. It's a safe bet that O'Donnell earns a fraction of $7 mil and that the new management foresees no appreciable drop in ratings. Addition by subtraction -- with no change in content or volatility.

Olbermann's show, for years, kind of bumped along at the bottom of the aquarium, with ratings below CNN's fare and well below that of Fox News. Then came "Olbermann's Moment," a seven-minute verbal beat-down of then-Defense Secretary Donald Rumsfeld. Overnight the ratings shot up. Olbermann soon climbed over CNN and settled in at the rear of Fox News opinionators. Not bad -- for MSNBC.

Olbermann's rants encouraged an MSNBC cohort, "Hardball's" Chris Matthews, to dial it up even more. Eureka! The network found its mojo: "We shall be the anti-Fox Fox!" This begat Rachel Maddow, a double-leftist from Air America radio. And MSNBC added Ed Schultz, a double-leftist radio host from North Dakota.

Olbermann thus pushed MSNBC's management into a new business plan. Pre-Olbermann, it was a network in search of an identity -- and ratings. More than anyone, he led the cabler out of the wilderness and into the bottom of the middle tier. After all, MSNBC once gave shows to the decidedly non-liberal Laura Ingraham, Alan Keyes and ... Michael Savage!

When Olbermann signed off for the last time, he thanked "the late Tim Russert," who, he claimed, had his back. This is dubious. It's far more likely that Russert, who took pride in his role as a nonpartisan, tough-on-both-sides newsman, deeply resented the post-Rumsfeld Olbermann makeover.

Would Russert have cheered MSNBC's bizarre election-night 2010 coverage, manned by Matthews, Maddow and Olbermann -- all going full-throttle Howard Beale? Russert's son, Luke, works at NBC News. Somebody should ask him.

At my dentist's office a few weeks ago, a woman in the waiting room said: "I never agree with you. My husband told me to stop listening. But of the guys who think like you, you're the only one I can stand." She named the usual names, and ripped them. "They're so hateful!"

"Don't you feel there's a lot of what you call 'hate' on the left?"

"How do you feel about Bill Maher?"

Now, post-MSNBC, the double-left will adore Olbermann more than ever. He becomes the "man who spoke truth to power and suffered its wrath." With this rabid, decent-sized following, and after his non-compete is up, Olbermann can quickly resurface.

Maybe he'll get an HBO Maher-type show -- where he even gets to cuss.