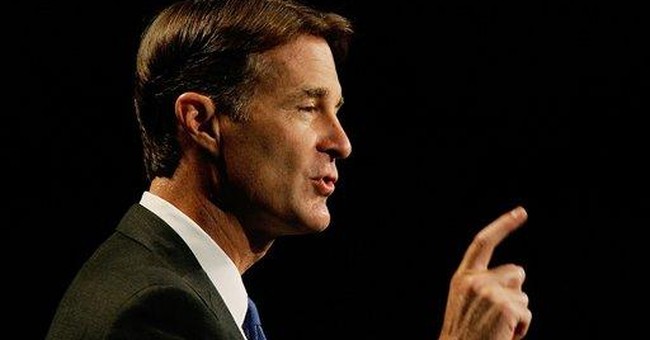 Sen. Evan Bayh, D-Ind., "shocked" President Barack Obama and his party by announcing his plan to retire from the Senate. Appearing on CBS' "The Early Show," Bayh explained: Washington suffers from acute partisanship. Washington doesn't work. It is broken.

How noble -- a principled position against "divisiveness." Let us honor a good man standing tall against the lack of "bipartisanship." Pass the barf bag.

When has Washington, D.C., not been "divisive" under a president pushing unpopular ideas -- whether the war in Iraq, the Senate "amnesty" bill, partial privatization of Social Security or Bill Clinton's attempt to allow gays to serve openly in the military?

Could it be that the "fed-up" senator feared losing re-election? Don't ask. CBS didn't. The possibility that Bayh faced a tough re-election wasn't even hinted at. But imagine Bayh, who explored a 2008 presidential bid, running for re-election while justifying to skeptical Hoosiers his votes for "stimulus," TARP, the auto bailouts and ObamaCare.

In a hypothetical race against undeclared candidate Rep. Mike Pence, R-Ind. -- according to a recent Rasmussen poll of likely voters -- Bayh was down 3 points. Against another possible opponent, former House Republican John Hostettler, he was only ahead by 3 points. Welcome to the new normal. No Democrat or squishy Republican is safe.

By a 2-1 margin, more people call themselves politically conservative than liberal. Self-identified "independents," who outnumber both the Dems and the Republicans, have turned against Obama with a vengeance. This center-right country now realizes it elected a left-winger for president. And voters don't like what they see or what he's doing.

Even Bayh, perhaps inadvertently, let on that he believes the "stimulus" failed to stimulate. "If I could create one job in the private sector by helping to grow a business," he said, "that would be one more than Congress has created in the last six months."

Politicians face voters upset with spending, borrowing and an ever-increasing federal government. The Constitution's framers wanted "gridlock," with laws deliberated at length before vote and implementation. Government was never designed for "change" or to "solve problems" -- if this means bigger government. Our government was designed to be limited.

Florida's Republican governor/Senate candidate, Charlie Crist, who hugged Obama and supported the bailouts and the "stimulus," is down in the polls against a more conservative Republican. Even Sen. John McCain, 2008's GOP presidential candidate, faces vigorous opposition in his primary against a self-described "consistent" conservative.

In Bayh's case, how embarrassing would it be to outspend your opponent ... and lose? Makes it tough for donors to kick in for a presidential run. Why take the chance?

If he bows out now, with the traditional media helpfully painting him as a lock for re-election, Bayh can go around the country unshackled. He can make news on his terms -- staying visible without having to show up somewhere, vote and create a record that requires defending. To keep up his profile and broaden his base, he could shoot for a gig on Fox. Fox News chief Roger Ailes has probably already sat him down for schnapps.

If Obama's popularity continues to erode, Bayh won't be quite as tethered to him. If he stays in the Senate and votes with Obama -- as he has so far -- how can he criticize? He becomes "part of the problem." If he votes against Obama, he invites the wrath of his party's liberal base (a redundancy). Retired, he can criticize and distance himself from unpopular policies.

For now, things look grim. Despite some positive signs, most people feel the economy remains in the tank. Home foreclosures figure to rise, with commercial real estate not far behind. Soon the Bush tax cuts expire, resulting in tax hikes during a weak economy. The spending and borrowing will eventually spark high inflation. The debt and deficit get bigger.

If Obama loses in 2012, Bayh becomes better-positioned for a presidential bid. He can say, "I would have done this or that differently." So he pulled the rip cord. Got out on top. He can cool his heels, make some jack and get set for the 2016 campaign -- tanned, rested and ready.

Better to bow out like Rocky Marciano than Muhammad Ali.