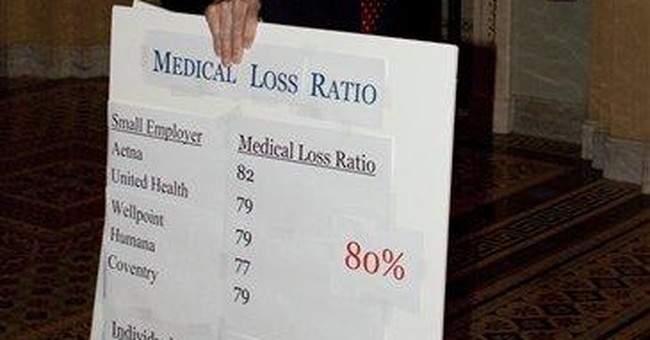 Ignore, for the moment, the ludicrous claim that giving 30 million Americans health insurance actually lowers the cost of health care. What happened to freedom, to the opposition to an intrusive federal government?

Ask a liberal what he most dislikes about the "right"? "I resent the attempt to tell me how to live my life," he'll say. He'll mention abortion and say that the decision belongs to a woman and her doctor. He'll mention same-sex marriage and say that government should not prevent two people of the same sex from marrying, especially if one objects based upon religious grounds. He'll argue that a Supreme Court "stacked" with right-wingers threatens his liberty.

Supreme Court Justice Antonin Scalia gives liberals hot flashes. He is religious. He calls the Constitution a "contract," not a "living, breathing" document on which one can discover or project nonexistent rights. He is a "strict constructionist," or an "originalist," who believes that the literal words in the Constitution have meaning. He thinks his job is to figure out what the original Framers meant, not what he would like them to have meant.

Ask a liberal how Scalia and those who share his "conservative" philosophy think the Supreme Court should decide issues like abortion, same-sex marriage and doctor-assisted suicide? He'll say, "Scalia would impose his religiously based worldview on society -- anti-same-sex marriage and anti-abortion -- because the federal government should always preserve life."

No, Scalia would not. In fact, Scalia has publicly said these issues are none of the Court's business. He's said that however he feels personally about these contentious matters, the Constitution gives the Court neither the authority nor the expertise to decide them -- and such matters are ideally left to the states.

This brings us to ObamaCare.

Recall the anger at former President George W. Bush, who, to fight the war on terror, "trashed" and "shredded" the Constitution. The same people who railed against the Patriot Act, the terror surveillance program and "illegal" torture happily unleash the power of the federal government to redistribute wealth for ObamaCare, a socially desirable objective. Never mind the absence of authority in the Constitution.

The left tells us that "health care is a right, not a privilege." Surely the Constitution says so. No, it does not. Article I, Section 8 details the limited power, duties and responsibilities of the federal government. Extracting money from your paycheck and giving it back to you when you retire -- Social Security? Not there. Taxing workers to pay for the health care of seniors -- Medicare? Not there. Mandating that employers pay workers a minimum wage? Not there.

The Court asserted that the Constitution meant what it said and said what it meant. This infuriated FDR. He threatened to expand the number of Court justices, adding jurists who saw the Constitution the way he did until he got the kind of decisions he wanted. Intimidated, the Court blinked. Actions by the federal government that the Court once had deemed illegal suddenly became permissible.

A liberal once asked me: "What should society do about the poor? Is your attitude 'just (expletive) them'?" I said: "Allow me to rephrase your question. Because of someone's plight, is he entitled to money from you?" "No," he said, "but it's the right thing to do." Yes, a moral, compassionate society cares for those who cannot care for themselves. This is, however, an entirely different matter from using the power of government to take from someone who has, to give to someone who doesn't. The Constitution does not provide that authority. Nor has it been amended to do so.

What about the poor? Through economic freedom and competition, we make goods and services cheaper, better and more accessible. Health care is less affordable because of well-intentioned rules and regulations. When government officials go beyond passing laws to protect us against force or fraud, they raise costs and hurt the poor.

Today we submit to it.