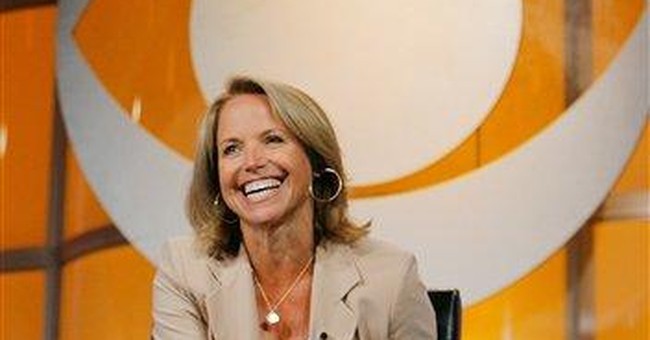 "Twas just weeks before Christmas, and what do you know? Senate Democrats are once again praying for Snowe.

"They won 60 votes to start the debate, but they're back to square one ... and they just have to wait.

"Wait for blue dogs like Nelson and Lincoln ... who say a public option would mean the economy sinkin'.

"Wait for Joe Lieberman ... who says it won't pass ... and hope Mary Landrieu can change her mind fast.

"The Republican votes right now total zero ... but a trigger could make one woman a hero.

"The moderate who hails from the land way up north ... could save Harry Reid's Christmas with a deal she brought forth ... urging government plans for when private ones fail.

"At this point no compromise looms within sight ... that means after Thanksgiving ... it's on with the fight.

"Enjoy your turkey and know we'll be here ... to help make this tough topic ... just a little more clear."

Good grief! What a relief that we have nonpartisan "journalists" like Couric to help us navigate this "tough topic."

Couric's "poem" explicitly supports "health care reform." She clearly wants the sides to come together and produce something. She never questions the presumed need for "reform," much less suggests it wrong -- indeed unconstitutional -- for the federal government to take money from taxpayer A and give it to B (who may or may not be a taxpayer or, for that matter, even a citizen) because B lacks health insurance.

President Barack Obama promises to reject any health care "reform" that "adds one dime" to the federal deficit. The Congressional Budget Office, nonpartisan and generally respected by both sides of the aisle, estimates that the health care plan now under debate in the Senate would, indeed, achieve this objective.

In the classic Mel Brooks comedy "Blazing Saddles," the hero warns an alcoholic gunslinger, played by Gene Wilder, that if he continues to drink, he will die. To this, Wilder replies, "When?" As to the alleged "budget neutrality" and the CBO's corroborating estimate, one needs only ask, "When?"

The CBO looks at the cost of ObamaCare in the first decade. What's the problem? The spending begins in 2013. But the ObamaCare "revenue" -- from taxes and supposed cuts in Medicare -- begins right away. So for four years, money comes in and builds up, with none going out. For the next six years, "revenues" continue, but then payouts begin.

By limiting the cost estimate of ObamaCare to only its first decade, we -- voila! -- achieve Obama's objective of not adding a "dime" to the deficit. The following decade and the decades beyond are when ObamaCare blasts off toward deficit-exploding costs, not even remotely "paid for."

Today the number of viewers watching nightly network news shows continues to decline, but Couric's "CBS Evening News" broadcast still attracts some 6 million daily viewers. And CBS works very closely with the influential New York Times. What appears on the front page of the Times often finds its way into the CBS newscast that evening. The two organizations even do joint polling. While the Times considers itself a nonpartisan conveyer of news, its editorial page inevitably sides with liberal, pro-Democratic Party positions on virtually every issue of significance.

President Barack Obama owes his election, in no small part, to the major media's cheerleading on his behalf. "Reporters" favor government-provided universal health care, Big Government and the corresponding belief that government exists to "redistribute" money and goods to the "deserving" -- in essence portraying Americans as insufficiently charitable to take care of the needy without government (although this was the intention of the Founding Fathers).

The mainstream media not only are "pro-choice" on abortion but also believe that it is backed by a constitutionally protected right. Notwithstanding the election of the first black president of the United States, who defeated an odds-on favorite female contender for the nomination, the major media still believe racism and sexism remain big problems. They support "racial and ethnic and gender diversity" -- and government's use of power to achieve it. They consider peace the absence of war -- especially if the war began during a Republican administration. They have a naive trust in diplomacy even as our enemies grow more aggressive, a reluctance to recognize evil, and a respect for "world opinion" above our own national security. They consider Republicans and conservatives not just wrong but sinister.

As we "journalists" like to say, that's a wrap.