The Letter Joe Wilson Should Write 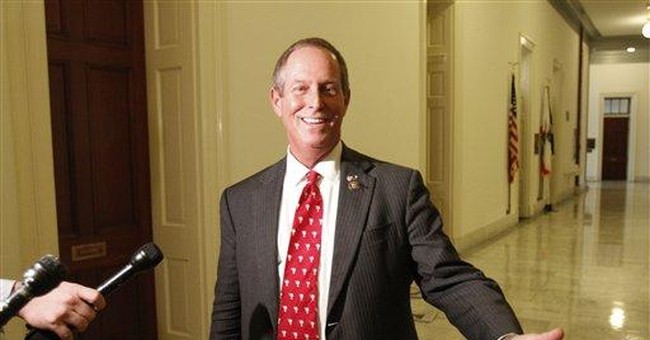 I apologized to President Obama for my "you lie" outburst during his recent speech. The President immediately accepted my apology. Yet you and nearly all members of your party in the House of Representatives demanded that I make yet another apology from the floor of the House. I refused and then received an admonishment by resolution -- passed almost completely down party lines.

Now it's your turn, Madame Speaker. I invite you and others in your party to apologize publicly to former President George W. Bush for vicious, personal and frequently race-based attacks.

"Bush is an incompetent leader," you said of the then-sitting president. "In fact, he's not a leader. He's a person who has no judgment, no experience and no knowledge of the subjects that he has to decide upon." If a Republican --especially a Southerner -- attacked Obama that way, former President Jimmy Carter would call him or her a racist. Apologize, Madame Speaker.

Sen. Ted Kennedy died never having apologized. Kennedy accused the Bush administration of lying about the intelligence leading up to the Iraq War. "Week after week after week," Kennedy said from the Senate floor, "we were told lie after lie after lie." Please check the rules for a posthumous resolution of admonition.

How about an apology from now-Secretary of State Hillary Clinton? She played the race card. Before a predominately black audience, Clinton said, "When you look at the way the House of Representatives has been run, it has been run like a plantation. And you know what I'm talking about."

Imagine attacking Obama's intelligence the way members of your party did to that of President Bush. "I sometimes feel that Alfred E. Neuman is in charge in Washington," said Clinton, referring to the dimwitted icon of Mad magazine. She even used Neuman's catchphrase, "What, me worry?" to describe how Bush handled tough issues.

What about an apology from Sen. John Kerry, D-Mass.? Like his colleague, the late senior senator from the Bay State, Kerry also accused Bush of lying. "Their plan," Kerry said on Don Imus' show in 2006, "is lie and die. And that's what they're doing. They lie to America about what's happening on the ground; they lie about why we're there; they lie about what's happening." Kerry, too, questioned Bush's intelligence. As the returns for the 2004 presidential race came in, Kerry said, "I can't believe I'm losing to this idiot." Imagine someone in my party -- based on the current standard of "civility" -- saying something like that about President Obama.

What about Democratic Sen. (and then-minority leader) Harry Reid of Nevada? He called Bush a "loser" and a "liar." Reid apologized for the "loser" comment but let stand "liar."

What about Democratic Rep. John Dingell of Michigan? On ABC's "Nightline," he compared the then-GOP-controlled House to "the Duma and the Reichstag" -- referring to the legislature set up by Czar Nicholas II of Russia and the German Weimar Republic's parliament, which brought Adolf Hitler to power. (Of course, "Bush equals Hitler" posters, swastikas and calls for assassination were commonplace at anti-Bush rallies.)

What about the use of the race card by now-chairman of the House Ways and Means Committee, Democrat Charlie Rangel of New York? He called President George W. Bush "our Bull Connor." Who was Bull Connor? He was the racist Birmingham, Ala., public safety commissioner who sicced dogs and turned fire hoses on civil rights marchers in the 1960s.

What about the use of the race card against Bush by then-candidate and now-Democratic Sen. Claire McCaskill of Missouri? About the administration's response to Hurricane Katrina, she said, "George Bush let people die on rooftops in New Orleans because they were poor and because they were black."

Neither then-presidential campaign manager Donna Brazile nor her boss, Al Gore, ever apologized for Brazile's assertion that the Republican Party possesses a "white-boy attitude." This means, she explained, "(the GOP) must exclude, denigrate and leave behind."

What about former governor/presidential candidate/Democratic National Chairman Howard Dean? He characterized the contest between Democrats and Republicans as "a struggle of good and evil. And," Dean said, "we're the good." Dean also told a National Public Radio audience, "The most interesting theory that I've heard so far -- which is nothing more than a theory, it can't be proved -- is that (Bush) was warned (about the 9/11 attacks) ahead of time by the Saudis."

And finally, what about "the tone" of President Obama's chief of staff, Rahm Emanuel? In a 2006 Chicago Tribune article, Emanuel succinctly expressed his feelings toward my party. "(Republicans)," he said, "can go f--- themselves."

I await your response.