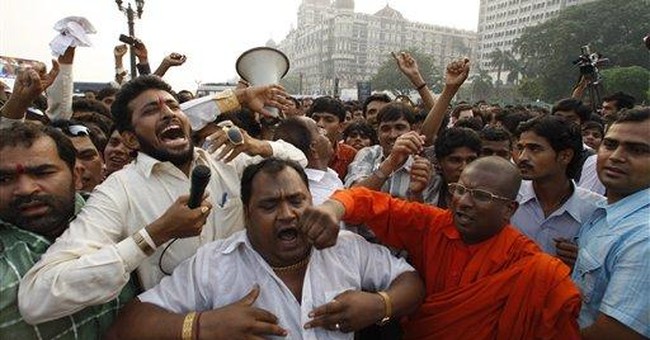 "Does it have subtitles?" I asked.

My friend Nina wanted to see a Bollywood film with the weird title of "Slumdog Millionaire." I preferred to see the new James Bond film because, really, I just wanted -- during the Thanksgiving holiday -- to put my brain on cruise control for an hour or two and watch good ol' reliable 007 blast bad guys.

"But I've heard amazing things about this film," she insisted. So off we went.

Movie reviews that reveal too much always bother me. So here's an outline -- and I mean outline, because for a brief 120 minutes, "Slumdog Millionaire" surprises, astounds, amazes, entrances and intrigues. It is, at its bottom, a love story.

A dirt-poor orphan boy, Jamal, ends up on the Indian version of "Who Wants to Be a Millionaire." How he got there, why he got there, how an uneducated young man managed to answer questions -- well, that's the journey.

This is also a story about the path taken by two brothers. It is about cruelty and exploitation and the abject, completely dehumanizing poverty in India, a destitution that even the poorest among us would find unimaginable.

And how ironic that much of the film takes place in Mumbai, India. For on the day we watched the film, Indian authorities almost 9,000 miles away fought with Islamic terrorists who launched multiple attacks, ultimately leaving more than 170 dead and hundreds more wounded.

The viewer of this film is stunned -- time and time again -- at the poverty that makes the poorest rundown shack in Appalachia look like the honeymoon suite at the Bellagio.

In America, we consider a family of four "poor" if its annual income falls below $21,203. And we actually undercount income -- ignoring assets accumulated in prior years and disregarding non-cash welfare, such as taxpayer-funded education, lunch programs, health care, food stamps and subsidies for public housing. Only 6 percent of poor households, according to The Heritage Foundation, are overcrowded -- meaning more than one person per room. More than two-thirds of "poor" Americans live in housing with more than two rooms per person. And 43 percent of America's poor households own their own homes -- and the average poor person's home has three bedrooms, one-and-a-half bathrooms, a garage and a porch or a patio.

"Overall," writes Heritage, "the typical American defined as poor by the government has a car, air conditioning, a refrigerator, a stove, a clothes washer and dryer, and a microwave. He has two color televisions, cable or satellite TV reception, a VCR or DVD player, and a stereo. He is able to obtain medical care. His home is in good repair and is not overcrowded. By his own report, his family is not hungry and he had sufficient funds in the past year to meet his family's essential needs. While this individual's life is not opulent, it is equally far from the popular images of dire poverty conveyed by the press, liberal activists, and politicians."

"Nearly three-quarters of poor U.S. households own a car," says the study, "31 percent own two or more cars. Ninety-seven percent of poor households have a color television; over half own two or more color televisions. Seventy-eight percent have a VCR or DVD player; 62 percent have cable or satellite TV reception. Eighty-nine percent own microwave ovens, more than half have a stereo, and more than a third have an automatic dishwasher."

In 1970, only 36 percent of the entire U.S. population -- rich and poor -- lived with air conditioning, while today 80 percent of poor households have air conditioning. The average poor American has more living space than the average citizen -- of all income levels -- living in many cities throughout Europe, including Paris, London, Vienna and Athens.

Right now, our economy is in a recession of unknown duration, with rising unemployment and vast economic anxiety. But we live here, in America -- a country of vast prosperity, freedom of choice, and a control over our own destinies that much of the world simply finds breathtaking. And this film reminds us that things could be worse -- much, much worse.

There are good movies. And then there are movies where everything works -- the story, the acting, the experience. These are the films where -- when they end -- the audience just sits there. Stunned. Numb. We watch while the credits roll, as the soundtrack plays. We sit, take in, reflect upon, and try to get our heads around what happened during the last two hours.

When Nina and I walked out of the theater, we started talking with another couple. "I grew up poor," the woman said, "or I thought I did. But then my brother, who had been stationed in Bosnia, came home. He said, 'I've seen real poverty, and I'll never complain again.'" And neither will anyone else who sees this film -- not for a long, long while. Yet above all, "Slumdog" is a story about what kept Jamal going, what drove him to try to survive and cope.

It is called love.