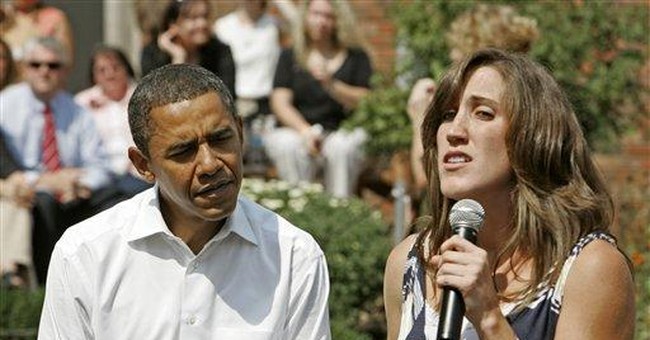 The John F. Kennedy legacy came up repeatedly during the Democratic National Convention. But today, would JFK even be a Democrat?

Kennedy supported, in today's lexicon, a George W. Bush-like "belligerent" approach to fighting the Cold War, and told CBS' Walter Cronkite it would be "a great mistake" to withdraw the American presence from Vietnam. In his 1961 inaugural speech, Kennedy said, "Let every nation know, whether it wishes us well or ill, that we shall pay any price, bear any burden, meet any hardship, support any friend, oppose any foe, in order to assure the survival and the success of liberty."

How would such a man feel about fighting today's global peril -- Islamofascism?

Barack Obama likes to point to the 1961 Kennedy-Khrushchev summit to support his desire for meetings "without preconditions" with enemies such as Iran and North Korea.

But Kennedy's secretary of State, Dean Rusk, urged against such a non-conditions-based summit. And later, Kennedy called the summit meeting the "roughest thing in my life. (Khrushchev) just beat the hell out of me. I've got a terrible problem if he thinks I'm inexperienced and have no guts." Indeed, Khrushchev thought Kennedy a weak amateur. Following the summit, Khrushchev built the Berlin Wall and placed missiles in Cuba, an action that led the world to the brink of nuclear conflict.

Kennedy believed in cutting taxes -- deeply and dramatically. Before Kennedy's tax cuts, the top marginal tax rate stood at over 90 percent, and Kennedy -- albeit after his assassination -- got it reduced to 70 percent, a much greater percentage reduction than did Bush. Kennedy, in a 1962 speech before the Economic Club of New York said, "It is a paradoxical truth that tax rates are too high today and tax revenues are too low and the soundest way to raise the revenues in the long run is to cut the rates now. The experience of a number of European countries and Japan have borne this out. This country's own experience with tax reduction in 1954 has borne this out. And the reason is that only full employment can balance the budget, and tax reduction can pave the way to that employment. The purpose of cutting taxes now is not to incur a budget deficit, but to achieve the more prosperous, expanding economy, which can bring a budget surplus."

In January 1963, Kennedy addressed Congress: "Lower rates of taxation will stimulate economic activity and so raise the levels of personal and corporate income as to yield within a few years an increased -- not a reduced -- flow of revenues to the federal government." Several days later, JFK sent another message to Congress: "Our tax system still siphons out of the private economy too large a share of personal and business purchasing power and reduces the incentive for risk, investment and effort -- thereby aborting our recoveries and stifling our national growth rate."

In a televised national address just two months before his assassination, Kennedy broke it down: "A tax cut means higher family income and higher business profits and a balanced federal budget. Every taxpayer and his family will have more money left over after taxes for a new car, a new home, new conveniences, education and investment. Every businessman can keep a higher percentage of his profits in his cash register or put it to work expanding or improving his business, and as the national income grows, the federal government will ultimately end up with more revenues."

Kennedy, unlike Obama, opposed race-based preferences. In a 1963 interview, Kennedy expected blacks to resist a call for preferential treatment: "The Negro community did not want job quotas to compensate for past discrimination. What I think they would like is to see their children well educated, so that they could hold jobs … and have themselves accepted as equal members of the community. … I don't think we can undo the past. In fact, the past is going to be with us for a good many years in uneducated men and women who lost their chance for a decent education. We have to do the best we can now. That is what we are trying to do."

Kennedy also objected to assigning positions or granting promotions based on what today's advocates call underrepresentation: "I think it is a mistake to begin to assign quotas on the basis of religion or race -- color -- nationality. … On the other hand, I do think that we ought to make an effort to give a fair chance to everyone who is qualified -- not through a quota -- but just look over our employment rolls, look over our areas where we are hiring people and at least make sure we are giving everyone a fair chance. But not hard and fast quotas. … We are too mixed, this society of ours, to begin to divide ourselves on the basis of race or color."

So when the haze disappears, what remains? A man of limited government, low taxes and strong national defense who rejected a government-led redistribution of wealth.

In other words, someone who would today fit very comfortably in the party -- the Republican Party.