The Next Time You Say, 'Bush Lied, People Died' -- Think 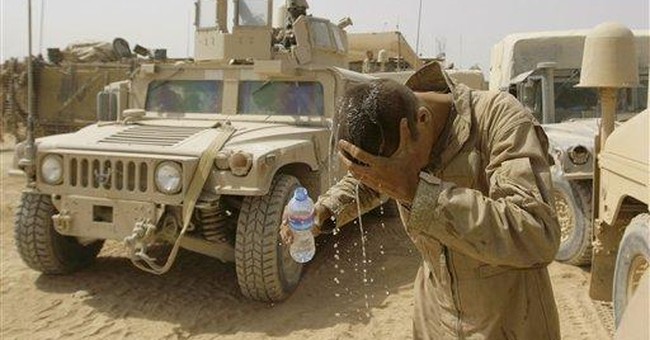 Listening to National Public Radio on the way home from work, I found the interview -- at least at first -- fun enough.

All yukked about their careers, and then the interviewer asked Adam McKay how he and Ferrell began their collaboration years ago on "Saturday Night Live." "We had several writers writing a lot of the political stuff," said McKay. "But yeah, I had written a couple pretty big ones with Will. We actually wrote a sketch right after (Bush) was elected where Dick Cheney came out and said, 'Now a message from the president of the United States,' and it was Dick Cheney. And he was telling everyone, 'If you make less than $250,000, turn the channel right now because this doesn't apply to you.' And then he would say, 'If you make less than $10 million, turn the channel. What I'm about to say doesn't apply to you,' until finally it was a billion dollars. And he literally said, 'Put all your money in defense stocks. We're going to start a lot of wars. Oh my God, we're going to make a fortune off oil.' We wrote the most absurd things for him. And Will comes in as George Bush and he's found a stray dog in the parking lot and he's asking Cheney if he can keep him. And then he leaves, and Cheney goes on to talk about how we're going to rip this country off."

Then McKay took off his comic-writer hat and turned somber. Speaking seriously, without humor or satire, he said, "And I looked at the sketch about a year ago, and it's all completely accurate. And sadly it had -- "

I pulled into a restaurant, where I stayed less than an hour. I got back into my car, the radio still on NPR, but this time a different host, and a very different subject matter. Wounded Iraq war vets told their stories.

Staff Sgt. Jay Wilkerson: "Two IEDs hit my Humvee. The first IED hit the left door of the passenger (compartment) and blew the door off the Humvee, and the scout, who was behind the driver, he was killed. His body went with the door. His legs stayed in the vehicle. His name was Staff Sgt. Robert Hernandez. He was also my best friend. And the second RPG missile came, and it came inside the Humvee and exploded. And that's where the shrapnel went everywhere. And at that time, I was knocked unconscious. I woke up in Walter Reed Hospital.

"My family was coming in to see me. I mean family members like my brother, my mother, my sister, were coming and hugging me and kissing -- and I was like, 'Who are these people kissing me?' I didn't know who they were. And I had to learn how to walk again. I was in a wheelchair. Then I was walking with a cane. And I had to learn how to dress myself, how to eat, how to talk again, because I stutter now. You feel like you're a child in a man's body. I can't hear out of my left ear. I have a constant ringing. And my left eye is hurting because it stays dry. It doesn't -- there's no tears. And my face, the jaw is off-line. I had multiple problems with my fingers -- I can't bend my fingers. I'm constantly having neck problems -- I had a C5 (injury). I can't sleep all night. I can only sleep like three hours a day, and that's a good night for me.

"You know, it was actually easier for me if I would have died in Iraq. My neuropsychologist has told me my left side of my brain has been injured severely. So that is your ability to multi-task, to handle problems. So what I do, I watch game shows or look at crossword puzzles, and even though I'm in school or at the VA learning these processes, I do it on my own, to try to speed up my healing process. I'm trying to enhance my own ability because I'm a father. I have two kids. I have to show them that, hey, even though Daddy's not himself, you still have to work hard to achieve something."

I understand opposing the President on policy grounds. I cannot, however, get my head around people like Ferrell and company, who, in effect, tell wounded soldiers that they suffer not because President Bush thought the mission important for national security, not because the President considered Iraq a "grave and gathering danger."

No, they endure their daily ordeal because Darth Cheney and his minion Bush lied -- sending over 4,000 valiant men and women to their graves, with over 30,000 incurring wounds, in order to make their rich friends richer still.