Next Phase in the Trial Subscription to the Green New Deal: Blackouts

Larry Behrens
|
Posted: Jun 07, 2022 12:01 AM
Share   Tweet
The opinions expressed by columnists are their own and do not necessarily represent the views of Townhall.com. 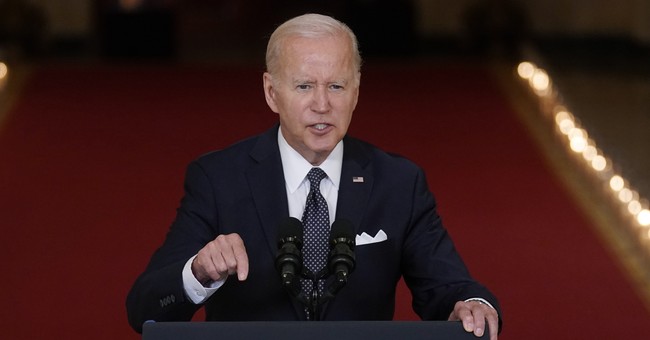 How is everyone enjoying our preview of the Green New Deal? As American families wake up every day to record gas prices, President Joe Biden continues to hit new lows in his approval rating.  The situation has grown so dire that Ron Klain, the embattled White House chief of staff,  checks the price at the pump first thing every morning.

For nearly a month, the United States has “welcomed” a new high gas price...every single day. This streak of failure so large, I actually thought it had to be some kind of record. So, when I reached out to AAA to try and find out if this is the longest streak of daily record-breaking gas prices, they kindly and quickly responded that they don’t know. They don’t track consecutive days of increases or decreases but noted “this has been a long run.” The result? Gas prices have doubled since Joe Biden took office and we’re not even halfway through his first term.

Unfortunately, the worst may lie ahead in the form of widespread blackouts. Think about it: as families all over the country sitting around the kitchen table trying to balance their budget, they may soon have added benefit of trying to do it in the dark.

We didn’t arrive here overnight. In 2015, extreme environmentalists cheered as then-President Obama and Vice President Biden brought plans that pushed Arizona and other states to more wind and solar. Just a few year later, they were beside themselves with joy as the largest coal power plant in the west was closed down in Arizona. Wind and solar were the future and they weren’t looking back! As it turns out, it took less than three years for reality to set in for Arizona and the rest of the country.

From the Southwest to the Midwest and back out to California, blackouts are real possibility this summer. One major reason is the environmental left and their war on affordable and reliable fossil fuels. Biden, along with his environmental supporters, are now all-too-quiet about the threat of not just one, but multiple summers of electrical blackouts.

It’s not that the President Biden and his green agenda supporters don’t know these blackouts are in the future – it’s that they just don’t care. As we’ve seen from the baby formula shortage and the pain at the pump, the Biden Administration’s modus operandi is to ignore the problem until it’s too big and then deflect blame. Don’t be surprised if you see a #PutinsBlackouts hashtag in the next few months.

When it comes to crisis delivered by their failed energy agenda: the pain is the point. They want gas prices to hurt so bad because they actually believe you will suddenly find $60,000 or more for an electric car. Then it should come as no surprise that when temperatures are in triple-digits and the electricity goes out, their callous response will be, “We should’ve embraced a carbon-free grid faster!” Keep in mind, the lights won’t flicker at the White House, just your house.

Let’s be clear, the first 18 months of the Biden Administration is America’s taste of life under the Green New Deal. Record gas prices, once-in-a-generation inflation and the real possibility of blackouts. It is also a trial run for how pushers of this radical agenda will react when our families start feeling the pain. So far, it looks like the best they can do is respond with callous detachment.

It’s not noteworthy that Biden’s Chief of Staff checks the price of gas every morning. It’s noteworthy that he, his boss and their green choir know how much you’re struggling, and they immediately go back to work to keep forcing their failure.

The pain is the point of Joe Biden’s energy agenda, and it doesn’t matter who gets hurt. If our current crisis is the preview of the Green New Deal, let’s all walk out before the main attraction. We’ll have our chance in November.

Larry Behrens is the Communications Director for Power The Future, a non-profit that advocates for America’s energy workers. You can find him on Twitter @larrybehrens or you can email him: larry@powerthefuture.com