Kurt Schlichter
|
Posted: May 16, 2022 12:01 AM
Share   Tweet
The opinions expressed by columnists are their own and do not necessarily represent the views of Townhall.com. 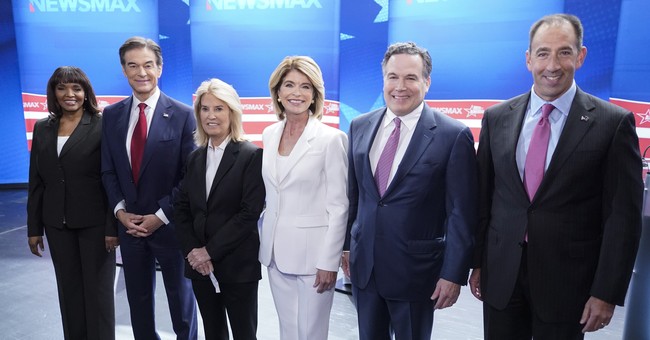 You gotta hand it to conservatives – we get abused and dumped and generally treated like dishrags, but we never stop falling for the latest politician who is going to sweep us off our feet and make sweet, sweet political love to us. Yet maybe, instead of acting on our infatuations, we should be players instead of getting played. Maybe we should banish the starry-eyed romanticism, stop scratching "Cons + Pol" surrounded by little hearts in our Pee-Chee folders and start, as noted political theorist Sir Mix-A-Lot observed in his renowned treatise "Baby Got Back," to "hit it and quit it."

The politicians who fail to satisfy us need to do the crying, not the other way around.

We need to be cads, rogues, heartbreakers. Love and politics mix like Brian Stelter, who is a potato, and gyms. We need to be cold. Ruthless. We need to give them a false name and leave a fake phone number on the nightstand.

Remember, politicians will always break your heart, so stop having one to break. Understand the essentially transactional nature of our relationship with Republican politicians. They are valuable to the extent that they provide value, and when they stop providing value, we start hitting on their hotter roommate.

The Pennsylvania Senate race comes to mind. It's an essential seat and we need to hold onto it. There are five main candidates trying to get our attention, and right now cons are falling in love with Kathy Barnette. She's the nexus of another of these conservative infatuations where someone has a good moment at a debate backed by a compelling personal story and a bunch of us go ga-ga and fall head over heels. But just because we like what we hear once does not mean the other voters who are not as based as us will. Barnette is unvetted and untested – well, that's not true. She was vetted and tested in a race last time, which she lost by double digits. But her ham-handed handling of her military records – which baffled me and I know a bit about how military personnel records work – was a symptom of a bigger problem. She has no team able to prevent things like that from becoming a problem. She's not ready.

Oh, and while I never thought she was some sort of Dick Blumenthal taking personal credit for winning the Tet Offensive from back home, I still had some questions until she put out her DD 214, finally, on Saturday afternoon. That's way too late.

And then there are her old tweets – there are always tweets, and you would think she'd be ready for them to come out, but no. Who knows what else is lurking in her past? Fear not though – while the cons who decided this mystery woman is definitely the one to support for a critical Senate seat because she told a moving story at a debate are not curious, everyone else is, and the Democrats are positively slobbering at the chance to tell them.

Love makes you blind and interferes with your ability to reason.

Of course, Dr. Oz has reached his natural peak and is bound to lose even with his inexplicable Donald Trump endorsement. Luckily, populists are no longer so completely in love with Trump that they heeded his command and flocked to back the foreign national TV guy who lent his support to abortion, gun control and Munchausen mommies in their quest to mutilate their kids. Oz's looming failure is going to haunt Trump, himself a legendary beneficiary of conservative lovesickness.

So who makes sense for the PA Senate seat? David McCormick does, since he's not wacky, and he is a Gulf War vet with no skeletons who the majority of Pennsylvanians won't see as a nut or a novelty. Electability gets a bad rap, but it shouldn't. It's what matters most, and he's the guy who's got it. Carla Sands tried and maxed out at like 6%. Hopefully, she'll throw her support to McCormick and thereby earn herself some future goodwill. The same with electoral footnote Jeff Bartos, though his slimy slanders of Sean Parnell kind of created this whole situation and disqualify him from any position in the party beyond handing out hot dogs at the annual Bumfoo County GOP Picnic.

Some people might fulminate that David McCormick is the establishment pick and Mitch McConnell likes him and hurr durr hurr durr, but even if that's all true, what's the alternative? A cipher who we cons and no one else will vote for? A daytime TV huckster? Losing this critical seat in glorious defeat?

This is about winning.

And there is a hierarchy of winning. We need to get as high on that hierarchy as we can while still winning:

It's not about love. It's about victory. It's about getting the most hardcore person you can. Pennsylvania is not as hardcore as we would like. It just isn't. You might be able to nominate a Kathy Barnette because she's ultra-mega MAGA, but the regular voters who have never seen "2000 Mules" are not going to vote for her. They just aren't – and arguing that regular voters will fall for her too because reasons is a symptom of this bizarre conservative tendency to be blinded by love for the conserva-heartthrob du jour.

It's the same thing in Missouri. Eric Greitens? Bondage boy? Are you kidding? You know what happened to the last person in a love affair with that weirdo, right?

This is about ruthless calculation in the service of victory. Now, if Barnette or Oz ends up the nominee, I'll be their No. 1 supporter. Same with Greitens. And I'll watch them all get defeated. But that does not have to happen. You have a David McCormick in PA. You have an Eric Schmitt in MO. You don't have to lose. All you have to do to win is not fall in love with a loser.

Conservatives Must Stand Together and Fight. Join Townhall VIP. And Check Out Last Week's Stream of Kurtiousness, You Would Think Democrats Want to Win Elections. And my podcast, Unredacted.

Go pre-order a book that doesn’t suck – We’ll Be Back: The Fall and Rise of America owns the libs as it discusses all sorts of terrible scenarios that America might well face. National divorce. Civil war. Barren wine women. And don’t forget my Kelly Turnbull series of conservative action novels. The latest is The Split, but get all these action-packed bestsellers, including People's Republic, Indian Country, Wildfire, Collapse, and Crisis!