Kurt Schlichter
|
Posted: Jun 25, 2021 8:10 PM
Share   Tweet
The opinions expressed by columnists are their own and do not necessarily represent the views of Townhall.com. 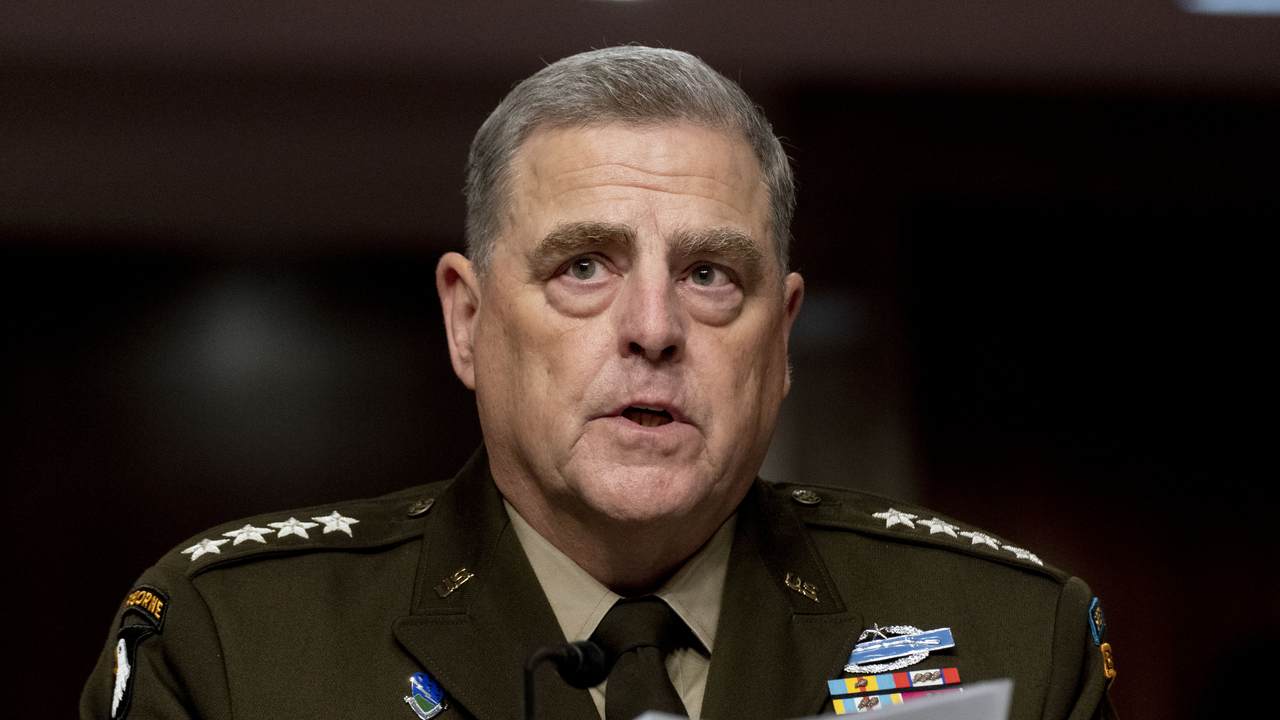 Hi, everybody! Welcome to the latest edition of "Stream of Kurtiousness," the Townhall VIP special video feature where I sit and talk about stuff, things, and do-ins. So here we are. Let's go. What do we got?

We got drag queen shows at Air Force bases. Not just any Air Force base. No, it's Nellis Air Force Base, home of the fighter pilot training school where you're supposed to forge on the anvil of combat training the world's greatest fighting force. They had a bunch of dudes dressed like chicks walking around, and this was an official sponsored event, and it's like, what the hell is going on? A drag show, folks. A drag show.

Want to know what else is a drag? Not having won a war in 20 years. That's a super drag. And it's really, really annoying. It's getting old. It's getting tiring.

Let's face it; our military is in a really bad way. It's a disaster on every level.

Did you see Chief of Naval Operations Admiral Mike Gilday, Four Stars, get up before Congress, and they start asking him embarrassing questions like why are you having our guys read Henry Kendi Ibram Rogers whatever the hell his name is?

Here's the thing, everybody goes, "Well, Kurt, aren't generals conservative?" Well, they're conservative as an adjective, not conservative as a noun. Okay? They're not like you and me. Keep in mind, they're at the top of the pyramid in a socialist organization where they tell you what to do, where to go, what to say, what to wear, who you're doctor is going to be; they tell you everything. And if you're a general, you really like that.

Now, I was Guard as well as Army. I was active duty and Guard, so I kind of had both of those worlds, but when you're Guard, you tend to, I don't know, have a freaking life. And you know, we would get attitude from the active duty guys, "You're not a real soldier." And I'm like, "Well, I had to meet every standard you did to become a Colonel." Every single one, including War College, which you didn't need to be a Colonel, but it still helped. So, I did that, and I was successful. And I was successful at an entirely different career, too.

There was a little healthy competition, but now, it's a total sh**show.

These guys are socialists; they are not conservatives like you or me. In fact, they distrust it, because as conservatives, we believe in empowerment. We believe in pushing down to the lowest decentralized level the authority of people to run their own lives. That's everything generals hate!

You know, here's what the generals do, and here's how we look at things out in society.

We have guys who drive drunk. They go and get sh**faced, get behind the wheel, and we say, "Oh, well, arrest that guy and charge him with a DUI." The generals think, "Holy sh**! We have to ban alcohol!"

It's a different mindset. So, it's not surprising to me that these guys who, by their nature, are responsive to their boss. They do what their commanders check. Army General Mark Milley, remember this guy? I think he was a Delta Force commander. He has a bunch of medals—a totally brave guy in combat. Sh**, I ran a heavily armed carwash. I'm not freaking Audie Murphy. I'm not Pete Buttigieg, guys. Milley was a badass, and people say, "Look, he was a great battalion commander." BUT...

BUT...now, in his current position, he's a great sycophant for the establishment. Remember, the Army War College is not about war; neither is the Navy War College or any of the others. And as I like to point out, the Army War College is the Party War College. No, it's about civilizing you so that you don't scare the sh** out of the civilians you have to interact with. Now, a lot of people say, "Well, all generals are politicians." Well, yeah, because they have to be.

If you're a Four Star, you are a prince. You literally have an army of hundreds of thousands of guys. You are literally more powerful than about all but maybe ten countries in the world as a single Four Star in the American military. So, yeah, they're political. They're supposed to be. That's their job; they interact with international and domestic figures. The purpose of the War College is to break you so that you don't say anything that makes the civilians sh** themselves.

So, you get nonsense like a bunch of Colonels getting together on a kind of normal exercise. A normal exercise would be, "You four Colonels, get together. Identify America's greatest strategic threat, brief that to us on Saturday, and on Sunday, brief your plan for addressing it. The most basic kind of War College exercise you could have.

And half of these dumb mother****ers, will come back and tell you, "The biggest danger, the biggest threat to America is climate change." The f***in' weather, right? The weather. Okay, I don't know about you guys, but there's the Red Chinese. And now, it's even worse because the other half is going to say, "Well, you know what it is? Extremists, white supremacists!"

You know, it's really interesting that there's a threat out there with literal guns, called China, and these guys can't seem to be bothered, but you know, a bunch of grandmas wander into Capitol Hill, take a bunch of selfies, no one has any guns, that's their biggest strategic threat.

This Milley guy, and again, super brave guy, but his response is to the command, and the command is, to the extent that he's conscious and not a zombie, President Asterisk, or whoever's holding the puppet strings on that desiccated, old Pinnochio. Who is your Geppetto, President Asterisk!?

Anyway, so Milley's all in on this, and he goes to Capitol Hill, and what does he say? He gets in his military huff. And remember, they will leverage their military service. "You can't question him! He's got a bunch of military ribbons!" He does have a bunch of military ribbons. He has a Purple Heart; he's been all over the place, looks good. But he's a freaking government employee, and he has absolutely no right or authority beyond what we, the American citizen, give him.

Let me talk chain of command here real quick – God, American citizen, the president, Milley. Do you see how that works? Now technically, Milley is the Chairman of the Joint Chiefs of Staff and is not in the chain of command, blah, blah, blah, shut up, okay? We're not doing that, War College nerds. You know what I mean.

Anyway, he gets out there, and he gets all huffy so that you can't confront him, "We study many things. We study the works of Lenin and Mao. Why wouldn't we study Henry Rogers, aka Ibram Kendi, the ridiculous, non-deplume of that hacky race hustling piece of sh**?"

Well, bad argument! And, of course, here's the problem, when you're a general, no one tells you that your arguments suck, that you're not making sense. Are you saying, general, that when you study Mao and Lenin, you put those freaking things you find out about them into operation? Because you're doing that with Kendi. You're doing this race hustling bull****. And he says, "I want to learn the roots of white rage." Yeah, a bunch of grandmas taking selfies in the freaking Rotunda. There's your white rage! Holy sh**.

I have a different view. I'm thinking maybe you should, I don't know, with a f***in' war once in a while.

And then you have President Asterisk wandering out. And you know whose fault it is for the crime in big cities? It's you guys, who aren't committing crimes, don't live in the big cities, but you have guns legally, as opposed to Democrats who are allowing other Democrats to kill other Democrats with guns they're not allowed to have in Democrat cities, which somehow is your fault. It is always your fault.

President Asterisk says, "Matlock! I want my mush?! Where's my gruel!" He finally gets there and says basically, "Your guns aren't going to help you against the government. You need F-15s and nuclear weapons."

Bad argument! On a couple of levels, like telling me you're going to kill me if I don't obey, does not make me more likely want to be, I don't know, disarmed by the likes of you.

Now maybe Milley should talk to him about this because if there's anyone who knows about getting his ass kicked for decades by a bunch of disorganized guys with rifles, we call that Afghanistan, it would be Milley. Because again, for 20 years, they've failed to win a war, and as this is going on, the Taliban are sweeping through and taking over Afghanistan again. Win a freaking war, and then come back and front, okay? Because you're like 0-4 in the last 20 years.

First of all, don't be intimidated by these guys. They work for you. Yeah, he's a general. Yeah, he was really brave. Yeah, he's an a**hole because he's promoting this kind of racial hatred that has no place in any American institution, much less our glorious military, an institution that has done more for human dignity and rights and justice and freedom than any other organization in human history. An organization that set the standard for treating people like Martin Luther King taught, through the content of their character, not through idiotic constructs like race and gender and ethnicity and all that other bull**** that people like Milley are allowing to be injected into our military. It is actually a disgrace. I'm so disappointed I can't even express it.

Moreover, folks, I'm terrified. I'm terrified that they're going to get people killed because what they're doing, between the drag shows and the anti-racist agenda and the "let's hunt the mysterious extremists taking selfies," is demonstrating that they are an unserious military and this is a very, very, serious time.

The people who are going to pay are not the children of the government flunkies and the academics trying to push this CRT bull**** on us. It's our kids. Because our kids, the kids of normal Americans, the kids of patriot, Americans, are the ones who march down to the recruiting station, who sign their papers, who pick up a weapon, and deploy when we ask them, and they're the ones who will pay the price in blood for the lack of preparedness and the lack of seriousness that we are seeing from our military. It is intolerable.

I await the day President DeSantis appoints his team of veteran retirees who know the score and who know the game to go up to the Pentagon and clean freaking house.

This is the "Stream of Kurtiousness," I'm Kurt Schlichter. Follow me on Twitter @KurtSchlichter. Go join my Locals page. It's amazing. I want you to get my books. The new one is coming out very, very soon. I'm working on that. Read all of my stuff. I will talk to you soon. Bye!