Kurt Schlichter
|
Posted: Dec 14, 2020 12:01 AM
Share   Tweet
The opinions expressed by columnists are their own and do not necessarily represent the views of Townhall.com. 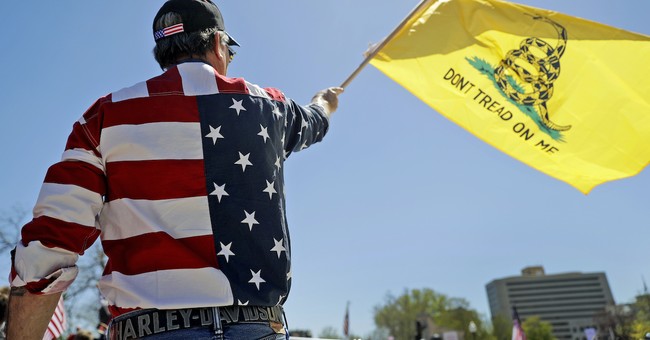 There’s an undeniable pleasure in imagining the blue states cut off from America and forced to fend for themselves without normal Americans to feed them, fuel them, and defend them from the kind of dirtbags they kiss up to in order to show us knuckle-dragging Jesus-folk what for. But secession is a terrible idea, for them, but more importantly, for us. And while I don’t think America will unravel anytime soon – though those of us who read real history instead of silly oppression studies dreck understand that all great civilizations do eventually collapse – it remains possible that our country could fall apart in the short-term. Heaven knows the idiots in our useless Establishment seem to be doing everything possible to make that happen. That thought itself should be enough to inspire you to get fighting for the Constitution, using its provisions twice as hard despite the election theft last month, while hedging your bets with a 5.56mm rainy day fund.

Yes, the irony is clear that a guy like me who drew the fussy, femmy ire of the cruise-shilling Fredocon hacks and their cheesy blogs over his best-selling books about America splitting into red and blue nations is saying "Secession no!" Yet I was never a supporter of a national divorce, as tempting as it is to walk out on the libs for a younger, hotter, and less annoying partner. My five conservative action novels are based in a world where the country is ripped in two by the Left, and the latest, "Crisis," takes place as this schism is happening. There’s action and humor, and Eric Swalwell shows up – no, not with some Chi-Com hooker, but definitely with the pungency for which he is renown – but it all looks far too much like real life to be comfortable. My books are a warning, not a how-to manual.

These clowns absolutely could push us to the breaking point. A President Biden* would be bad, but on the upside, Grandpa Badfinger is a creaky zombie whose "Matlock" marathon-focused lifestyle is not conducive to big changes. Yet the activists brought inside the gates inside their Trojan donkey, including Kamala "Here, Have Some Cookies I Baked For You, And Why Yes, They Are Supposed To Taste Funny" Harris, do want to push the fascism envelope. They think they are just a few decrees away from subjugating all us Lord-loving, gun-having, gender-understanding Neanderthals forever.

What they don’t see, because they don’t know any normal people – and occasionally saying "Hola" to their gardener does not count as knowing normal people – is how furious we are. Elites don't feel our anger, mostly because elites are behind their walls guarded by normal people with guns who may soon have to decide where their loyalties lie, with their own people or with their masters.

Yes, there is the potential for serious violence and even secession. It still seems unlikely – using our Constitution and its provisions remain the best way to sweep away the petty tyranny and the electoral fraud – but it could happen. Normalizing the BLM/Antifa/Other scumbag violence last summer was pretty short-sighted by the people who don’t have most of the guns. But hey – we have what Glenn Instapundit Reynolds has accurately assessed as the worst ruling class ever, so poorly-thought out initiatives is par for the course.

Here’s a positive thing: Secession and massive violence are unlikely because the people pushing the SJW agenda just aren’t likely to put themselves in a place where they can die for their ridiculous beliefs. Yes, there are exceptions – mostly the criminal element that gloms onto the Left of the kind Kyle Rittenhouse expunged – but a lot of these young leftists who would presumably be the vanguard of the revolution feel they have too much to live for to get hurt. Putting yourself in real danger – not performative risk at some mini-riot where you know the cops will sit back and, worse case, you end up arrested and released with a warning – over…pronouns?

On the other hand, I do see a lot of people on the Right motivated not by some ridiculous cant about systemic racism from their man-bunned TA but by the defense of their religion. And a lot of them are older and figure, "Hey, I had a good run, and my knees are too sore to start living on them." Oh, and lots of them are vets, and they all have guns.

Yes, the potential is there for conflict. If the malignant Left pushes the already volcanically angry normals too far, stuff could go south. The liberal campaign to strip normals of their rights, property, and dignity is poorly thought-through. Sure, it’s fun for the elite to get their jollies messing with us, but the thing that keeps the lid on this boiling pot is that right now, most people have something to lose. But if you take everything away from someone, he becomes extremely dangerous – something the epically unwise ruling caste, most of whom have never been in a fistfight, don’t get.

But what if we split in two voluntarily? Wouldn’t that solve things? We in red America can keep living in America, and the blues can have their Venezuela del Norte. My books take place in that scenario. It’s a bad scenario.

There’s a reason divorced people don’t buy houses next door to each other, but that’s what a national divorce would mean. Do you think for even a second that we might get along? As the natural consequences of liberal policies, unmoored and unrestrained by patriots, create crime, poverty, and general misery, in a real-life "People's Republic," could you imagine the ruling class of the blue states looking at the wreckage they created and saying anything other than, "Well, obviously all our problems are the result of red state racism!"

It's not like they would invade us. My books look at the ridiculous PC world of a blue military – but who is to say they wouldn’t invite in their pals, partners, and procurers, the Chi-Coms, to help out?

Remember how you keep your friends close and your enemies closer? We want the tech companies, the corporations, the media, and the rest of the institutions within our country where we can begin the process of crushing and taming them, not off in some other nation where they are untouchable. Our wokeness in light of the last few years of establishment misbehavior has created a ruthless resolve to break these garbage institutions to our will. We can’t do that if they can hide across the border in Neo-California.

Still, the blue checks talk a big game about the blue states living without us, but you can’t grow enough kale in the garden box outside your NYC apartment’s window to survive no matter how skinny your jeans are. And when the rulers of the blue states realize that they sacrificed their ability to generate energy, and thus run their Teslas and fuel their pedo express jets, on the altar of the climate hoax, they’ll be sad. If you could eat and power stuff with undeserved smugness, they’d be all set. But they can’t.

But hey, lib secession jerks, you can always move your sorry butts to Canada.

If you want a preview of secession in all its glory, read my Kelly Turnbull conservative action novels "People's Republic," "Indian Country," "Wildfire," "Collapse," and my latest bestseller, "Crisis." Trigger Warning: They mock liberals hard. And they are far too close to reality for comfort.