Kurt Schlichter
|
Posted: Oct 01, 2018 12:01 AM
Share   Tweet
The opinions expressed by columnists are their own and do not necessarily represent the views of Townhall.com. 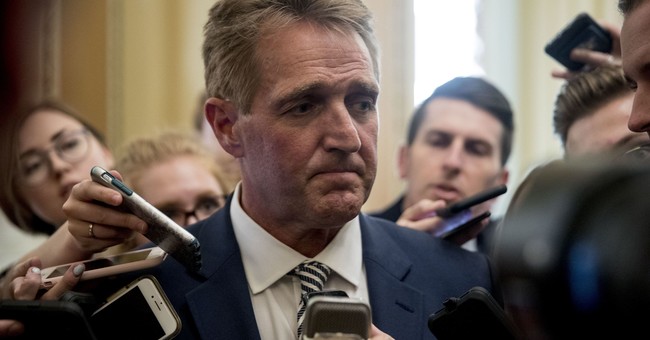 That simpering sap Jeff Flake – he’s the kind of guy who voted for Evan McMullin and still doesn’t regret it. It’s sad to see what was once allegedly a man be utterly emasculated in public and then proceed to dance to please his new masters. He ought to be, and henceforth shall be, known as Jeff! since he’s essentially Jeb! without the pedigree or – here’s the scary part – the spine. Yeah Jeff!, you’ll get your one-shot 60 Minutes tongue bath, and there’s probably a 3:00 a.m. Sunday MSNBC program in it for you, wedged between reruns of Lockup. A hosting gig for a crappy show on a doofus network is today’s equivalent of 30 pieces of silver.

Flake does not care about you Normals, especially you Normals from the Grand Canyon state who are now regretting your decision to send McCain Superlite to the Senate. At least John McCain, for all his faults, flew fighters and took no guff; Jeff! takes a little guff from some shrieking leftist in an elevator and he’s suddenly primed for his Democrat buddies to talk him into helping carry some of the wood for the Brett Kavanaugh witch burning.

The “Democrat buddies” part is key. See, they are his real constituency. Like all Fredocons, he chose trying to please his elite pals over keeping his promise to serve Normals like you. But, of course, he’s been doing that for a while, ever since he was so greatly disappointed in you for choosing Donald Trump and not Moby McMuffin or even Felonia Milhous von Pantsuit. So, it was no surprise that the Dems ID’d him as the weak link, swarmed, and rolled him. In a town like DC that is known for changing the soft and feckless, Jeff! was especially mushy and feck-free.

My new book Militant Normals: How Regular Americans Are Rebelling Against the Elite to Reclaim Our Democracy explains why Jeff! and his sorry ilk side against the people who send them to Washington, and it does it in a lot more detail and with a lot more snark than possible in one column. You must order it now because it comes out tomorrow. Order it to own the libs and the conservasissies.

Jeff!’s flake illustrates the disconnect between status-obsessed elites and the Normals. Jeff! wanted his pals to think he was sensitive and caring and concerned with process and blah blah blah. He wanted the elite’s acceptance, and if Kavanaugh’s family had to go through more hell, okay. He knows this is all a scam. He knows this is a grift. He knows it’s a delay designed to let Stripper Matlock or some other bottom feeder come up with a new pack of lies about how Brett Kavanaugh ran an international sex ring during his Bud Lite blackouts back in ’83.

But Jeff! mostly had to do what the elite in this country do instead of actually achieving anything – he signaled. He signaled to his elite pals, “Hey, I’m one of you, not one of them, not one of those icky Normals.”

And, while they will pretend to welcome him and give him a seat at the cable kiddie table, they are laughing at him.

Fortunately, he’s gone. He quit knowing the people of Arizona would vote for a rotting cactus rather than him in the GOP primary. Of course, to Jeff!, what happened is that the people of Arizona grew unworthy of him. They no longer meet his exacting standards. Jeff! is too good for them, to pure, too elite, so he sadly must to deprive them of his virtue.

It’s happening a lot. The sissies, punks, and RINOs are going away. The hacks of Conservative, Inc., are right about one thing – it’s a new GOP. It’s a GOP that fights. Oh, not all of them. You still have weak sisters like Collins and Murkowski. Collins is safe because she’s about as conservative as Maine is going to get, and Murkowski is getting primaried if she backstabs us. But Normals have put righteous fear into the rest of them.

The conservagimps want to claim that the Republicans are now the Party of Trump, but that’s a self-serving narrative designed to obscure the fact that they brought their downfall upon themselves through their legacy of failure in the fight against progressivism. Donald Trump is the avatar of the Militant Normals. None of the establishment was fighting for their rights and their interests, so they found someone who would and would not apologize for doing so.

Our new crop of candidates gets it. Except for that insufferable loser Mitt Romney, the McMullin of 2012 who can’t help but suck up to the establishment and media who humiliated him by thanking them and asking them if he may have another, the candidates looking to win in red states are solid. With the Kavanaugh atrocity activating conservative-leaning Normals, we stand to do very well – assuming we don’t get petulant because a few has-beens have collaborated with the enemy.

Kavanaugh is a boomerang that can come back and knock the Democrats out. They counted on stripping off the suburban women’s vote that had been going GOP. But those suburban women have sons, brothers, and husbands whose lives can be ruined in an instant over some uncorroborated baloney from three decades ago if the Democrat’s new rules go into effect. A vote for a Democrat is a vote against due process, a vote against justice, and a vote against men.

That’s a pretty crummy platform if you are seeking to appeal to Normals, but inside the elite bubble it makes perfect sense.

So, focus on the fight. Don’t play the Democrat’s game and walk away from the GOP because Jeff! walked away from you. He’s a nobody who will be gone in a couple months. He’s nothing. In Kavanaugh teenspeak, Jeff! is just a bouf in the wind.

Tomorrow, my new book Militant Normals: How Regular Americans Are Rebelling Against the Elite to Reclaim Our Democracy takes on these goofy dorks and their liberal masters in no uncertain terms. Preorder it now so you’ll get this potent vaccine against conservaweeniness injected directly into your veins on the release date, Tuesday, October 2nd!