Liberal Elites Are Even Ruining Hamburgers And They Must Be Stopped

Kurt Schlichter
|
Posted: Sep 20, 2018 12:01 AM
Share   Tweet
The opinions expressed by columnists are their own and do not necessarily represent the views of Townhall.com. 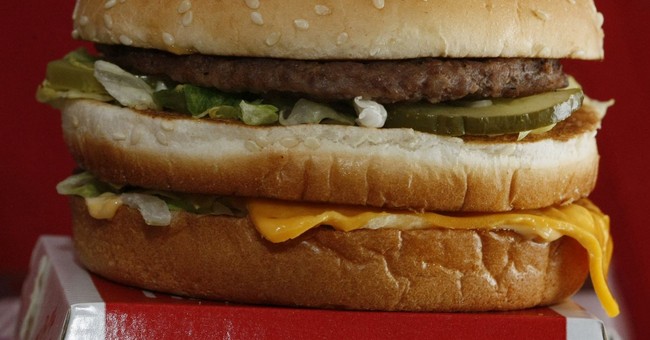 Liberals can’t be happy with simply ruining the lives of decent conservatives for cheap political gain. They have to ruin hamburgers, too.

The burger is the ultimate Normal food, and horrible liberal elitists are trying to screw it up with lame alternative burgers because they are terrible.

Let me be clear, to quote an awful ex-president: Nothing I write here is open to debate. I’m turning the epistemic closure thing back on the libs. It is impossible to disagree with my ground beef rantings, and if you do, you are racist, sexist, and a burgerphobic cisdinner hate criminal of hatred.

Let’s clarify something else. Hamburgers are the King of American Casual Food. You can eat it in a bar, you can eat it in a car. Just don’t eat it in some trendy coastal eatery because they’ll screw it all up and you’ll end up dreaming of a Big Mac.

Sloppy Joes are gross. They are burgers’ ne’er-do-well little brother, 35 and living in the basement nursing emotional damage because mom liked burgers better. And who wouldn’t? Sloppy Joes are orangey muck plopped onto a bun. They provide none of the firm but juicy consistency, or the satisfying interplay of extras and condiments, that make the burger nature’s perfect food. They are mere goo and are unworthy of a proud and free people.

Naturally, artisanal Sloppy Joes are probably about to become a thing.

Hot dogs are likewise terrible – what the hell is a hot dog anyway? With their troubling shape, unnatural smoothness, and nauseating consistency, the hot dog is a mutant entrée, a devolved sausage without flavor or purpose. You have to waste perfectly good chili – chili that should be in a bowl topped with sour cream in a just universe – just to make a hot dog taste like something.

Even the name is unappetizing, unless you are Obama. My kid says hot dogs are really tacos because of the bread V, and he makes a good point. Except tacos are tasty and hot dogs are awful.

Eat a burger, like a man, damnit. And don’t be a Fredocon and whine about how the bun has gluten.

Millennial elitist dorks are all about screwing up burgers. “Gourmet” burgers, they call them. But they are a sad simulacrum of true burgers, and a crime against nature. The menus of those precious gastropubs that spring up in the gentrified blue coastal urban centers are loaded with “specialty burgers” with cutesy names and inane combinations of ingredients. It’s sad. Unable to create anything of value, these goateed hipster monsters can only pervert and deform that which is pure and beautiful. A burger is simple goodness. And, as they do with everything else, liberals screw them up.

A burger requires, at the threshold, good meat. There lies the first problem. This meat must come from a cow. But many of these dorks will try to create a sort of patty from something else, like (shiver) vegan pea protein. Note that peas are terrible, and only by putting them on a burger in place of a beef patty can these offensive soft green nuts be made worse.

This is an abomination and if you ever encounter one, call an exorcist stat.

But the elite can even screw up meat. Somewhere along the line, maybe when the waygu craze started, they decided that soft, tasteless beef with the consistency of wet newspaper was the bomb. You get an $18 burger (I live in LA – air costs $1 a breath) with this fancy meat, and it’s like mush. Why is it so hard to make “good meat” actually good?

But it’s artisanal, which means overpriced and bad. “Oh, the cow was grass fed and massaged and hugged and it’s favorite band was Styx,” they’ll say, like I want to be friends with the damn Dinner Horse. I want to eat it, and I want it to taste like beef. But fancy elitist liberal beef doesn’t taste like beef. It tastes like ruined dreams and the Deep Thoughts of Kamala Harris.

Beef. Normal beef. You can fry it on the grill or cook it over a flame – see, I totally embrace diversity – but it can’t be some weird mushpatty. Not if you want a burger instead of some pathetic charade on a bun.

The bun. I’m open minded. You can do the traditional sesame seed style, or a potato roll. If you want to get kinky, throw it on rye for a patty melt. I will even accept a ciabatta in some cases. But a pretzel bun? What the hell is that?

Stop doing horrible things just to try to freak out the squares.

American cheese is the quintessential burger cheese, and the name probably explains why liberals hate it. Cheddar is acceptable. Bleu cheese? That’s borderline – sure, I’ve tried it, but who hasn’t gone through an experimental phase?

Things to put on burgers break down into condiments and other stuff. Optional condiments include mustard and mayonnaise. Not Miracle Whip. I am not even sure what that is. Also, no Sriracha, no guacamole, no BBQ sauce. Mandatory condiments are ketchup and more ketchup. One of a hamburger’s key roles is to serve as a ketchup delivery system. There’s this one trendy place in LA that will remain nameless and patronless that serves this weird tomato fruit roll-up it calls a “ketchup leather.” They got the leather part right. The burger, which hipster doofuses rave about, tastes like an old shoe.

Special sauce aka thousand island dressing aka ketchup + mayonnaise is an acceptable alternative to ketchup. Note that “ketchup” does not include “catsup” or grody Whole Foods/Trader Joe’s “organic” ketchup. The only good ketchup is mass-produced stuff you buy in a regular supermarket where they don’t sell kale.

Other stuff. Bacon? Not my scene but I won’t judge. Lettuce? Eh? Take it or leave it. Tomatoes? Yes. Pickles? Yes. Onions? Yes, grilled, fresh, or – if you are awesome – both. But nothing weird. No “tomato jam” or “onion chow-chow.”

It’s not hard. Don’t be weird for the sake of being weird and you’ll have a decent burger. Start messing with something that works and you get Obamacare.

My upcoming book Militant Normals: How Regular Americans Are Rebelling Against the Elite to Reclaim Our Democracy  contains no burger recipes, because normal people don’t need burger recipes. Normals take meat, throw it on a grill, put it on a bun, put some stuff on it, and eat it like the heroes they are.

And liberals? They screw up everything they touch. The arts. Academia. Dinner.

So, confirm your normality by rejecting burger mutations. And confirm Kavanaugh, too.