Kurt Schlichter
|
Posted: Apr 02, 2018 12:01 AM
Share   Tweet
The opinions expressed by columnists are their own and do not necessarily represent the views of Townhall.com. 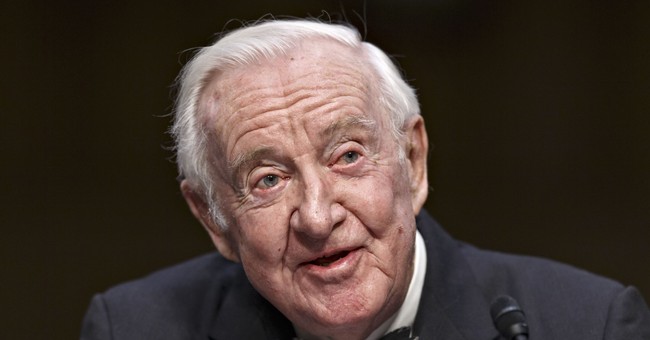 Let’s start with the basic premise that the GOP establishment is terrible, and as its defining characteristic, its cowardice is only overshadowed by its sheer incompetence. But even those hacks might be able to win the midterms and keep hope alive for the resurrection of the America we love. It’s all thanks to the aggressive scumminess of our leftist enemies – and yeah, anyone proposing to take my God-given rights to speak, worship, and defend myself, and/or my life, all of which they have recently told me they seek to take, is my enemy.

After the groveling cave that was the Omnibust, many of us were completely demoralized and ready to toss in the towel. The Fredocons were delighted, their dream of a return to relevance and power seemingly within reach once the people these rubes, hicks, and upstarts elected get booted out of office. The Democrats were giddy. But fortunately, the Democrat establishment is even dumber than the GOP establishment. They and their liberal media pals immediately decided to push the Junior Red Guards to the forefront and, joined by an ancient and silly former Supreme Court justice writing in the New York Times, demand that we give up our guns.

Oh boy, did we ever notice. And we also saw that these people were not just intent on leaving us disarmed – they wanted us silenced too. They demanded we sit quietly as the Junior Commissars led the show trial against us, convicting us of having blood on our hands for things we didn’t do. They freaked out that Kevin Williamson got a gig at the Atlantic. And they tried to drive Laura Ingraham off the air. But hey, I bet they’ll totally respect our civil rights once we are disarmed and they have a monopoly on force.

Chet the Unicorn will totally take that bet.

So, the last few weeks showed us what we seemed to have forgotten – that this is an existential struggle, currently cold but due to leftist stupidity and malice it could possibly turn hot, between Normal Americans who demand their civil rights and a say in their own governance, and a liberal-leaning elite that considers Normals’ interests illegitimate and wants us silenced and submissive in the face of their unchallenged rule over our lives.

Thanks for dropping the mask, you libfascist creeps. The future they want is Venezuela II: Welcome to Serfdom. Now we Normals are once again motivated to stop you from goosestepping the United States down the road to tyranny.

So, we’re pumped and ready, and if you’ve seen the President speak lately, you know he is too (His CPAC speech made it clear that this uber-competitor has no intention of losing in November). But now the Republicans in Washington need to get out of their gimp boxes and act.

Take notice, GOPe: If you want to keep your jobs, you need to stop going on vacation and perform.

Mitch McConnell gets a lot of grief (I think he’s usually a savvy legislative knife fighter, though many of people I respect disagree), yet it’s indisputable that he could convert himself from base zero to base hero overnight. All he has to do is step up to the mic and say, “Starting at 8 a.m. Saturday morning we begin the 30 hours of debate on America’s next ambassador to Germany Ric Grenell. I’d advise my friends across the aisle to bring their sleeping bags n’ jammies because we will go one nominee after another, 24/7, until either all the President’s nominees are confirmed or they agree to unanimous consent to proceed on final votes. The horse hockey stops now.”

And then he needs to do it.

Conservatives would be seeking a smoke and a cuddle. The other side? Not so much. The herd of motley Democrats running in red states is not going to dig being cooped up in the Capitol for weeks on end without a chance to go home and lie to their Normal voters about how they don’t morph into liberal ventriloquist dummies for Chuck Schumer the second they touch down at Reagan National. This means the Grenell Gambit has two political benefits, as well as the patriotic benefit of getting us a terrific ambassador in continental Europe’s most important country. It pumps up our side’s morale because we see the GOPe not taking anymore…guff…from these hacks. That’s huge, and would go a long way to getting some base confidence back in Mitch McConnell. Plus it makes it harder on the Democrats holding seats we want to win.

Democrats, particularly ones from America, say they believe in the right to keep and bear arms? Great, let’s let them prove it. How about Paul Ryan get someone to introduce a bill called “The Right to Defend American Families and Freedom Act” that says, “In addition to the individual right to keep and bear arms cited the Second Amendment, this Act separately provides that all law-abiding, healthy adults have an individual right to keep and bear effective firearms for lawful activities including sporting activities and to defend themselves, their families, their communities and their Constitution.” And it should provide for attorney’s fees award and litigation priority for any American citizen forced to sue to secure his rights.

Let’s see the Democrats sweat when called on to vote on that one. See, we need to give them hard, painful choices designed to either allow us to enact laws to protect the rights of us Normals, or to put the fake-Blue Dog Dems in the agonizing stress position of having to vote against such popular laws – which our candidates will promptly jam down their throats in November.

Here are some more proposed laws we should force them to go on record about. Gotta love that expansive liberal reading of the Commerce Clause!

“The Protect American Workers Act.” Let’s allow American workers denied jobs that have been filled by illegal aliens the right to sue the hiring companies for damages, penalties, and their attorney’s fees. Oh, and while we’re at it, we can add a provision that if you have stolen an American citizen’s identity while here illegally, you can never become a legal resident, and your pathway to citizenship leads back to that hellhole you’re actually a citizen of.

Gosh, Dems, why do you hate American workers?

“The Transparency In Social Media Anti-Censorship Act.” We must demand transparency and adherence to their terms of service, so let’s impose some due process requirements. If Facetwittergram decides to censor, suppress, or otherwise treat a person differently in any way because of his political views, it must clearly and publicly disclose exactly how the terms of service were violated, what the company did, and why it did it in a formal letter while providing rights of appeal for the user through private arbitration at the company’s sole expense (A private arbitration for even a minor matter costs in the five figures minimum). A winning user would recover his fees – but not a winning company. One-way fee awards are very common in civil rights and consumer cases so as to encourage individual citizens to protect their rights, you know.

Oh, and the company must eliminate all retained data from the individual kicked off – that seems only fair that the tech company can’t keep the data if the user can’t keep his account. Identifying and scrubbing all the collected data would be a huge hassle and therefore disincentivize online fascism.

And if the tech company fails to do any of this precisely as required by law, or acts outside its terms of service, uh oh. Then individuals can sue in court and be entitled to substantial penalties for violations, along with (one-way) attorney’s fees. You know all those lawsuits under the Americans with Disabilities Act that result in urinals being hung on the wall at ankle level? That, but against social media censors.

Gosh, Dems, why do you side with big tech companies against American citizens just trying to have their say?

“The Discrimination Against Citizens Exercising Their Constitutional Rights Act.” Tired of big corporations – who are overwhelmingly not conservative but are, in fact, undeniably led by members of the liberal elite – using their power to trample our rights? Let’s outlaw the current trend of companies like Citibank that seek to use their corporate power over society’s infrastructure to limit Normal Americans’ exercise of their rights. Once again, let’s turn the lawyers on them! A class action suit by 20 years olds against Citibank for interfering with citizens’ free exercise of Second Amendment rights by refusing to do business with entities lawfully selling young adults firearms? Count me in – I’ve been eyeing the new BMW 6-series convertible.

Gosh Dems, why are you siding with big corporations against the little guy?