Kurt Schlichter
|
Posted: Mar 15, 2018 12:01 AM
Share   Tweet
The opinions expressed by columnists are their own and do not necessarily represent the views of Townhall.com. 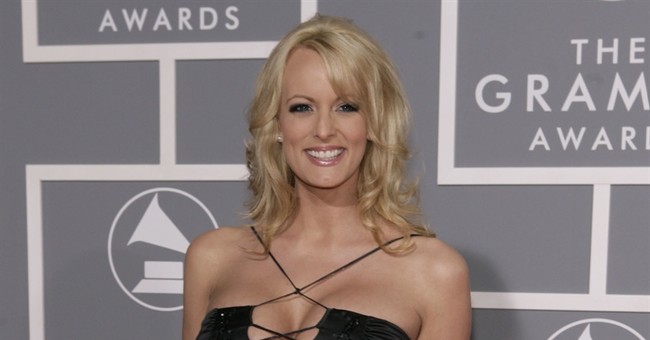 And you can almost see the liberals drooling. You can see their Fredocon gimp bros’ nodding their vinyl-encased heads.

Yes, yes, this is finally it! This time we’ll strip Donald Trump’s supporters from him because he failed to meet the standards we think our opponents should adhere to! This time it will work!

I don’t mean that we are simply unconcerned about Donald Trump’s past hobbies. I mean that our depth and breadth of not caring is so deep and wide as to create a critical mass of not giving a damn of such intensity that it is brighter than a million suns.

We just don’t care what Trump did with his pneumatic bimbos – to the extent anyone even believes them. His critics don’t really seem to. They never gave a damn about this stuff until a Republican allegedly did something. Or until one did nothing – they were outraged about Mitt Romney too.

Perhaps we fail to meet the moral standards of people who already call us racist, sexist, greedy, stupid, and all sorts of other stuff. You heard what Felonia Milhous von Pantsuit said about us. Hell, we are murdering children by sticking up for the Constitution, remember? But gee, it seems that this time we have really disappointed them. This time it’s totally serious. We’ve really done it now. Now our enemies are going to think really, really badly of us.

We talk a lot about the New Rules, and how the liberals and their lackeys are going to hate them. Well, they certainly do hate them. No, not because they have something against kinky side action. There’s no need to remind these hypocrites of their affinity for Bill Clinton, he of the human humidor and the Oval Office bad aim. Oh, and don’t forget the Lion of the Senate, Teddy “Vroom Vroom Splash Splash” Kennedy, the chef who liked to whip up the occasional waitress sandwich after getting staggeringly hammered. I once saw him stumbling out of the senators’ elevator when I interned on Capitol Hill – he smelled like a distillery and his nose was redder than Rudolph’s. So when liberals start telling us we should freak out and abandon a Republican who’s laying down the smack on Obama’s legacy because he used to indulge in his own reindeer games, well, that’s just not happening.

I remember when we used to talk about character counting, but you know what? Our opponents mocked us for being uptight and uncool – remember all the talk about how sophisticated European leaders all had mistresses? Oh, us repressed hayseeds and our sanctity of marriage nonsense! Well, moral purity came up for a vote and we were outvoted by the very same people who want me to rev up some oh-so convenient caring.

Well, no go-backsies now that those Old Rules would be useful again. You liberals made the New Rules, and by doing so you deprived yourselves of being able to leverage human frailty to weaponize our morality and score a victory based on collateral antics where you can’t win on substance.

Gosh, if you had held Cohiba Clinton and Tanqueray Teddy to a standard you might have had a shot. But you didn’t. And your ridiculous expectation that we’re going to all channel John Lithgow in Footloose is really pretty funny.

My favorite part is when you libs start with the Jesusplaining to me. I have to say, the best social media is the social media where I’m bombarded with demands that I conform to their version of Christianity where just a few tweets before they were explaining how we’re stupid about having our “invisible sky friend.” I gotta break it to ya – there are no series of theological contortions that result in us having to allow the election of a monster like Hillary. But hey, you keep trying. Eventually, if you nag us enough, we’ll totally take your advice about how to live our religious values.

Oh, since Christianity is so important to you, now do abortion. Just kidding!

Oh, and this goes for all the other silliness you’ve tried to use to undo the election. Is Trump’s company making money because he’s president? No, but then you didn’t care about the Clinton Foundation for Shaking Down People and Enriching Her Harpiness. Was Trump obstructing “justice” by firing James Comey and doing other stuff presidents get to do. No, but phone and pen, dudes. Phone and pen.

I guess this means we don’t meet your exacting moral standards anymore. Oh wait, we already failed that test – all of us have the blood of children on our hands because a school got shot up by some creep who wasn’t us that Democrat-led government agencies knew about and failed to stop.

Well, since we’re already the worst people ever, I guess we have nothing to lose by disappointing you by not allowing your fake concern for our souls to cause us to dance for your amusement.

Oh well. You must be really bummed. We do care about that, though. We love it.