The GOP Establishment Wants To Burn Down The Village To Save It...For Itself

Kurt Schlichter
|
Posted: Nov 13, 2017 12:01 AM
Share   Tweet
The opinions expressed by columnists are their own and do not necessarily represent the views of Townhall.com. 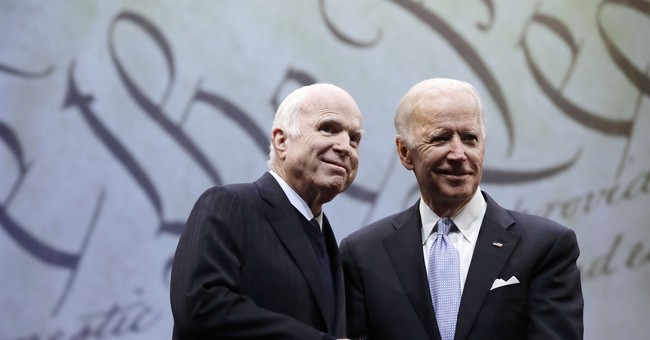 We keep hearing about how angry Trump voters are destroying the Republican Party, but last week’s Schumer-show demonstrated that the people running it would rather run it into the ground than give up their grip on power. The Smart Set managed to get slaughtered on election night – let’s not sugarcoat it, we got creamed. And the dim bulbs in Congress seem determined to somehow turn tax cuts into something Republican voters hate. The GOPe makes everything worse, like pumpkin spice.

Oh, and then there’s Roy Freaking Moore, whose creepitude led to the inevitable lecture about conservative principles, which apparently now include accepting every accusation pushed by our media enemies at face value. We know the guy is guilty of being like Jerry Seinfeld, and he may be worse and actually criminal. If he is, Moore needs to drop and the Alabama legislature needs to redo the rules to get a viable Republican into the race. But we don’t know, and the voters have a right to wonder why the GOPe was so eager to embrace a shaky claim pushed by a media we have seen lie and lie again about Republicans to help their liberal masters. All this makes it hard to come to any conclusion but that the GOP establishment thinks that the only way to defeat the virus of conservatism is to set fire to the party and hope that a few elections from now their Boehner-based, crony trough-feeding paradigm will rise again from the ashes like a K Street phoenix. It’s as if they want to get wiped out in 2018, and that’s the one objective they actually seem capable of achieving.

Gillespie’s loss was no shock – Virginia is a blue state no matter what the hope-springs-eternal crowd keeps saying. What was a shock is that the GOP failed to anticipate the down ticket Democrat turn-out tsunami. A Frisco zillionaire targeted marginal GOP districts, pumped in money and support and caught the GOP napping. A bunch of Republican delegates lost their seats, and not by that much – but by enough. Yet, none of the GOP brain trust saw this coming, and the enemy stole a march on us. Who is getting fired for this screw-up? If the answer is “Nobody,” we might as well pack it in next year.

It’s never good to lose, but losing will teach you more important lessons than winning. We now know that not only are Dems motivated, but they’ll be playing – with money and data support – in every marginal race. We have a year to prepare – are we doing that? What’s our strategy? Who the hell is responsible for coordinating 2018 anyway?

Is the GOPe planning on throwing the mid-term election to teach us uppity rubes a lesson?

Crazy? Would you put it past them? According to some of the fanatic Never Trumpers – who overlap with much of the GOPe/Conservative Inc. crew – we have some sort of moral obligation to lose as penance for not adhering to their measured, sensible guidance. Make no mistake – some of them see a defeat in 2018 as the first step back to their former glory. Think of all the cruise cabins they can sell in 2019 to folks eager to hear from superstars like Vin Weber and Eric Cantor about the great stuff the GOP will do when it controls the House again!

One obvious answer to the 2018 problem, assuming the GOPe even feels that the fact we are on track to lose our House and maybe Senate majorities is a problem, is for our legislators to do the things they promised to do and thereby make us not hate them so much. But the big problem is that in election after election they promised us what they would do if given the chance, and then, when we gave them the chance, they revealed that they didn’t actually want to do what they promised. They are discovering that blatantly lying to your base’s collective face is a risky strategic choice.

The GOP congressjerks couldn’t manage to undo Obamacare, despite their unequivocal promises, and now they seem intent on passing some sort of tax reform that is worse than not passing any sort of tax reform. What is this insane “taxes on a postcard” fixation? What we care about is paying less – I want a fifty page return if it saves me money. You take away deductions and our tax bills go up – and this nonsense about lowering rates is not going to undo the damage to the kind of people who usually … wait for it… vote Republican. But hey, the corporate rate will drop. Let’s all chip in for that. I know I’m glad to lose key deductions so the big donors can keep more cash.

Now, we could always lower everyone’s rates, and “pay for it” by…brace yourself…cutting spending. Except apparently cutting the budget is off the table. Leave it to the GOPe to decide that the winning Republican message for 2018 is “Tax and Spend.”

But hey, who says Congress can’t deliver? They’ve already delivered a year of investigations into the Trump/Putin/Chet the Unicorn collusion conspiracy. I know investigating our president in line with a liberal election defeat excuse narrative was my second biggest GOP priority following the humiliation of Felonia von Pantsuit and her supporters in the conservative cruise industry.

My first priority, and yours, was always to give amnesty and citizenship to millions of illegal aliens, and the GOP caucus is chomping at the bit to do that. Apparently Dreamers’ dreams of taking advantage of violating our laws and eventually become loyal Democrat voters are much more important than our own conservative voters’ dreams of their mandatory crummy health insurance rates not doubling.

And then there is Roy Moore, an outsider who I would prefer was not the nominee but I am not an Alabamian and I don’t get a say. I don’t know whether he did something 40 years ago, nor do you, but was it a smart move by the GOPe to immediately jump on-board the tumbrel taking him to the guillotine and give up on a Senate seat based upon a mere accusation? We know the case against him – he may well have done it, and there may be more shoes to drop – but why might GOP voters view this ultra-convenient revelation with suspicion? Here are some reasons:

I don’t know if Moore is guilty – if he is, the hell with him and let’s replace him on the ballot a la Robert Torricelli – but I know that the facts around this claim should make any reasonable person want to know more before they judge. Except not among the GOPe. In 2017’s least surprising development, John McCain demanded Moore drop out simply because he was accused. Yet when the New York Times accused McCain – he says falsely – of an affair, well, the Blue Falcon didn’t drop out of anything. And Mitt Romney, who always reminds me of a talking weasel wearing a $5,000 suit, had to pipe up and do the same. This was the same Mitt who Harry Reid lied about regarding his taxes so effectively. You’d think they’d both be sensitive to the potential for left wing smears, but no. We have two Republicans who were both falsely accused demanding that we give up a Senate seat because of an accusation the accused says is false – an accusation made on the pages of one of our greatest enemies no less. Does that seem legit?

So what are GOP voters supposed to think when they note how these paragons of virtue signaling have not been demanding the resignation of Democrat Senator Bob Menendez, who is in the midst of a federal corruption trial – a case where there are hints their pal The Distinguished Gentleman from New Jersey cavorted with underage hookers? And the Adults In The Room wonder why their voters have nothing but contempt for them.

As for Moore, it is properly the people of Alabama who will pass judgment. My guess is the voters of Alabama will believe Moore and choose him over the guy who wants to kill babies. I suspect that part of the reason will be to tell the GOPe that Alabamians will decide for themselves who represents them.

What a mess. The Republican Party seems to have no interest in addressing its electile dysfunction. The Democrats are preparing for battle; the Professional Republicans are sulking because their voters won’t obey. They seem not just unable but unwilling to pass the agenda they promised the base. And whenever there’s a narrative damaging to the party to be hopped on, despite reasonable grounds for skepticism, hop on they do. If the GOP establishment wanted to lose, what would it do differently?