Kurt Schlichter
|
Posted: Jul 27, 2017 12:01 AM
Share   Tweet
The opinions expressed by columnists are their own and do not necessarily represent the views of Townhall.com. 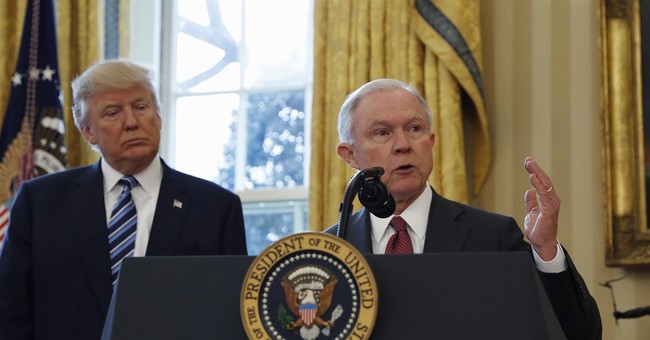 President Trump has done remarkably well so far, considering the hatred, contempt, and subversion he faces from members of his own party – much less the garbage he endures from the astonishingly inept and newly Russophobic Democrats. These nimrods’ bright idea for appealing to the deplorable people we call “normal Americans” is to take the New Deal and replace the adjective with “Better.” It has yet to occur to them to try not calling us “Jesus-loving gun freak racists who aren’t afraid enough of the weather and don’t believe women can have penises too.”

But it’s bad strategy to rely upon the lameness of your opposition. Instead, the president should be focused on launching a disciplined and overwhelming attack against the establishment to force his agenda through. But he’s not doing that. He’s messing up by going off on emotional tangents, and it will catch up with him.

I’ve taken a lot of whiny grief for defending the president, and I even got booted off CNN by a fussy Don Lemon when I refused to diss him over something dumb. I’ve supported him since he was nominated because he’s not a giant sack of leftist corruption and malice like Felonia von Pantsuit. It’s cost me the acquaintance of some acquaintances, but I’ll live. I usually avoid criticizing him because there are plenty of folks eager to do that. Fort Benning taught me that you win by beating the enemy, not your own side, and I have zero intention of fretting because Trump’s personality musses the feathers of conservatism’s Margret Dumont contingent.

But sometimes you need to lay down some real talk, and this comes from someone who supports the president’s efforts to defeat the enemies of normal Americans. So let me say it clearly.

Stop this nonsense about Jeff Sessions.

Have some discipline and focus. The day you decided to start pummeling Sessions was supposed to be about health care. The fact that our cunning, turtlesque majority leader managed to drag the first vote over the finish line notwithstanding, all you did was annoy your allies. When pretty much every Twitter pundit and senator and Rush and Hewitt and Tucker and Breitbart and a bunch of other alt-righties are all on the same sheet of music, that’s an indicator that you’re stepping all over your Schumer.

And Sessions is your friend – you can’t diss a friend, or you won’t have any friends left. And you need friends, because the enemy is coming.

Yeah, I get it that Sessions is a disappointment. The civil forfeiture stuff is stupid and his focus on pot-puffing stoners is almost as boring as the pot-puffing stoners themselves. He hasn’t picked the low-hanging fruit of Democrat duplicity. His ridiculous nod to the establishment by pretending this Russian idiocy wasn’t just a soft coup by deep state dorks and recusing himself was simply a sign that he’s not fully woke to the reality of this struggle. This isn’t a collegial, gentlemanly disagreement – homie should have gotten a clue when he was nominated and all his Distinguished Colleagues and Dear Friends across the aisle started calling him a klansman. This is a struggle to the death, and he should have told those braying morons demanding recusal to take their collusion and stuff it up their Harry Reids.

Okay, so Sessions is weak and a sucker, and that weakness and suckerness led to the unleashing of that Bob “Mr. Integrity™” Mueller and his team of foam-mouthed Hillary donors. The real threat is clear – Mueller needs to be neutered even beyond what a post-Vietnam life sniffing the seats of power has done to him.

And that neutering imagery leads us to a helpful analogy to the president’s current short-sighted failure to marshal his considerable power and use it decisively instead of squandering it. It’s the hit TV show Game of Thrones, the entertainingly bloody-and-breasty elf opera that has the distinction of showcasing almost as many manhood-challenged personalities as a Weekly Standard cruise.

Here’s the problem. The president has some huge challenges. He has limited combat power – yeah, he has a lot, and while it is still superior to his enemies, it is not unlimited. There’s a basic military rule of thumb that you break at your own peril. You do not split a superior force.

When you split a superior force, the enemy can then move to defeat you piecemeal. A superior force nearly guarantees a win. Take the guaranteed win. Grind out the victories. Don’t split your army.

They did in a recent Game of Thrones episode. The hot girl with the dragons met with the sort-of-hot woman with the three hard-six daughters, the bi-curious pirate chick, the sassy old lady who used to be Emma Peel, and the differently-abled person of shortness, and they came up with a war plan. It was a terrible war plan. They split their vastly superior force in two instead on focusing on the castle with the hot woman who was getting it on with her brother before she became a big enough star not to have to do nudity.

Terrible plan. Naturally, the enemy destroyed their fleet because they split their forces and ditched their dragon air cover like morons. I expect the producers thought it was super progressive to have the generals be all either women-identifying women or dwarves, but then they got thoroughly beaten by a cis-vertical phallo-person of pallor.

I’m not sure that’s the girl/midgetpower message they meant to convey, but whatev. The point is that when you lose focus and try to fight every battle, you risk losing every battle. The Sessions fight wasn’t strategically necessary – hell, “winning” would mean someone even worse because there’s no way the Senate will confirm anyone as AG that Trump actually wants.

Focus. Discipline. No one enemy can compete with the president, but a bunch of enemies can. Using the superior force at hand in a cunning, targeted way can bring back the winning. But uncoordinated, quixotic, emotion-driven lashing out? No, that’s what the Democrats and the Fredocons want from the president – mostly because they know from their own bitter experience how it leads to losing.