Kurt Schlichter
|
Posted: Oct 17, 2016 12:01 AM
Share   Tweet
The opinions expressed by columnists are their own and do not necessarily represent the views of Townhall.com. 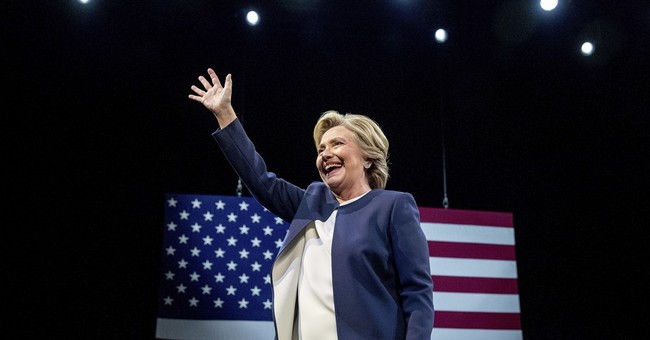 When the United States has been headed toward an existential crisis, as many believe it is today, the Lord has always sent Americans the right leader to meet the challenge.

In the dark days of the Revolution, George Washington.

In the bloody turmoil of the Civil War, Abraham Lincoln.

In the midst of the growing, bitter divisions of today…

She’s so, so terrible. Her greed and malignant hatred of normal Americans are exponentially more dangerous when combined with her overarching arrogance and third rate mind. Aggressive, bitter, and dumb, she’s almost certain to be our next president after an election that millions of citizens expect to be rigged – either in the sense that the supposedly disinterested, objective elements of society (the deep state and the media) are active partisans in her favor, or (even worse) because her victory will be the result of active voter fraud. America is a tinderbox, angry and ready to lash out, but the only answer the establishment seems to have is to shout down the plebes even more vociferously – “You’re stupid and racist and sexist and deplorable and irredeemable and how dare you object to your mistreatment! Now shut up and let us get back to looting the country!”

But there is another way though. It’s called leadership.

Imagine Hillary Clinton putting her hand down as John Roberts finishes swearing her in and walking to the podium, Barack Obama’s blanket pardon for any crimes regarding her email and the Clinton Foundation in the pocket of her pantsuit. The aftermath of the election was already bitter before. Now the anger is white hot. It has occurred to her that there is a small but not negligible chance this could be America’s last peaceful transition of government, and somewhere deep inside her – past the weird psychodramas starring her father and husband that drive her to avenge herself upon normal Americans, beyond the greed for cash she unconsciously believes will fill her empty soul – something noble stirs.

Against all odds, Hillary Clinton has chosen to rise to the occasion.

My fellow Americans, I take office with our Union divided. This is not a time for me to put my pride first, so I will not mince words – perhaps a half of our population considers my inauguration illegitimate. I cannot say that the other half would not have had similar sentiments if my opponent in that bitter and, yes, shameful campaign had prevailed, nor can I pretend that my own deplorable comments about his supporters did not help stoke the fires of anger.

But now I must be the president of all Americans, not simply those who agree with me. Respect is due the office of the President, but I must earn respect for myself as an individual. Millions of Americans are afraid that I will use the power of the presidency to enrich myself and those around me, that I will take away their rights and suppress political opposition. I grieve that they sincerely believe these things, but it is not for a leader to dismiss the concerns of the people, or to try and argue that those concerns are misplaced. My word that I will never do those things is insufficient; it is incumbent upon me to show them that I intend to govern honestly and fairly through my actions.

You see beside me on this stage, in places of honor, Speaker Ryan, Senator McConnell, and Supreme Court Justice Clarence Thomas. We have disagreed in the past and will in the future, but I asked them here specifically to demonstrate the fundamental unity beneath our day-to-day political disagreements. I also asked my opponent Donald Trump to be here, and I am sorry he declined. I will continue to reach out to him as a voice for millions of Americans whose voices must be heard as loudly and clearly as the voices of others.

Some of my allies are disappointed that I am reaching out to opponents. They counsel that we should use this opportunity to force through policies that I truly believe are best for our country. But this is not the time for rule by raw power, but for persuasion and compromise. And those are possible only in an atmosphere of trust. And I must earn that trust. To do so, I must show my sincerity.

The Second Amendment is a great concerns to millions of Americans who opposed my election. To address those concerns, I will not pursue any new gun control measures for at least two years. Make no mistake, I think we should, but in this poisoned environment doing so would only spark more distrust and disunity. So I will forgo doing so.

Many Americans have strong views that justice was not done regarding various investigations and controversies involving myself and organizations like the IRS. President Obama’s pardons have put those specific issues behind us, but not the underlying distrust that our government is nonpartisan and neutral. I will therefore work with Democrats and Republicans on legislation to enhance transparency and ensure that our federal government can never be used as a weapon against the citizenry.

Promises are easy to make. Actions, on the other hand, are hard. It is now my privilege to nominate a replacement for Justice Antonin Scalia. For decades, my party has sought to win a liberal majority on the Supreme Court. This seat could do that, and so there could be no clearer demonstration of my commitment to unity than to sacrifice that opportunity. For that reason, I will nominate Senator Orrin Hatch, a respected moderate Republican of unquestioned integrity, to take Justice Scalia’s seat. (Idea Hat Tip: Robert C. O’Brien) Senator Hatch has agreed to serve two years and retire. I trust that he will take a reasoned, moderate approach in his rulings. I will not be able to implement the changes I want immediately, but millions of Americans will see that they have nothing to fear. Reestablishing trust in our institutions is more important than any particular policy dispute.

Many in my party will be disappointed that I am pursuing the path of unity. They are angry too. They want change and they want it immediately. Some counsel ignoring the obstacles the law and the Constitution place in our path, either through executive orders or by simply ignoring the rules. But we cannot take that path and hope to remain a unified, democratic republic.

Triumphalism will only exacerbate the tensions that threaten to tear us apart. Lasting, accepted change can only come through bipartisan consensus, not force or parliamentary maneuvering. Our election victory did not negate forever the concerns and interests of those who were our opponents. We do not have to agree with them, but we must hear and respect them. And I am committed to doing that so that our country can begin to heal.

But could Hillary Clinton ever do this? Could she rise to greatness by sacrificing her own self-interest and desires?      My money is on “No,” because no one ever went broke betting on the greed and vindictiveness of a Clinton.

Instead of choosing to unify, she will choose to divide. Instead of healing, she will tear new wounds. She will use her office and the whole government as an engine to enrich herself and her cronies, and as a weapon to punish those who oppose her while giving a free pass to those who submit. In doing so, many fear she may well spark actual conflict, that she is more likely to be James Buchanan than Abraham Lincoln. But my book has not yet come true, and there is still time to choose to be wise and good instead of foolish and evil.