Kurt Schlichter
|
Posted: Aug 04, 2016 12:01 AM
Share   Tweet
The opinions expressed by columnists are their own and do not necessarily represent the views of Townhall.com. 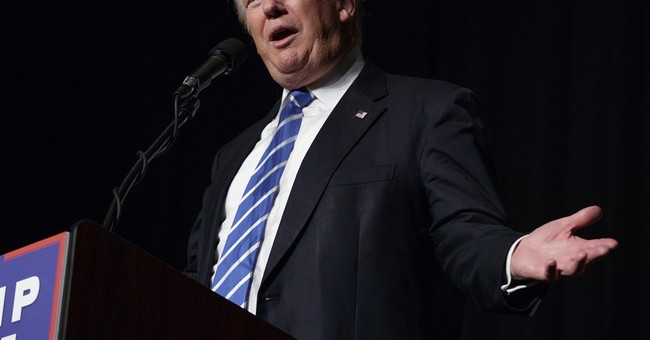 At least there is one good thing that will come out of this miserable 2016 election cycle, and that's the death of the fake outrage gambit deployed over and over again against GOP candidates by Democrats and their mainstream media gimp platoon. Where Mitt Romney was bound in knots over binders full of women, Donald Trump blissfully plows ahead toward Felonia Milhous von Pantsuit’s final humiliation in November, immune to the weaselly whining and wailing over shamelessly distorted statements that purport to show how he’s racist, sexist, Islamophobic, homophobic, climate phobic, and just plain mean.

You know, for a conservative there's not much to like about Trump, but there are two things to love. The first is that he's not Hillary Clinton. The second is that he just doesn't care what liberals say.

Hillary's hero, Saul Alinsky, recommended hoisting leftists’ opponents on their own petards by making them live up to their own moral standards. And that's what they do, trying to exploit our decency and morality to gain an edge. But we fooled them – we nominated a guy without decency or morality.

We see their hypocrisy, and we reject it. The party of Jane Fonda shouts “Babykiller!” at our returning vets, but for four days every four years it carts out some compliant loser general, one of the statistically outlying liberal vets, or someone who is vet-affiliated, and tries to pretend that their scuzzy party doesn't hold all of us who served in uniform in utter contempt. And when we push back on these people who volunteered to inject themselves into the political process to smear us, the Democrats pretend to react in horror: “How dare you attack a vet!”

Hey wait, I’m a vet. Can I get in on this sweet, sweet unaccountability too?

YOU ARE MORALLY REQUIRED TO SHEEPISHLY ACCEPT ANY UNPROVOKED ABUSE I HEAP UPON YOU WITHOUT RESPONSE OR COMPLAINT NO MATTER HOW UNFAIR OR TRANSPARENTLY FALSE BECAUSE I WAS IN A WAR!

Isn’t that how it works?

Oh wait, I don’t back a pinko libfascist who treats the Bill of Rights like Charmin, so my vethood is irrelevant. Please, by all means continue trashing the families of the guys who Hillary got killed in Benghazi and then lied to beside their caskets.

And do you think anyone outside our little circle of political junkies cares one iota that Trump said something nasty regarding the Hillary partisans who tried to leverage their gold star status to help her while assuming that Trump would never dare respond to their unfair attacks upon him? To the extent anyone was even paying attention to this nonsense, the latest in the never-ending series of “Hey, maybe we’ve got Trump this time!” gotchas, most people are probably wondering why the family was dissing Trump to help the woman who voted for the war where their son gave his life.

Criticize a Hillary-suckling general who was sending flirtatious emails while failing to achieve victory? Meh. No one believes Trump hates our troops. Hell, they’re asking themselves why the Obama/Clinton cartel can’t seem to beat the JV team.

No one outside our insular political world cares anymore about this transparent baloney. No one normal cares anymore if you gin up some bogus gaffe to help you lie about Republicans, and it's driving the Democrats nuts. They want us to be ashamed and disheartened. Instead, except for the usual suspects, it’s “Repudiate Trump? How about you libs repudiate this?”

The thing is, I'm not voting for Donald Trump to be my pal. I'm voting for him not to be Hillary. I’m going to vote for the imperfect vessel instead of the overflowing chamber pot.

I don't care if Trump's a bad person because I know that Hillary Clinton is a worse person, and that she would be unrestrained in power and pose a significant chance of plunging this country into violence. Compared to what that malignant Chavez wanna-be has in mind, electing the jerk seems the best way to avoid the kind of civil conflict that would give the fussy Trump foes something to really sob about.

And if you think that makes me “despicable” or lack “honor” or whatever else you want to offer to try to shame me into smoothing the way for Hillary’s coronation, well, I got something that you can repudiate.

The problem with Republicans is that for too long our elite cared what liberals said. “Oh no! They called us sexist! They called us racist!” It’s like at some level they wondered, “Could it be true? Could Mitt Romney actually be the moral equivalent of David Duke? I mean, Democrats certainly wouldn’t imply that with absolutely no basis in fact.” But not Trump and his voters. They see the lies and give precisely zero damns.

The libs called W Chimpy McBu$hiltlerburton and he took it. McCain felt morally obligated to nod along as they flayed him – hell, just this week he pivoted back to his classic Maverick Blue Falcon mode with his pompous pseudo-outrage at Trump for refusing to bend over, thank the libs, and ask, “May I have another?”

Even Romney refused to go bareknuckle with that lying sack of president of ours. So it’s kind of refreshing when Trump wears the lies and faux outrage of his enemies as proudly as a Latin American generalissimo wears his medals.

Their scam no longer works. The voters just don’t care. The voters have heard it all before. Hillary dropped $50 million in ads calling Trump the antichrist and America yawned. So she says the Republican is every –ist and –phobic there is? What else is new? If you’re always saying that it’s apocalypse now, when the apocalypse really comes, how will you know?

And since the faux outrage is all they have, now that that ploy has flopped they are in trouble. The polls are bouncing around, but they’ll bounce back up. Trump and Hillary are effectively tied despite Trump having no ad presence and no organization. What’s most important, it turns out, is that he has no apologies.

The voters are done with this hypocritical crap. We’re not voting for Trump to be our buddy. We’re voting for him to deny insider elitist libfascist Hillary the presidency until a conservative can come along who has the ability to connect with normal voters and the stones to fight. We've seen their lies and we just don't care anymore. Our next candidate better understand that the game has changed and that we’re playing by the Dems’ rules now. If he or she does, then maybe this crummy year won’t be a total loss.