Kurt Schlichter
|
Posted: May 16, 2016 12:01 AM
Share   Tweet
The opinions expressed by columnists are their own and do not necessarily represent the views of Townhall.com. 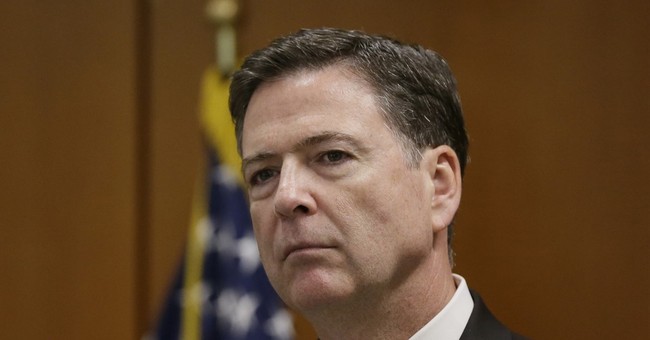 FBI Director James Comey knew he had to make a decision that would change his life, and maybe the history of his country, as he surveyed the piles of papers spread out in his office. The Deputy Director in charge of the investigation of Hillary Clinton – a criminal investigation, not some benign “security review” as the Clintonistas had tried to spin it – sat quietly, letting his boss think. The evidence was overwhelming. Hillary Clinton was clearly guilty of multiple felonies, and the Obama Department of Justice was not going to prosecute her. Now, it fell to Director Comey to decide what he would do about it.

James Comey was a veteran prosecutor and former Deputy Attorney General who convicted hundreds of criminals during his career before coming to direct the troubled Federal Bureau of Investigations. Until now, his integrity always came first, and he served faithfully regardless of the party in power, always careful to put aside any personal political agenda, though he'd seen more than enough people who didn't.

“There's no question, sir. None at all. She’s guilty.” said the Deputy Director, telling Comey nothing he did not know. He had sat in the secure classified information facility deep in the bowels of the Department of Justice when his agents had made their two-hour presentation to the stone-faced prosecutors. Clinton had grossly mishandled classified documents in violation of 18 United States Code Sections 793 and 1924. Some of the information Clinton had on the bathroom server was so sensitive that his agents needed upgraded clearances to see it, and it could only be discussed behind reinforced concrete walls in a room scanned twice a day for bugs. Clinton, because she did not want the accountability that came with using official email, had given industrious hackers and foreign governments carte blanche to pillage through some of America's most sensitive secrets. Though her loyal acolytes tried to spin it as innocuous, anyone who ever held a security clearance would go pale upon hearing what she had done.

Then there was the compelling evidence of the former Secretary of State’s quid pro quo influence peddling – favorable Department decisions and contracts linked to cash for contributions to the Clinton Foundation, which was essentially just a slush fund that subsidized the ex-president and his wife’s lavish lifestyle. And, of course, there was obstruction of justice – Clinton’s brazen attempted destruction of over 30,000 emails. She might as well have wiped them with a cloth because the skilled FBI technicians were able to recover most of them – and what they found was damning.

Well, it would be damning for anyone else. Even at that moment, there were ongoing prosecutions brought with a fraction of the evidence his dozens of agents had assembled against Clinton. At that moment, people were serving sentences for doing less with less sensitive material. And if some company under investigation had destroyed thousands of emails it had the legal obligation to maintain, the CEO would already be sweating out shower time in a federal prison.

But that briefing was weeks ago and since then there had been nothing from Justice – not a word. In any other case, the grand jury would have been empaneled and the indictments already issued. Here, no one had even pulled Clinton’s security clearance. And now the rumor was that Loretta Lynch had decided not prosecute, and that after her election Barack Obama would pardon the President-elect “for the good of the country.”

It was clear that the law was, once again, not going to apply to Hillary Clinton. Now Director Comey had to decide what he was going to do about it. Would he go along quietly with something every fiber of his being told him was a great wrong, or would he make a public stand and keep his integrity?

Comey tried to stay out of politics, but that didn't mean he was unaware of them. If he was to go public after resigning in protest not even the mainstream media that was backing Clinton could mitigate the damage. His public act of conscience could very well hand office to Donald Trump, a man someone with integrity like Director Comey could only loathe. The justice system shouldn't determine an election, but then justice had to be blind, didn't it? Was there to be one rule of law for all Americans, or a special rule of law for the important and connected?

Comey could go along. He knew that's what President Obama wanted. Oh, the President was far too clever to pick up the phone and tell his minions at the DoJ not to indict. He didn't have to. They knew, and they would do it without his fingerprints on it. And if Comey played along he'd be richly rewarded. Unctuous functionaries had hinted as much. “You have a great future, Director. I’m sure once you leave public service, you’ll have many, many, many opportunities.”

But if he stood up for the law, they would destroy him. Comey had no illusions about the price to be paid for crossing the Clinton machine. Ken Starr, another man of integrity, had done it 20 years ago and to this day remains exiled from elite society. The Clintons and their media minions would mercilessly slander Comey and his family, tearing down his career of public service and integrity. He would be a pariah.

There was something the Mexican drug cartels say when they try to corrupt government officials, Comey reflected. Plata o plumo. Silver or lead.

“What will you do, sir?” asked the Deputy Director. Comey gestured to the door.

Now alone, Comey stared out his window, and his eyes settled on the tip of the Washington Monument piercing the skyline of the city named in the first president’s honor. There was no question what George Washington would do, the Director mused. He sighed, stepped back toward his desk and picked up the phone.