Bernie Sanders, Lover of Genocidal Tyrants, Is Anything But Cute 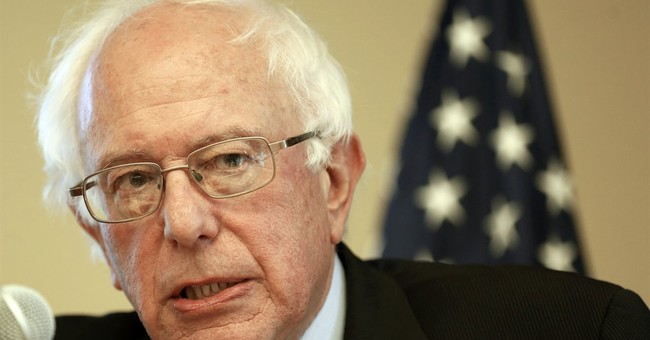 In a reality show election starring Hillary Clinton, it takes real effort to be the most appalling, disgusting, and morally bankrupt character in the cast. Enter stage left Bernie Sanders, the “democratic” socialist. He’s not some cute curmudgeon who fights the little guy. He’s a committed adherent to an ideology that starved, tortured, and murdered north of 100 million people over the last century.

Even for the Democrat Party, which founded and nurtured the KKK, embracing a sycophant of psychotics is a mortifying new low.

Sanders – I refuse to anthropomorphize this lover of mass murderers by using the cute diminutive “Bernie” – wants you to believe that “socialism” is just another word for Sweden. That’s a lie. Let’s clear the air – the word “socialism” means something, and it’s not just “really liberal.” A socialist is one who places the state above the individual, who rejects the notion that human beings have any natural rights and, instead, believes that “rights” are mere privileges to be granted or withdrawn at a dictator’s whim.

It’s no surprise that Sanders abhors the First Amendment so much that he makes a huge point of demanding that our free speech be circumscribed and limited. The Citizens United decision barred the government from banning speech critical of another Democrat, Hillary Clinton, and the likes of Sanders cannot abide people speaking truth to power. The heart of socialism is government control – of your property and of your life, among other things. Socialist ideology is not amenable to tolerating opposition, and lo and behold, none of the tyrannies that Sanders and his pack of murder-apologists fetishize ever do.

Sanders honeymooned in the Union of Soviet Socialist Republics, a barbaric construct that was less a nation than a collection of gulags and mass graves masquerading as a country. To lend support to that Evil Empire – and that is exactly what it was before Reagan broke its accursed neck – is a moral failure of epic proportions. Not to mention that, at the time Sanders was sucking up to it, it was America’s sworn enemy. I know – I sat on the free side of the Iron Curtain in uniform prepared to die in place holding its hordes back in the event they decided to cross into West Germany.

That dirtbag Sanders, by the way, was a secular conscientious objector during Vietnam. He objected both to fighting for his country and to fighting against America’s – and humanity’s – socialist enemies. So let’s throw cowardice into the mix too. In other words, he’s the perfect Democrat.

And the Pol Pot thickens. How many tears did the leftists shed when the side Sanders wanted to win, that he agitated for, that he actively supported, actually won in Southeast Asia following his party’s betrayal of its allies and the breaking of its solemn promise of continued support? Zero. Once the socialists had been allowed to triumph, Sanders and the rest of his merry band of butcher-enablers turned their attention elsewhere, leaving their friends to add another couple million to the Left’s tally of slaughtered innocents.

Sanders likes Castro too. What’s enslaving an entire island if it helps his immoral cause? Oh, and he loves Venezuela as well – similarly, if Sanders gets his way here, there won’t be a chicken in any pot, nor any toilet paper on the roll. How appropriate for history’s crappiest ideology.

And let’s not forget the fraternal twin brother socialism never talks about, the one Sanders and his socialist pals want to deny but who best encapsulates what they are about – the Nazis. Yes, we all know how socialists spaz out when you point out that the National Socialist Worker’s Party was a socialist party, but facts matter. Stormtrooper shirt brown is just another color in the leftist rainbow.

There are some troubling parallels that Sanders and his crew of burnt out Woodstockians and nitwit college teens want to deny. Hitler liked to control free speech. We’ve seen how Sanders agrees. Hitler left big corporations nominally in private hands but retained unambiguous and unquestioned control over them; Sanders would tell the big corporations what to do directly. Hitler liked to arrange big rallies of like-minded, slack-jawed idiots; so does Sanders. Hitler insinuated the state in every private decision; that’s Sanders’s dream. Oh, and Hitler hated Jews who resisted their extermination; so do Sanders and his anti-Israeli minions.

To be fair, there are differences. Hitler invaded his neighbors, while Sanders supports letting our neighbors invade us. Hitler’s legions wore Hugo Boss-designed clothes; Sanders’s legions wear ironic t-shirts or whatever else their moms lay out for them.

The utter disgrace is that Democrats not only tolerate this wretched piece of walking, talking excrement, but that they invited him on stage as a legitimate candidate for the nomination of their party to be president. Hillary Clinton, if she was a decent American, should have spit in his bitter, howling face.

Maybe I’m biased, having spent years of my life helping defend against, and clean up the bloody ruins of, the nightmare of socialism. I am not talking about the dreamy, gooey, soft-focus, non-existent species of socialism embraced by brainwashed sophomores and their TAs, but the real socialism practiced in the real world. The one that enslaves people, that poisons their cultures, that murders them for disobedience or sometimes, simply for mere convenience.

The thing is, Sanders himself is just a stooge. He’ll excuse the blood on his heroes’ hands, but he doesn’t have the will to spill it himself. He’s a milquetoast Menshevik, the foolish, false face of the revolution. And if, heaven forbid, he ever took power, the Bolsheviks would put him up against a wall the minute they no longer found him useful.

But of course, by that time you and I will already be dead. Because the only way the United States of America and its Constitution will ever be overthrown in favor of the socialist dictatorship Sanders and his pals dream of is over heaping piles of spent brass and our dead bodies.