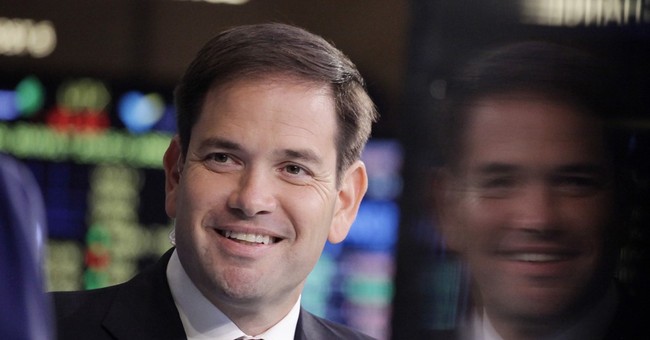 I want to support Marco Rubio, but today I can’t. He may not have burned all his bridges to us conservatives, but he charred the hell out of them with his flirtation with the Gang of Eight and his disingenuous embrace of amnesty. Right now, a huge and decisive bloc of conservatives will not vote for him. So, can he ever win us back?

Maybe. That depends on him. Entirely on him.

Rubio has plenty going for him. For one thing, he can talk – Rubio can put a sentence together without sounding like he’s in a cage match with the English language. He’s handled the baiting by that oaf Trump with aplomb and good humor – you can tell he’s been effective because The Donald has gone off to bully other targets.

Rubio comes off as personally likeable, though a bit goody-goody, like he’ll cry if he gets an A- on his history quiz. Sure he’s young, but everyone looks young compared to the Democrats’ commie cryptkeeper contingent.

Substantively, especially on foreign policy, Rubio is really sharp. He sounds like a president. You know the Democrats fear him because their media minions tried to kneecap him early on – “Psst, did you hear? Rubio bought a boat!”

Oh, and his wife is hot.

Critically, in a time where branding is crucial, he’s not an orange-hued, bourbon-swilling Anglo who comes off like an unfun version of Rodney Dangerfield’s Al Cervik from Caddyshack. Next year, the Republican candidate is going up against some version of a painfully white, doddering socialist, and it would be nice to have a contrast to whatever member of the cadaver caucus the libs settle on.

Let’s face it – the Cuban thing is good. But that’s not because of the bizarre notion that his being of Cuban descent is going to win over everyone with a remotely Latin surname – having married into a Cuban family, I know that being Cuban may well hurt him with some sub-sets of Hispanicdom. No, the Cuban thing is good because it demonstrates that being a Republican doesn’t mean having to come off like the guy who owned the local Buick dealership back in 1965. And it is part of a powerful and compelling back story. Aspiring American-by-choice immigrates, works hard, and his son runs for president. God bless America.

Funny how immigration went from being an asset to his only real liability. But it’s a huge liability that is going to sink his candidacy if he doesn’t unscrew what he screwed up.

Bottom Line: Marco, you can’t cavort with Chuck Schumer, push an amnesty bill, and be the Republican nominee without making amends to us conservatives for your utter, total, and comprehensive failure. You can’t rely on the Jeb! strategy of being the last guy standing, thinking conservatives will have no choice but to back you. Oh, they have a choice all right, and many will choose to burn it all down.

I would be supporting you today except for the amnesty thing. There are a lot of Republicans like me. Here’s how you win us back.

First, quit the denial. You supported amnesty … stop what you are about to say. You are about to say, “But it wasn’t amnesty,” and saying that is going to set me off like Carlo denying he set up Sonny set off Michael Corleone. It insults our intelligence.

You have to answer for your dissembling about what the Gang of Eight wanted to do. Here’s a pro tip: When you go on Univision, remember that a lot of us speak Spanish and are onto the “Right in English, left in Español” game. You were not straight with us. You treated us like we were stupid, and the second you start trying to explain how we really didn’t understand and blah blah blah we will tune you right back out again.

Say this: “I wanted to try and find a compromise to solve the illegal immigration problem. I was too trusting of Chuck Schumer and the Democrats – a mistake I won’t make again – and I let myself become a salesman for what was essentially amnesty. I was wrong.”

Now that you have cleared the air about the past, you can move on to the future, because right now the old Immigration Trustmeter is in the red. Say this: “Here’s where I stand. Illegal immigration is wrong. Illegal aliens should go home. Period. I will never support allowing any illegal alien who didn’t honorably serve in our military to become a U.S. citizen unless he goes home and reapplies to immigrate the right way – by respecting our laws. The first thing we must do is secure the border with Mexico with a Gulf to Pacific wall. Not a virtual wall. A wall wall, with enough guards to end the flow of illegal aliens.”

Choose a conservative venue with trusted, hardcore conservative figures to take your confession. Not some squishy publication, and not to spineless RINOs. You’ll have them nailed down regardless when Jeb! finally realizes that the dream is over and bails. You need to convince us, the conservatives, the Tea Partiers, the battlecons, Team Pitchfork N’ Torches, the guys who drove Cantor and Boehner out of the house. That’s the only way you might possibly receive our absolution.

Might possibly, because there are some of us you will never win back. That’s on you. Your torrid romance with the Gang of Eight and your weasally behavior therein demonstrates how easy it is to squander trust by abusing it. But some of us will give you a second chance if you demonstrate that you have learned from your grave mistake.

Make amends, then keep your word. Oh, and the ticket should be, in no particular order, you and Carly.