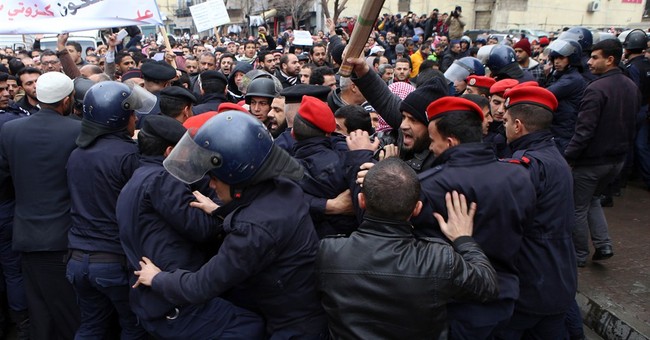 The only thing more elusive than an attractive liberal feminist is a conservative Christian mass murderer, but that doesn’t keep Team Progressive from pressing on with its never-ending snipe hunt to find one. The latest search for the left’s Great White Hopeless began last week when some jerk murdered three people in Chapel Hill.

You could almost hear the collectivists’ collective groan of disappointment when the creep turned out not to be a Rush-loving Dittohead but, instead, one of Rachael Maddow’s slobbering fanboys. Talk about wreaking the narrative – instead of lots of quotes from Jesus, this lonely, sexless loser instead garlanded his Facebook page with those doofy, pseudo-clever memes about atheism from the likes of Neil deGrasse Tyson that the militantly godless/friendless try to use as a signifier of their transcendent mental superiority. What this really signifies is that they will never know the loving touch of a living human being.

Yep, the narrative failed when the liberal smart set puffed itself all up and got ready to declaim how America hates Muslims and stuff, only to find that the killer probably sat next to them at last Thursday’s all-white “Run, Elizabeth, Run” conclave down at the community center in the classroom between the seminar on macramé and the talk by the self-help guy promising to make you the very best you that you can possibly be. You just know the killer was the guy who brought the gluten and animal-oppression-free cupcakes everyone took only one bite of.

There’s been a lot of talk about high horses lately and this poster child for militant liberal atheism, with all his bitter hatred and imagined specialness, knocked the liberal elite right out of the saddle. The elitists were ready to indict America for the crime of Islamophobia and discovered that they had to serve the warrant on themselves.

The rest of us were simply appalled by the cruel waste of human life this left-wing freak caused when he allegedly chose to murder innocent people because they dared believe something and he couldn’t tolerate full hearts when his was so pathetically empty. No, this is not an indictment of all atheists; it’s an indictment of bad ones. And it’s coming from a Christian who, on one of his deployments to protect Muslims, protected them from people purporting to share his faith. The overwhelming majority of atheists were as disgusted as the overwhelming number of those who contend they are Christian. And those few self-described Christians who celebrate the murder of innocents don’t have to answer to me, but answer they will.

Chris Kyle came in for some more hate from the hyperventilating progressives who used this man bites dog story to push the narrative of America as a land where Muslims must live in fear of any moment encountering … well, some liberal with a chip on his sloping shoulders. But of course that’s a lie. Chris Kyle – a man of God the Chapel Hill scumbag would despise, envy and fear – saved more Muslim lives with his rifle killing jihadi savages than all the hashtag warriors combined ever will.

The simple truth is that Muslims are safer here in America than anywhere on the planet – and though the truth will offend progressives, Muslims are exponentially safer here than in the countries that identify themselves as Muslim. That’s just a fact, and one millions of other American veterans like me know first-hand because we went to those countries and we protected innocent Muslims there. Some of us did not come home.

Real Americans have responded with compassion to this outrage by yet another liberal freak following in the cloven hoofsteps of such progressives as Lee Harvey Oswald and Christopher Dorner. But, after decades of progressive slander, real Americans utterly rejected the bogus claim that this hateful act somehow sprung from the black heart of AmeriKKKA. It’s a lie, and thanks to alternative and social media that can bypass dishonest mainstream media gatekeepers like Brian Williams, real Americans saw it and pushed back. “Muslim lives matter,” read the hashtag. Damn right – I know because me and millions of other American picked up rifles and enforced it.

If you want to take a lesson from what happened in Chapel Hill, then take the lesson that we need to teach liberal militant atheists not to murder. But if you want to try to slime us conservatives to promote your fascisty agenda, you best step back and step off. There’s a reason we conservatives never seem to turn out to be the bad guys. It’s because we are the good guys.