The Sword Is Mightier Than The Pen 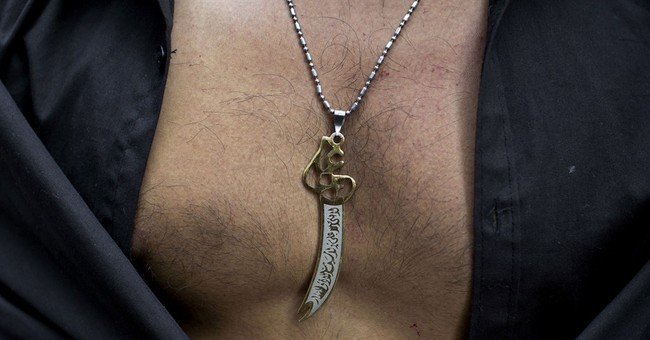 The world is being rocked by a rash of “workplace violence,” though what the Administration believes the Koran has against workplaces remains unclear. Those who eschew the willful blindness of the cowardly and foolish see clearly that the Islamofascist freaks are running up the body count across the globe. The question is what, if anything, are we going to do about it?

Vigils are nice. People get together, hold candles, talk about solidarity and hug, and thereby reinforce the view that Western civilization has lost the intestinal fortitude that kept the jihadi hordes from overrunning Europe during the Middle Ages and that has kept a lid on these fanatics ever since. It’s nice to pick up a pen – as we will see, writing, persuasion and mockery are all vital supporting efforts in the counter-offensive in what Senator Lindsey Graham accurately told Hugh Hewitt is “a religious war.” But it’s necessary to pick up a rifle.

The pen is not mightier than the sword, or more aptly, the M4 carbine, the 2000-pound JDAM bomb or the Hellfire missile. The way to win a war is to kill the enemy until he surrenders. That’s it. The Romans’ rules of engagement were simple: “Wipe them out.” Two thousand years later, Carthage still isn’t a threat, while a couple years after terrorists massacred four Americans, Benghazi still is.

All those people talking about “limited deployments” and “red lines” and “proportional use of force” – how’s their track record been so far? Iraq went from lost to won to lost again. They simply announced that we had won in Afghanistan, which was a big surprise to the Taliban. And today, you can’t even draw a cartoon in a major Western metropolis without worrying about some degenerate blowing your head off – to be followed by a gang of primarily leftist cultural kapos asking, “What do you expect would happen for saying things that offend people?”

The solution is victory. The West needs to choose to defeat them, not just put off the day when these sociopaths hoist their scuzzy little banners over our capitals. That means fighting, and fighting to win – not just fighting to ensure that the collapse of the next country happens on the next politician’s watch.

War is about killing, and we are not doing enough of it. This is not rocket science. You look at a map of Iraq and ISIS’s zone of influence and you see right where to put the infantry/armor divisions to close them off and wipe them out once and for all. But the West won’t do it. We want to pretend that a few sorties a day to pick off random gun trucks is a substitute for an overwhelming, ruthless attack to take ground and wipe out anyone we find on it who isn’t a friend or surrendering.

Nicking them at the margins is not enough, and our gutless, feckless unwillingness to take the fight to the enemy with our heavy firepower is no secret. They see our weakness. That just makes them stronger.

Hell, if we can’t man up and put our own boots back on the ground, there is a partial solution. As with most questions, our Constitution provides an answer. Maybe we should look to Article I, Section 8, and grant some letters of marque and reprisal. In the olden days, these fabulous documents allowed private ships the right to sail the high seas attacking their nation’s enemies. Maybe we should put a bounty on these ISIS creeps and let private enterprise go to town. Considering it takes a million bucks or more a year to keep a single U.S. soldier in the field over there, even at $100,000 a head – attached or otherwise – taxpayers would be getting a great deal.

Regardless of how we do it, killing vast numbers of jihadis and destroying everything around them is imperative. It not only decreases the raw numbers of fighters, but it dramatically decreases the number of people who want to help them, as doing so will rapidly become associated with getting killed.

The sword is the main effort, but it is not the only effort. The pen – the ideological offensive – is a key supporting effort that complements, but can never replace, the central role of massive, controlled violence.

There is our pen, an intellectual effort by the West to attack Islamofascism head-on. We need to stand up for our culture, not apologize for it. We need to mock the foolishness of jihadism and the delusions of its drooling, sexually inadequate adherents. We need to call it what it is – a savage, primitive, stupid perversion of Islam.

That leads to the second part of the pen/influencing effort, that of the Islamic world. While it is a lie to say that the terrorists have nothing to do with Islam, it is also untrue to say that all Islam supports the terrorists. All Muslims don’t believe in this jihadi idiocy. In fact, right now – as they have for years – decent, brave Muslims are fighting side by side with our troops against jihadi morons. To ignore that is not only a shameful betrayal of our allies but a foolish squandering of a valuable weapon against extremism.

And good Muslims are fighting back. We waited for years for reasonable, rational Muslim voices to make themselves heard, and it has happened. Egypt’s President al-Sisi – you know, the guy who screwed up President Obama’s plan to turn the most important country in the Middle East over to the Muslim Brotherhood – went in front of Islam’s most noted scholars and chewed them out. He called for a rethink and reexamination of Islam, pointing out that jihadi foolishness was turning the Muslim world into a pariah. That’s huge, but few know about it because of both the focus on the murders in Paris and the general cluelessness of our media.

So the pen remains a vital component of victory. But let’s not fool ourselves. We aren’t going to talk the jihadi punks who claim to love death out of their delusions. We need to treat them like Old Yeller – except when they get put out of our misery, no one’s going to cry.