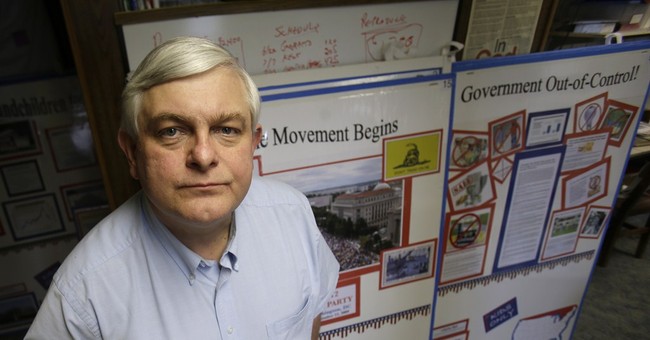 Some establishment types are shaking their heads as they warn conservatives that we must not politicize the Administration’s Benghazi bungling, its Obamacare shakedowns, its AP records grab or its IRS abuses.

The last couple weeks’ revelations of fresh and compelling examples of the kind of duplicity and petty tyranny we conservatives have been screaming about for five years have presented us with what military folks call a “seam.” A “seam” is the border where two different units meet, and it is generally the kind of weak point you want to drive your forces into in order to split your opponent’s front and rout him. These latest scandals have revealed a seam between two elements of the liberal coalition, the liberals who actually believe some of what they say and the cynical leftists who merely crave power.

But to do so, conservatives must ignore the voices of the fussy and the fainthearted and ruthlessly exploit it. We can and should – and must – politicize the hell out of these shameful imbroglios.

There’s nothing wrong with politicizing politics. In fact, it’s kind of difficult to imagine why politics shouldn’t be politicized – politics is, after all, by definition political. In fact, it’s only this week, after it became inconvenient, that the liberal establishment changed its collective mind and determined that politicization was once again a bad thing. It was a good thing when liberals were slobbering at the chance to use the massacre of innocents by a lunatic to deprive law-abiding citizens of their sacred fundamental right to keep and bear effective arms. Back then, politicizing misfortune was not only A-OK but a moral imperative.

This week, not so much.

The hypocrisy surrounding the concept of politicization illustrates the opportunity conservatives have had fall into their collective lap as a result of this tsunami of scandals. Today’s liberalism is a festival of hypocrisy, of purported values solemnly praised and heartily defended right up until the second it stops being in the interest of liberalism to do so. At that point, these sacred values get discarded like so many whiskey bottles in the Kennedy compound’s recycling bin.

Of course, no discussion of liberal hypocrisy could begin without a reference to Teddy Kennedy, who did his part in the War on Women by personally running up the casualty rate. Bill Clinton was another friend of women, at least until they complained about him and were insulated by his liberal guardians.

Liberal champions of minorities didn’t hesitate to make an icon of Robert Byrd, who was either a Grand Imperial Cyclops or an Exalted Kleagle in the Democrat-founded KKK. And the liberal champions of the innocent and the helpless won’t help you if you are too innocent or helpless – if you are, say, a fetus you are out of luck.

The current administration’s love of civil rights and liberties came to an end about the time the President removed his hand from the Bible in January 2009. Free speech was an awesome concept when liberals were using it against their opponents. But once liberals took power, free speech became an appalling obstacle to true progress. Freedom of religion stopped being important when some religious people abused that right by opposing liberal initiatives on religious grounds. And as for the Second Amendment, well, don’t let the text fool you into thinking it gives you any rights.

If it was to the Administration’s short term political advantage to quarter soldiers in private houses without the consent of the owner they would be showing the Third Amendment the door.

We now have an Administration that lied about what happened in Benghazi, and is now lying about its lies. We have a cabinet secretary shaking down healthcare companies for “donations” to a propaganda fund for Obamacare. We have the government grabbing up reporters’ cellphone records, and we have the IRS randomly selecting for persecution people and entities who just happen to oppose the regime’s goals.

For some liberals, this is just too much to swallow, and we should focus on splitting them out of the liberal coalition. This is the seam.

We spend so much time seeing and reading the ravings of the zombie liberals of the media and the blogs that we forget there is another group of liberals who are liberal because – for whatever misguided reason – they think liberalism is the right way to be. In other words, there are liberals who actually believe what liberalism used to purport to support – including civil rights, civil liberties and the rights of traditionally disadvantaged people.

It is interesting that from those ranks come some of the most dedicated and effective conservative activists – people who became conservative not because they changed their views but because they didn’t. Liberalism left them. They believe in individual rights and in equality before the law. They hate prejudice and bigotry in all their ugly forms. They embrace every individual’s value, and want to see every individual have a chance to live and to succeed.

They are people like Andrew Breitbart. Andrew was not born a conservative. He wasn’t raised a right-winger. He started out a liberal, but he actually took seriously what liberals said. His great sin – and why he was and is so hated by liberals – is that he refused to stop believing in those values when those values stopped being useful. His outrage was not that liberals were liberal; it was that establishment liberals were liars, that they struck poses as defenders of what was true and good and then abandoned them without a second thought if another pose better served their purpose.

This is the seam, the liberals who have a sense of right and wrong, who truly believe in the values the liberal establishment merely pays lip service too. You can see them tentatively raising their heads in response to the avalanche of scandals, noting that maybe the Administration could be a bit more forthcoming on Benghazi, that perhaps siccing government enforcers on political opponents is a bad thing to do.

They sense the truth, and they need time to get their head around it. Liberalism has left them too.

Now that the mainstream media has itself felt the clammy grasp of government oppression, for the first time since the inauguration the White House has reason to fear the headlines in the morning papers. The press senses blood in the water, and some elements of it seem to be stirring out of their lethargy and spinning up into a well-deserved feeding frenzy.

As conservatives, we should not overplay our hand. We should not babble about impeachment or oversell the revelations. We should let the media be the delivery system for the bad news – it’s a lot harder to shoot the messenger when the messenger is the undeniably liberal Washington Post.

But politicize it we must – in hearings, on talk shows, to reporters. We have found the seam. Our wedge is truth. And we need to drive it in with a sledgehammer.