Kristan Hawkins
|
Posted: Jun 04, 2022 12:01 AM
Share   Tweet
The opinions expressed by columnists are their own and do not necessarily represent the views of Townhall.com. 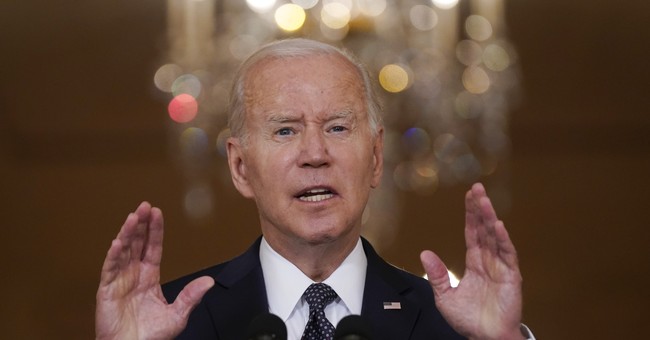 If you’ve logged into any social media recently, mainstream media and Democratic legislators may have had you thinking that Republican members of Congress singlehandedly held up the production of baby formula with malicious intent. Graphics reading, “How can you be pro-life and take away formula,” circulated newsfeeds widely, but what’s the full story? In part, it’s that being a baby in Biden’s America is bad news—and that Republican members of Congress aren’t giving President Biden a free pass.

Why would President Biden allow babies outside of the womb and low-income children at school go hungry? (We know babies IN the womb are not his priority.)

The U.S. House of Representatives recently took up a $28 million funding bill which would send funds to the Food and Drug Administration (FDA), and most of the GOP rejected it. The social media backlash from Democrats was shifted immediately accusing Republicans of refusing to feed babies.

Wondering why the GOP would take such a seemingly hard line? Multiple Republican legislators who opposed the bill spoke out against it as it was simply providing more tax-payer funds to the FDA without actually addressing the formula shortage or having any plan of action in place.

Basically, they said no to sending a massive check—signed by the American taxpayer—to the FDA functioning with zero accountability.

Rep. Andy Biggs (R-Ariz.) tweeted, “It is imperative to find solutions to address Biden’s baby formula crisis. But what my congressional colleagues have proposed does not address the core issues of this crisis. Throwing tens of millions of dollars at the FDA–an agency arguably responsible for facilitating this crisis—is not a viable solution. This legislation would make baby formula shortages worse for most Americans.”

The Biden Administration claims that addressing this shortfall is an urgent priority, but Biden’s FDA had nothing but months of inaction. Abbott’s Michigan plant, one of the largest manufacturers of baby formula in the United States, had a whistleblower complaint inOctober 2021 that sounded the alarm on safety violations and falsified records.

The commissioner of the FDA was questioned by Congress about the months of delay in addressing the concern, and the Associated Press reported:

“Several FDA staffers reviewed the complaint in late October when it was sent to a regional FDA office, but an interview didn’t take place until two months later, in part due to the whistleblower’s scheduling conflicts. Senior FDA officials eventually received the complaint via email, but not until February due to “an isolated failure in FDA’s mailroom, likely due to COVID-19 staffing issues,” according to the FDA testimony.”

This lame answer sounds a lot like the bureaucratic version of “The dog ate my homework.”

The Abbott plant was shut down in February, and panic understandably struck many parents across the nation when they saw bare formula shelves at the store. Why did it take outrage from parents before the Biden Administration reacted? And how is sending $28 million to the FDA without clear direction the solution? The fact of the matter is that the Biden Administration and its Democratic allies have done little to nothing to care for babies inside or outside of the womb.

Rep. Greg Murphy (R-N.C.) tweeted, “Let's be clear: the #BabyFormulaShortage is just the latest example of the Biden Administration’s systematic failure to lead. @HouseGOP called for action months ago, and as usual, this Administration is dazed and confused. American families are suffering as a result.”

The House bill passed by Democrats is not the solution to replenishing production. The Republican Conference noted the bill the GOP is being criticized for merely provided “millions in taxpayer dollars to the unelected bureaucrats at the FDA who for months ignored the impending crisis.”

While all this is going on, the FDA still has not responded to Students for Life of America's FOIA request related to things like FDA inspection of Chemical Abortion factory conditions, where pills that can cause women injury, infertility, and even death, are made.Where is the FDA's concern for women in America, as Chemical Abortion pills are now more than half of all abortion? When did they last look at THAT plant?

The FDA seems indifferent to what happens to women and babies, born and preborn, as a result of their actions, and certainly did not deserve a pay raise with taxpayer money.

The Biden Administration is now also pushing its agenda in schools to allow boys to be in girls’ locker rooms and restrooms in order to receive federal funding for breakfast, lunch, and snacks according to a new proposed rule.

The Federalist reported:  “Under this new demand, establishments that accept any federal food funding, including food stamps, must also allow males who claim to be female to access female private spaces, such as showers, bathrooms, and sleeping areas. Such organizations must also follow protocols such as requiring staff to use inaccurate pronouns to describe transgender people and allowing male staff to dress as women while on the job.”

While religious institutions can file for exemptions from this rule, there are unfortunately none available for government schools—putting these students smack in the middle of Biden’s war on Title IX and gender confusion on developing minds and bodies.

Make no mistake: Not one Republican member of Congress voted in favor of a plan for parents to frantically search for formula or for poor children to miss lunch at school. But can we say the same about those in the Biden Administration who could have acted to stop both? We need real solutions to fix the problems the Administration has created and put an end to using children -- born and pre-born -- as pawns in a political game with no winners.

Kristan Hawkins is president of Students for Life of America & Students for Life Action, with more than 1,300 groups on middle and high school, college and university, medical and law school campuses in all 50 states. Follow her @KristanHawkins or subscribe to her podcast, Explicitly Pro-Life.