Kristan Hawkins
|
Posted: Mar 06, 2018 10:12 AM
Share   Tweet
The opinions expressed by columnists are their own and do not necessarily represent the views of Townhall.com. 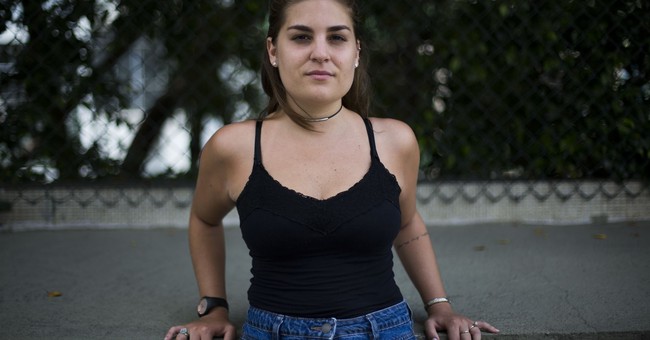 History seems prepared to repeat itself as undocumented, pregnant teenagers are caught in the web of abortion advocates looking for a new “right.” In October 2017, a pregnant, illegal immigrant teenager, with the help of the ACLU, sought an abortion in the United States. At the time, I argued that the case could lead to a “Roe v. Wade 2.0” or an international Jane Roe creating a “right” to abortion for all on U.S. soil, whether or not the individual was a citizen of the United States. This was not idle speculation or fundraising rhetoric.

Very quickly after a series of meetings in court, the teenager was taken for an abortion under circumstances that the Justice Department plans to investigate. Once the abortion was completed, the ACLU openly celebrated on Twitter, discussing their end game: “Make no mistake, the Trump administration's efforts to interfere in women's decisions won't stop with Jane Doe. We will not stop fighting until every woman has access to abortion care. #JusticeforJane.” That push for a new international Jane Roe continues as evidenced by the recent “Justice for Jane” push to Congress.

“Abortion care” is big business in the United States, though fewer women lately take that option. It’s interesting to note that despite the abortion industry claims that they are under attack, Planned Parenthood, for example, saw a 27 percent increase in profits in its last report, including almost $544 million from taxpayers. But with an eye to increasing profits, a move seems underway to expand the pool of possible clients to all on U.S. soil.

Voters do not want their financial obligation extended to “all of the above.” Opposition to expanding federal funding of international abortions is almost universal. Support for a ban on that kind of funding reaches as high as 83%, something legislators should keep in mind as activists continue to force the issue. Since the Texas case, several other girls were brought forward, with attorneys claiming a right to an abortion in the United States as well.

But in an eerie comparison to Roe v. Wade, which was built on a deception that Norma McCorvey, the Roe in Roe v. Wade, wanted an abortion (she was seeking a low-cost divorce), one of the young women embroiled in a current case involving a “right” to abortion for all on U.S. soil reports that she also wants to choose life for her baby and that she does not want to be affiliated with the abortion advocates working on her case.

Central to both immigrant teen cases is Rochelle Garza, an activist attorney working with the ACLU trying to create an international right to abortion. Garza, who is currently facing misconduct charges for her role in the October case, faces further criticism now that another one of her client’s said she would no longer like to be represented by Garza and does not indeed want an abortion.

As the Justice Department looks into the conduct of the ACLU attorneys in the Texas case, it’s interesting to note that Garza is also the attorney in a class-action lawsuit that seeks to block all HHS officials from intervening in similar situations. Abortion, more than assisting immigrants to meet their goals, seems to be the top-line agenda.

Such legal extremism is nothing new to those of us in the pro-life movement.

According to McCorvey, her attorneys often misled or deceived her. She has described her attorneys’ conduct as “looking for somebody, anybody, to use to further their own agenda. I was their most willing dupe” and noted “my lawyers lied to me about the nature of abortion. Weddington convinced me, 'It's just a piece of tissue. You just missed your period.” She also signed an affidavit attesting to the details of her case, some of which were wrong, such as being raped, without reading it. She never went into court and was minimally involved. She never got an abortion, and instead, placed her child with an adoptive family.

Compare McCorvey’s words to a handwritten statement from the girl embroiled in the current immigrant abortion push: “The people I saw yesterday were lawyers that made me sign, I ... do not need their help because I do not want to have an abortion.”

Do we see a pattern? Attorneys with an ideological agenda find someone who is scared or in a desperate situation. Then, they work to manipulate their client, bending the facts to suit their purposes. For the most part, the media ignores the reality of the woman’s plight, celebrating the abortion win.

President Trump’s Department of Justice is rightly investigating the attorneys in this case for their actions. Undocumented teenagers who are pregnant and seeking a new life in the United States should not become pawns of the abortion industry’s drive to increase their market share. The ACLU for their part celebrates their involvement in an abortion case, just as Sarah Weddington, who downplays McCorvey’s public statements.

But the ACLU seems to want to party likes it’s 1973, pushing a hurting woman to the background to force an abortion agenda, in this day and age of #MeToo we are listening to the stories women share. The fact that women report that they are being pressured to comply with an abortion agenda must not be ignored. Women deserve better, and their babies deserve a chance at life.

Kristan Hawkins is president of Students for Life of America, the nation’s largest pro-life youth organization, which has more than 1,200 groups on college and high school campuses located in all fifty states.