Hillary and Bernie Getting a Huge Pass on Abortion

Kristan Hawkins
|
Posted: Feb 25, 2016 12:15 PM
Share   Tweet
The opinions expressed by columnists are their own and do not necessarily represent the views of Townhall.com. 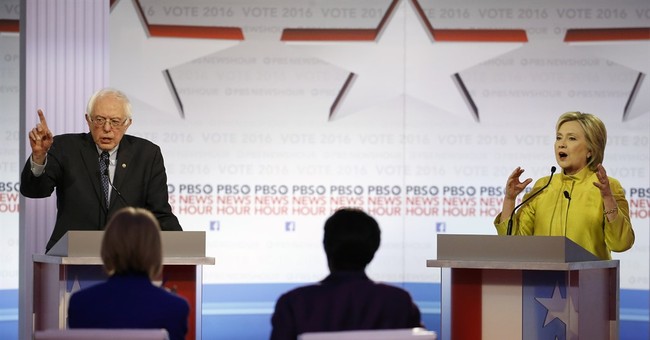 While this election cycle is like no other our nation has experienced – who would have thought the front runners would be a socialist versus a reality TV star? – one particular issue has been brought up multiple times during one party’s debates and zero times during the other party’s debates.

During the first few Republican debates, the candidates argued which one would defund Planned Parenthood, the nation’s largest abortion vendor, during their first days in office. The undercover videos from the Center for Medical Progress had recently come out, which showed Planned Parenthood executives and abortionists discussing the harvesting and sale of baby body parts.

Planned Parenthood and abortion were brought up during other Republican debates, where candidates sought to define their own viewson being pro-life and defend their beliefs on exceptions, or no exceptions.

There have been nine Republican debates so far and abortion was at least mentioned, if not discussed at length, in most of them, which is oddly in contrast to the Democratic debates, where abortion has been mentioned in zero of those five debates. It was a close call during the last debate. Planned Parenthood got a mention but the word “abortion” did not.

Democrats consistently play the ‘war on women’ card, diminishing women to merely a voting bloc itching to pull the lever for the candidate who panders to the one and only issue of access to abortion and “reproductive rights,” as it is often coded in talking points.

So why aren’t the Democrats asked about abortion at every debate? Why aren’t they duking it out on stage as to which one of them wants more late-term abortion facilities opened up or more loopholes that force taxpayers to fund abortion?

Why aren’t they asked about support for a ban on abortions after 20-weeks, when babies in the womb are most likely to feel pain?

Why aren’t they asked if they favor any kind of restrictions on abortion whatsoever, or to put in the language Republicans get, are there any exceptions where they think abortion should be made illegal?

The Democrats aren’t pressed on abortion during debates because it would be a disgrace to their party if Bernie Sanders and Hillary Clinton got up on stage and started arguing who would uphold Roe v. Wade in all its glory of making abortion legal in this nation throughout all nine months of pregnancy for any reason whatsoever.

If the networks were truly interested in fair coverage on both sides of every issue, here's how I imagine the abortion Democratic debate question going:

Moderator: Both of you on this stage are in favor of abortion. Are there any restrictions at all that you favor? Taxpayer-funded abortion, parental consent, sex-selective abortion?

Hillary Clinton: I am in favor of a woman’s right to have an abortion and that should never be restricted.

Moderator: So not even if the woman wants to have a boy and she is pregnant with a girl and therefore wants an abortion?

Hillary Clinton: Women should be able to have an abortion for whatever reason they choose. It’s a personal decision.

Bernie Sanders: [yelling] Women should be able to do whatever they want with their bodies! I’m for abortion if the woman is for abortion.

Hillary Clinton: Me too! Women can have abortions right up until they day give birth.

If Hillary and Bernie were asked about their views on abortion, they would show exactly how extreme and out of the mainstream they truly are on abortion. Americans are overwhelmingly against sex-selective abortions, with 77% favoring a ban on them. According toGallup, 64% of Americans think abortion should be illegal in the second trimester and 80% believe abortion should be illegal in the third trimester.

Contrast this with Hillary Clinton’s

A baby at the very end of the third trimester is a viable, little human being. With today’s technology, babies born even in the second trimester can be viable and live healthy lives.

Clinton’s position is beyond radical. It is so outside the mainstream point of view on abortion that only other extremists would rally around her and support such an insane position on abortion.

The candidates take these extreme positions to get the backing and money from the “Walmart” of abortion, Planned Parenthood, and then shut up about them when courting my grandma for her vote.

Before the last Democratic debate, NARAL Pro-Choice America blasted their email list, asking supporters to sign a petition that demanded the moderators ask about abortion because, “Being *just* pro-choice is not enough anymore.”

The same group went ballistic when the makers of a popular snacking chip took to the Super Bowl airwaves and dared to show an ultrasound that showed a real, live baby making baby movements and doing baby things inside of its mommy. They were mad that the commercial “humanized” the baby. Uh, yes, that’s because it is a baby.

Maybe that’s what the Democrat debate moderators should ask. Start out easy. Ask the candidates if they favor ultrasounds, because *gasp* it shows an actual human baby.

Oh, STFU: Vox Article on 'Invasive Species' Goes Exactly Where You'd Expect in the Woke Universe
Townhall
It's not a lie if he believes it! Joe Biden describes the time he went to Israel and met with Golda Meir during the Six Day War, even though he didn't [video]
Twitchy
Kennedy Traps 'Wild-Eyed Leftist' Biden Judicial Nominee in Yuuge Lie
Redstate
40 Years Ago, Monty Python Predicted (and Mocked) Wokeness
PJ Media