Setting the Record Straight on John McCain and Sarah Palin

Kimberly Fletcher
|
Posted: May 17, 2018 12:01 AM
Share   Tweet
The opinions expressed by columnists are their own and do not necessarily represent the views of Townhall.com. 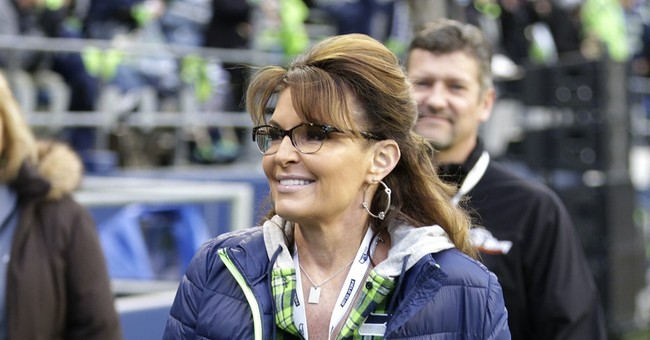 We have been very privileged of late to see real class from women in positions of leadership. Dana Loesch, for instance, who had the courage to sit in an arena full of angry students and teachers fielding their anguished questions with competence, compassion and class. Sarah Huckabee Sanders, who displayed the epitome of class at the White House Correspondence Dinner, where she was lampooned with vicious insults from a self-identified “nasty woman” posing as a comedian. And most recently, Sarah Palin who has once again become the object of ridicule after John McCain announced he regretted choosing Sarah for his running mate. (With friends like that as they say.) But in quintessential Sarah Palin style, with ultimate class and dignity she refused to disparage the man she thought was her friend.

In the era of “nasty women” it is really nice, and quite refreshing, to see women display the best in us for a change. I would not disparage Senator McCain any more than Sarah would but I dothink it’s time to set the record straight about Sarah Palin, John McCain and the 2008 election.

I was one of the many moms who volunteered with the McCain/Palin Campaign. I served as the operations manager for the Victory Center in Dayton, Ohio—very different from the usual center. It was run almost completely by homeschool moms. The back room was reserved for our children to do their school work in between walks lists and shifts on the phone bank. The lobby looked like the front room of a cozy cottage complete with rocking chair, sofa and various Americana items sprinkled through the room. The hall across from the phone bank area housed a wide selection of snacks and moms from the community brought crockpots of food to feed the volunteers who were basically living at there. The uniqueness of the Victory Center wasn’t just in the staff and the décor but whythey were there.

As I wrote in 2008, I have never been a McCain fan. In fact, I couldn’t believe he ended up being the nominee. I deeply respect and honor him for his service and sacrifice to our country but I’ve been incredibly disappointed with his Senate record. He has time and again shown an extreme lack of good judgement, poor leadership, and terrible, even sometimes disastrous, votes. In all honesty, I had determined to be one of those disgruntled voters staying home that election. Enter—Sarah Palin.

Prior to Sarah Palin taking the stage there was a literal flat line in the Republican voting base—a huge disadvantage to any candidate. Elections aren't won by parties, despite popular opinion among party leadership. They are won by a myriad of dedicated grass roots volunteers, hardworking Americans who believe in something greater than themselves and are willing to fight for it. But 2008 left us with dismal choice of going to the polls and hold our noses—once again—or just stay home.

Up until the moment Sarah Palin walked out on that stage in Dayton, Ohio, I would have told you—as I repeatedly informed the McCain campaign—I didn't think there was anything in the world they could do to get me to vote for that man let alone work day and night for him. But then, there was Sarah who shot a dose of energy into that campaign equivalent to a Hail Mary at a Huskers game. She walked onto the stage and right into our hearts.

Homemade pink glitter hats and signs displaying slogans like “Palin Power,” “Mama Bears Unite,” and “Read My Lipstick” began popping up all over the country.

I not only joined the campaign, I literally lived in the Victory Center for over a month, scheduling the phone bank, organizing walk lists, and personally walking neighborhoods, knocking on thousands of doors with my kids. Our children did math in the morning and civics all day long. It was amazing. Moms from all over the country came to join us, knowing how important the battleground state of Ohio was.

I remember the day the phone bank volunteers approached me with a dilemma. We kept getting people saying they were voting Republican in the election but answered, “no” when asked if they were voting for John McCain. I puzzled over it for a few minutes and then it hit me. “We need the change the question,” I said. “Ask them if they are voting for McCain/Palin.” Suddenly all the answers began coming back yes. There were even some callers who emphatically said, “No, Ma'am, I’ve voting for Sarah!”

I have to admit, I gained a new sense of respect for John McCain in that election. Choosing Sarah was a remarkably brilliant move on his part. In just 10 minutes I went from being adamantly opposed to McCain to being ready to work night day for him—just so we can get her. McCain was finally using his Maverick status for something other than "crossing the aisle" and it was awesome! Suddenly there was something really worth fighting forand not just against. Because McCain chose Sarah, we began to believe in him.

I’ve worked on a lot of campaigns but what I saw at that Victory Center was something I just haven’t seen on any other campaign. Every day held a little miracle that inspired me—mothers who came into the center with their nursing babies, the woman who came in every day for 6-8 hours calling volunteers to fill the phone bank, the young mother, seven months pregnant, who came in every morning with her three little children to walk neighborhoods and make phone calls. Her little family almost single handedly walked every neighborhood in Huber Heights, Ohio.

I doubt Sarah Palin will ever truly know how much good she did for this country simply by having the courage to join the fight. Despite the outcome, what she did for this nation in that short time that she was willing to propel herself and her family in the National spotlight was phenomenal.

Maybe it is true John McCain regretted choosing Sarah, but the fact is, Sarah Palin was the energy that breathed life into that campaign. Heck, she wasthe campaign. Choosing Sarah Palin was the smartest decision McCain made. It was the one thing that rallied a nation behind him and something he can truly be proud of. Regardless of his poor senate record or his disparaging remarks about the election, we can always be grateful for what we’ll remember most about him—he gave us Sarah!