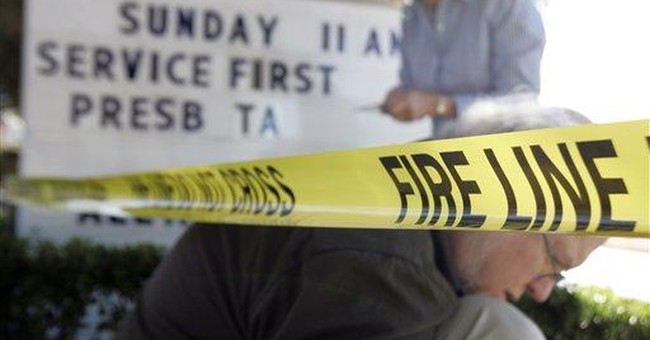 You may have been surprised to learn about the 10 East Texas churches burned down by arsonists since the beginning of the year. In fact, maybe this is the first you’ve heard of it. That’s almost two per week, and the mainstream media was largely silent on the whole matter—not giving it much coverage until two men were arrested.

What was getting plenty of coverage were stories like whether Tiger was truly sorry and the kerfuffle that resulted from President Obama’s suggestion that Las Vegas might not be a great place to invest your money.

One might argue that these church burnings weren’t a big deal because they haven’t been focused on one particular racial or ethnic group. It’s not a stretch to say that the media likely would have been all over this story and loud, public demands for justice would have been issued by scores of politicians had this been the burning of 10 black churches, or 10 synagogues or mosques or 10 faith centers for people who practice homosexual behavior. In fact, it would have caused a national stir—church or no church—if facilities housing groups advocating issues like global warming, animal rights, abortion or gun control had gone up in flames.

But no, most of these were just plain old, traditional, Protestant churches in the Bible belt—the kind of churches Americans have been going to since long before there was an “America”—the kind that have been cornerstones of our communities, encouraging and defending basic morality, for hundreds of years. Some media outlets are spending all their time focusing on the fact that the men arrested had some religious upbringing. Why wasn’t there reason enough to stir a little outrage, ruffle a few headlines, earn a few sound bites on an evening newscast prior to that?

Because religion is “out.” This complete lack of any church fire alarm is just the latest evidence of the increasing effort nationwide to marginalize religion and the church in this country.

Something fundamental...something vital...something irreplaceable is changing in our nation today. In his farewell address as president of the United States, George Washington said, “Of all the dispositions and habits which lead to political prosperity, religion and morality are indispensable supports.” He said that “reason and experience both forbid us to expect that National morality can prevail in exclusion of religious principle.”

But maybe that’s okay, these days, for many Americans. Morality may actually be a luxury we no longer choose to afford. Around the country, atheist groups have been renting space on billboards and public transportation to challenge the need for—and even the merits of—religious conviction. Slogans like “Being a Good Person Doesn’t Require God,” “Imagine No Religion,” “Beware of Dogma” and “Praise Darwin—Evolve Beyond Belief” are now being displayed in huge letters on buses and signs all over America.

And religious convictions aren’t just on trial in the court of public opinion, either. Anyone closely following the sure-to-be landmark case of Perry v. Schwarzenegger—the one designed to set aside the vote of millions of California voters to preserve what happens to be a biblical view of marriage—will quickly realize that it’s not really marriage, but the rights and credibility of people of faith that are being brought into judgment.

Of course, in America, any group or individual enjoys the free speech right to criticize religion in general or any specific religious beliefs with which they disagree. That’s a foundational principle of our great nation. But if people of faith stand idly by and don’t counter this anti-religious sentiment with positive—even courageous—speech of their own, another foundational principle will begin to erode: religious freedom.

Like the proverbial frog in the boiling water, this marginalization of people of faith is happening so slowly that no one feels alarmed. But if people of faith don’t begin to speak up now, the burning of a few churches won’t be the only non-event that fails to spark the interest of the major media and the restless attention span of our fellow Americans. People will soon be questioning why it’s necessary to protect the church at all…and the subjugating of religious freedom to “more important” interests won’t even make the back page or that scroll across the bottom of your CNN screen.

When that happens, it won’t just be churches, but the first and most important of all American freedoms—religious liberty—that lies, unmourned, in ashes.