Dear America, The LEFT Has Declared War On You

Kevin McCullough
|
Posted: Jun 24, 2018 12:01 AM
Share   Tweet
The opinions expressed by columnists are their own and do not necessarily represent the views of Townhall.com. 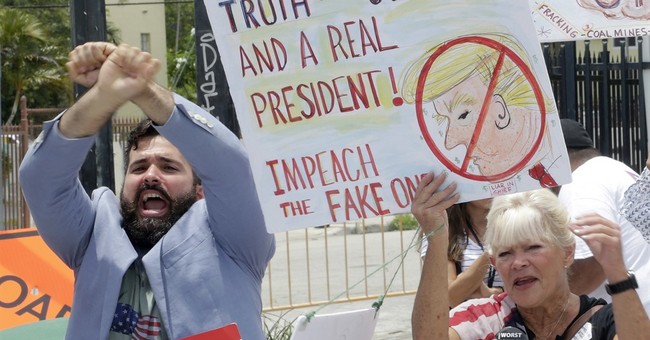 Dear America, the societal left has declared war on you.

While you’ve been busy enjoying your new jobs, improved wages, lower taxes, and less government interference in your life the left has decided that all of those things are immoral. They must be undone. And those who enjoy them must be made to understand that they are not good American citizens, but some sort of participant to hurt others. They would love to say it makes you a racist, except that African Americans and Hispanics are enjoying the best economy they’ve ever known in American history. They would love to say your lack of desire to give government more and more of what you earn makes you an elitist, except that you aren’t. You’re creating new companies, hiring more people, and taking control back of your personal choices. This leaves less capital for them to make choices for you and run your life with. Therefore when all options have been exhausted their desperation leaves them with only two options—conform to the new energy transforming life, business and people in America, or destroy it.

They are displaying raw unmeasured contempt for you.

In the past week public mobs—always organized by leftist groups—have taken to public harassment of women who merely work for the current administration. Secretary Kirstjen Nielsen was literally shouted at until she left a dinner at an eatery near the White House. Press Secretary Sarah Sanders just Friday evening was told she would not be served (nor her family) at the Red Hen eatery of the Shenandoah Valley in Lexington, Virginia. She was told she was refused service was because she works for the President. Secretary Nielsen has had additional groups camped outside her house playing loud speakers, disturbing the peace of she and her neighbors. Entitled leftist celebrities like Robert De Niro bogart awards shows encouraging viewers to sexually violate the President. Washed up former TV stars like Tom Arnold claim they will harass the First Lady at her son’s school. And true Hollywood losers like Peter Fonda claim that Sarah Sanders’ as well as Melania Trump’s children should literally be raped by pedophiles and sex traffickers.

They believe they can and will eliminate you in a big blue wave in November.

There is an obvious purpose in the illegitimate behavior that they are engaging in. Taking the primary methods of the losers from the “Occupy” movement they believe there is no moral barrier stopping them from doing any thing at all (in their way of thinking) “necessary” to take back power. They believed they had finally launched America onto its great socialist enlightenment under dear leader Obama, and they all but believed they had eight more years with the Hillary Clinton presidency. The only problem turned out to be that she was a horrible candidate, and Trump understood the people of this country better than she did. That’s why he routed her. In a contest of states 33 to 17 is a spanking by any measure.

They no longer (if they ever did) believe in the rule of law.

That they had control of extended reach into law enforcement, justice, the judiciary, and all of the media and entertainment elite allies they enjoy, the left never believed that they would ever see the tornado of activity that has occurred in the first eighteen months of the Trump administration. A Supreme Court Justice who will reliably remove power from the hands of government, twenty-four appellate court judges, and seventy-one additional judicial appointments that all reflect that same judicial temperament add up to a limited window of time before much of the anti-constitutional hackery that has taken place over the last few decades is toast. But they are content to undo as much of what is true just and good as they can on any level. This week Gubernatorial candidate for New York—Cynthia Nixon—openly advocated for the elimination of Immigration & Customs Enforcement. She claimed they had gone adrift from their mission. Yet their mission is to do nothing but enforce immigration and customs law.

They have tried to ambush our representative form of governing—believing along the way they had the right to do so.

Their activist agents in the FBI (at least five of them identified in the report released by Inspector General Horowitz) demonstrated that their was no filter governing their approach to investigation. Agent Strzok volunteering in texts to sympathizers they he/they had the power to stop a lawfully executed election and that they would. The slimy behavior of Comey, Lynch, McCabe and Dr. Rice, their willingness to countenance, cover the backside for, and go the extra mile to mislead everyone only demonstrates this idea that they have no responsibility to respect the process of our republic. They feel entitled not only to disagree with us, but to rig the system against us in an attempt to force our conformity.

They will sink to any level necessary, even the prostituting or in some cases the threatened molestation of children to make their point.

That they were willing to threaten the children of the First Lady, the Press Secretary and joking or otherwise suggest molestation as a way to even the score against their opponents, is sick. That they literally seem unmoved by the fact that smugglers and human traffickers will thrive if we re-adopt their catch & release procedures is even worse. Yet even in the debate over such policy they lied in using pictures from 2013-14 to justify their rage They were just fine with TIME magazine lying through its teeth on this week’s cover, and they have no perception of the danger endless catch & release has on our neighborhoods, hospitals, and schools. All of which indicates their unwillingness to literally care for America as opposed to many others who wish to come here without a commitment to “be” American.

They believe you have no right to think, opine, govern, or act in any way that creates dissonance with their core beliefs.

Follow any number of left leaning celebrities, pundits, politicians, public figures & elected officials on Twitter (as I do) and you will easily see that everything I have argued here is already happening. The desperation at the loss of power, the open & undeniable hostility towards traditional America, their mockery making of our elections, laws, and public servants, their use of any and all tactics to fight back regardless of how gutter-prone they may be all pale in comparison to what they believe about their own beliefs. No longer interested in a pluralistic society with many different world-views competing in generations’ long struggle over ideas. They have had enough. They are not interested in hearing opposing viewpoints, much less allowing them to prosper. This is why they want no church to teach that abortion is taking a human life, many sexual behaviors are literally unhealthy, or that people should choose to do good vis-a-vie their earnings vs. being forced to at the government’s point of a gun.

All of these were on display over the past week.

Every one of these points was illustrated on some level. They have declared a war on America. What America is. What she stands for. What she believes. They are angry. They are fueled by hate for everyone who disagrees with them—though many may describe it as piously as a law professor claiming to see a court case from all sides. They are bitter. And they are ticked that America is prospering, making more money, doing more good, and getting better sleep than they do.

War has been declared, and we can only hope that America responds in the best way she knows how—under God, with Liberty & Justice for all.