Lies The Anti-Gun Left Tell & That MUST Be Confronted Now!

Kevin McCullough
|
Posted: May 20, 2018 8:50 AM
Share   Tweet
The opinions expressed by columnists are their own and do not necessarily represent the views of Townhall.com. 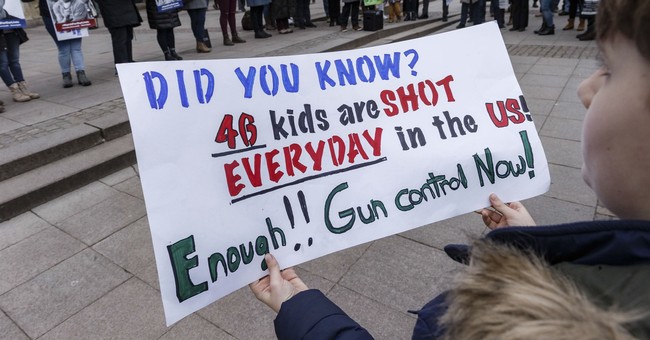 The sociological, theological, cultural and political left lie often. This is not new.

That they lie regarding the issue of guns is taken for granted. That they do so in the aftermath of children dying—usually as a result of their horrid policies—they do so with such predictability you could set one’s watch to it.

The shooting in Texas this week was no exception. Within minutes of the first reports breaking the wires, the twitter-verse had exploded worldwide with the demands that “something be done.” (And you realize that they say this as though they are the only ones who think so.) They do so in such a way that if you don’t 100% agree with their “ideas” (they have precious few) they throw pejoratives faster than breathing.

Following the Parkland shooting I desired to start an honest dialogue about ideas that reasonable people could garner support for, while spending very little money, and on a timeline that could be implemented tomorrow. More than a million page views later the seven simple steps to eliminate school shootings overnight received lopsided approval and far many more asking than not, “can we implement these now please?”

Not surprisingly that column again began bouncing around twitter and the rest of social media on Friday.

I noted a different twist however. The left that hates the second amendment is attempting to morph their message to make even those who put forward such simple goals (non-partisan, and completely commonsense) appear to be the extremists. They do so using a series of surprisingly effective lies. To confront them just to correct the record would be of benefit. But because they are using these lies to delay taking steps that would actually save children’s lives—these lies have to be crushed.

Kids are dying because of the lies these people are telling.

1. The left has a true understanding of what’s at stake. Spend time attempting to help them understand simple facts is a frustrating effort because they have no capacity to admit what the truth is. The “something must be done” comment is almost always followed by, “but Trump doesn’t care, neither does the NRA, and certainly not conservatives.” The truth is, that as a commonsense, clarity-driven conservative, I’m one of the few people in the punditry of America that has actually put forward a plan that would factually come close to eliminating school shootings overnight. Why did I do so? Because I have kids in schools and I passionately agree with the “something must be done” sentiment I’m driven to see solutions put in place. My list of seven simple steps may not be conclusive, stop everything from ever happening again, but because I based the ideas on what would have stopped every school shooting since Columbine much earlier than any of them did on their own I’m willing to put my plan to work. The left seems to think that theories need to be tested. And while they argue “never again” they don’t actually mean it, because no one from the left has stepped up to say, “Let’s work on solutions that save lives tomorrow.”

2. Criminals Aren’t So Bad. How awkward I felt for the left as they attacked President Trump this week for calling the gang members of MS13 (operating in 42 states) “animals.” Some of the very same people in my twitter feed went from decrying the President for his brutality in not recognizing the humanity of the members of MS13, and moments later screeching screed after screed of why school shooters must be stopped. MS13 members—I personally believe—are given to demonic or satanic possession. There simply is no other explanation for how they rape young girls, dismember them, and even then sometimes document the carnage with photographs. If I lived in an area of the country where MS13 roamed with Obama-style impunity, I would regularly carry self defense weaponry, for simply no other reason.

3. Police Are Worse Than Criminals. I don’t think anyone would really be shocked to read that there is a region to region war on law enforcement. Even though killings by police are at record lows, the very same crowd that is screaming about “someone doing something” to stop the killers who seek to kill our school children, regularly condemn all police for the actions of the less than 1% who have done criminal acts of their own. Even after Parkland, when the Sheriff’s office’s coward-like actions were exposed, the “Fab Five” led by David Hogg told those who wanted to strengthen security on school campuses to take it easy on the officers who hid instead of confronting the attacker. He literally went on cable news to argue that he “didn’t blame the officer” because the shooter was using the weapon that Hogg is now trying to ban. (No AR15 has been used in any of the school shootings since Parkland for what it’s worth. In Texas it was merely a shotgun and a revolver.)

4. No One Other Than Law Enforcement Must Have Guns. Despite the deep cognitive dissonance that this lie produces based on the last two, nonetheless this has been the argument they continually make. Reasonable people can see through this. This is simply a way to say there’s not enough “scrutiny” or “laws” or too much “access” therefore law enforcement are the ones we “allow.”

5. Hardening Targets Imprisons Free People. In the “Simple Seven Steps” ideas were adapted to specifically counter the attacks of Columbine to Sandy Hook to Parkland. If all seven are adopted it virtually guarantees no school shooting—even if tried turns into the mass casualty events that we have witnessed. When left-leaning anti-gun social media users read it they are left with little to no factual basis to counter it with. So the new talking point in response is “why do you just want to turn our schools into prisons?” Mind you I don’t believe these people are genuinely as stupid as they are pretending. They are by necessity playing a game in order to advance the agenda. So attacking the most down the middle moderate steps possible—especially ones that would save our children’s lives must be discounted. What they call “imprisoning our campuses” when (according to them) “campuses should be worry free zones of education” is actually one hundred percent backwards. Hardening a target—especially a school campus—is similar to playing defense in any oppositional situation. Layers of defenses beats trying to count on all of society no longer having ANY criminal or evil impulse. Mass shootings ALWAYS happen in areas where almost NO defenses exist. Controlled traffic through limited entryways and exists establishes a perimeter, personnel (former military and law enforcement) walking the grounds and doing occasional bag checks are the next layer in, metal detectors at the building is layer three, reinforcing infrastructures with better locks, doors, windows is layer four, and people on the inside—properly trained people whether uniform officers or ground marshall staff, who can shoot back IF the shooter gets through the first four layers may be the layer that takes a shooter down instead of killing a dozen more before reloading. No general planning a defense of an area would simply hope the enemy doesn’t come walking into range. Instead perimeters, ID’s, controlled access, and the evidence of a vibrant response are all parts of a properly hardened target.

6. The BIGGEST Lie Of All, They Don’t Wish To Ban Guns. No matter how many facts and rational arguments you put forward, no matter how much proof there is that hospital medical mistakes killed 263,000 Americans last year, while guns killed 15,600, no matter the degree of patience you show in trying to explain why defending students first and arguing age limits and rifle types etc will save more lives… they don’t care. Eventually the discussion turns to “no one really caring” because “something must be done.” And that something is always the removal of guns from the population. They lie and say it isn’t but their ultimate arguments always turn in that direction. Strike up a discussion, and watch it happen.

I remain as steadfastly committed to protecting our children as ever. The school in Texas only practiced two of the seven steps.

Last thought, for those who believe that “hardening targets” imprisons our children, an observation.

Every day I walk across the main level of the Oculus. It is the shopping mall/transit hub that sits at the base of the new World Trade 4 building. Every day there are more than a million people that walk through it as well. Every day I can likely count 6-10 uniformed military members, and about the same number of NYPD. When I’m able I stop them and say “thanks” for protecting us. I’m wise enough to understand that even their mere presence makes the likelihood that someone will ever open fire on the crush of humanity in this completely open area is very low. None of us feel imprisoned. We feel protected. They aren’t taking our freedom away by standing their post. They are defending it, by defending us.

Doing the same for our children, isn’t imprisonment, it’s providing for their defense.

We live in evil times, being vigilant is the new reality, and combatting the lies that keep us from realizing this is the first step in creating the peace we all long for.