About Those Evil Guns 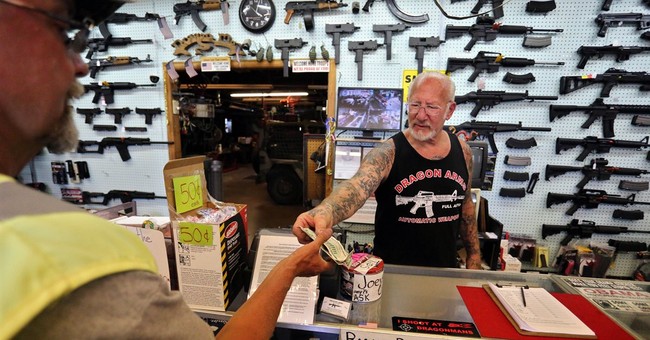 The lying President of the United States said this, “We know that the states with the most gun laws tend to have the fewest gun deaths. So the notion that gun laws don’t work, or just will make it harder for law-abiding citizens and criminals will still get their guns is not born out by the evidence.”

Only in the mind of Barack Obama.

Would the President like to attempt some fifth grade level research?

Roseburg is in Oregon. Columbine and Aurora shootings both occurred in Colorado. California the number one most restrictive gun law state--is home to 4 of the top 30 “murder capitals.” New Jersey is home to the most murderous city in the U.S. in addition to holding 3 of the top 30 “murder capitals.” Massachusetts’ sitting duck population made the Boston terror incident more likely. Connecticut was home to the Newtown tragedy. Maryland’s Baltimore ranks number 11 on the top 30. Illinois which has some of the most restrictive laws saw Chicago top 500 murders per year in 2008 and 2012. Pennsylvania sees contributors Philadelphia, and Chester both contributing to the top 30. And Michigan occupies 3 of the top 7 top 30 slots this year, and held 4 of the top 6 last year.

The President was either fudging the numbers, or just flat making stuff up. He might have even been hiding behind the qualifier “tend to have.”

Whatever his motivation, he was full of poppycock.

And his views are dangerous.

The truth is the more that President Obama pushes for civilian disarming, the further he goes from preventing violent crime.

In one of the earliest modern cases of “open carry” Kennesaw, Georgia—a well known suburb of Atlanta—put “open carry” into effect in 1982. In one year violent crime was reduced 82% from before the law was changed. And a full decade later crime was still 72% lower than in 1981. In 2014 Quinnipiac University published the results of an exhaustive study that indicated that states that restrict concealed carry laws experience dramatically higher gun-related murder rates.

Dare we even bring up the fact that Texas this year passed a law, in effect now, that is dropping the rate of violent crime on it’s university campuses because it allows properly registered and certified students who already own guns to carry them on the college campus as well. In fact, be sure to check back with them in June to see what happened to the rates of campus rape, sexual assault, and petty armed burglary. But need we also remind everyone reading that the mass shooting that never occurred regarding Pamela Gellar had three hundred persons gathered to view cartoons of Mohammed and two armed muslims drove up with the intent to slaughter everyone in attendance was only thwarted because of legally armed citizens who held those terrorists instantly accountable.

Did the President even know that the nine states with the lowest violent crime, are all right-to-carry states? Does he know that law-abiding gun owners use guns some 2 million times per year in stopping violent crime?

This weekend I—like many of you—suffered the ignorant and uninformed in our social media feeds, many of them kvetching about why something "can’t be done” to stop the continuation of these violent outbursts. Perhaps like you, I was a bit dismayed at how out of touch leftists are in understanding the simple basics.

One researcher discovered through interviewing convicted felons over the last decade that a criminal is 57% more likely not to follow through on a criminal impulse if they merely believe a lawful gun owner is present. The same researcher found that a crime is less likely to occur if the criminal sees the presence of lawful gun-owners. The mere sight of the law-abiding gun deters more than any other impetus tested.

The bigger problem in my heart and mind is the President’s blatant moral failure on the issue. When as much data exists, to willfully mislead the American people to believe the very opposite of what it demonstrates is itself gravely immoral, and some would make the case—even murderous.

It’s actually quite true, the best thing to stop bad guys with guns, is for good guys to have more guns.

The killer in Roseburg, whose name history should forget, had no character, and he feared no accountability. When those who have character, enforce accountability, the President’s solution will be found.