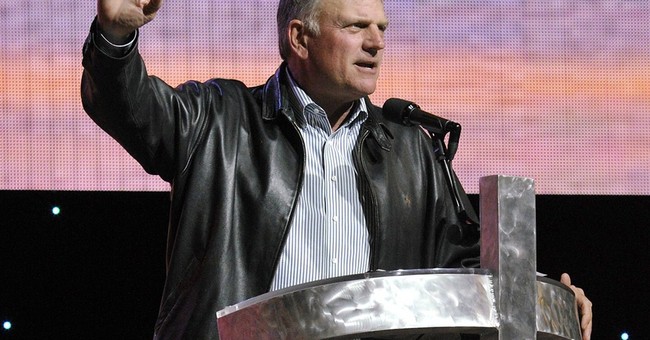 This past week the political left (disguised poorly as religious leaders) unleashed an all out assault on one of the few leading Christian leaders that has the audacity to take his faith beyond the pulpit and into the global marketplace, hoping in every way, to make a difference.

And what was the motivation for those who spewed the venom in the direction of Franklin Graham—joint head of both the Billy Graham Evangelistic Association as well as Samaritan’s Purse?

Put simply Franklin Graham offered three concrete reminders for how we as a nation could remedy some—if not many—instances in which a law enforcement official fires his weapon. His plain spoken—even blunt—advice was not well received.

Though it is an absolutely true statement that had Michael Brown followed Franklin Graham’s simple advice, he would be breathing today. Police officers would not have been injured, and the citizens of Ferguson, Missouri would never have had to experience Brown’s step-father telling residents to “burn the b*tch to the ground” (meaning the town.)

Graham’s advice in summary was:

2. That parents should do a better job of teaching our children to recognize and obey lawful authority.

3. That our society should more greatly encourage these ideas.

His message was that if we as a culture “simply” did these things that police violence would happen less often. And he reminded the secular society that the Bible indicates that lawful authority (authority that does not abuse its position) is given as a protection to a nation because those who hold those positions account to a higher authority than mere man and will suffer judgment and consequence beyond earthly ones.

In response Jim Wallis, Rachel Held Evans, and a host of theologically challenged activists issued a letter to Franklin Graham in short stating he had sinned against them, and that they required him to “repent” before he “broke” Christianity any further. They accused him of abusing scripture, omitting a number of other topics they would have preferred he mentioned, and ended up more or less blaming him for advancing corruption of local police actions everywhere. Jim Wallis, a radical left political activist who pretends to represent evangelical perspective, went so far as to label Franklin Graham racist, or at minimum accusing him of being oblivious to racial inequality and of harboring racial biases.

It is important to point out that while Graham’s original comments were directed at all people, of all racial stripes, and intended to be a universal bit of advice for all of humanity, Wallis and company however immediately claimed racial bias and began inserting race into the matter.

There was nothing in Graham’s advice that commented pro or con on the matter of racial injustice, incidents of police brutality, a biased legal system, or political or civil opinion on the outcomes of any specific recent cases. Though it is without question that had Michael Brown and Eric Garner both immediately followed his advice—both would still be breathing today.

It’s my sense that Graham was also attempting to urge the society to look long term, hence the advice to parents, and to the leaders of the nation to encourage these principles.

I should also point out that the most prominent of New York City African American pastors have told me that these are the exact same instructions they have taught their children, especially sons. The two most prominent confided in me that while they had more incidents of bias displayed against them as younger men themselves, their sons have received notably better treatment and experience—largely because of the respect their sons have for the authority of the police they have interacted with.

Wallis’ silly open letter to Graham also ignores the increasing diversity of all police forces across America today, especially in cities like New York or Chicago where African Americans outpace the actual population in representation on the force.

Lastly to accuse Graham of prejudice in regards to race, utterly ignores and flies in the face of every African AIDS baby he has held, helped feed, or bring medicine to. To claim that he is uncaring toward the injustice of those mistreated, ignores the reality of every South Sudanese Christian woman he has labored to free from slavery and trafficking. To even insinuate a lack of compassion in Graham’s heart towards the most immediate incidents of racial strife and tensions in America, is to wholly gloss over the fact that his organization—at his instruction—has sent dozens of chaplains right into the heart of the hotbeds of places like Ferguson to volunteer six weeks or more of personnel and resources to help those most harshly effected to begin to heal and get their lives back on track.

Wallis and company have pretty much zero track record of anything resembling one tenth of this kind of proactive intention or action in regard to societal healing.

These political leftists are opportunists. They decry things for political purposes when in reality they are seeking attention, platforms, and power.

Wallis and all the signatories of the open letter to Graham are “yappers," who bloviate on command, and make instantaneous pronouncements of people’s character even faster.

Graham, while by no means perfect—nor would he ever attempt to claim as much, is a man who practices what he believes, long before he preaches it.

And that’s a lesson every leftist would do well to attempt to learn.