The View From The High Horse 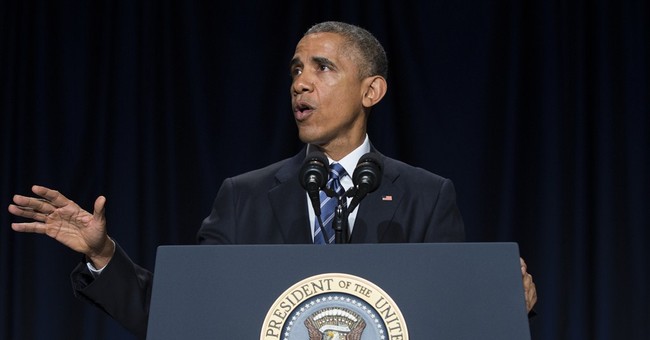 While President Obama attempted to eviscerate a wholly righteous anger in the hearts and minds of the American people earlier this week--he took to chastisement as his verbal bludgeon of choice.

But that anger, is an anger that is directed at the Islamic State for more or less living up to the basic tenets of their holy book. Those who do not share a reverence for it, rightfully point out this hypocrisy with concern for the welfare of our own children.

The President's choice of venues to express these sentiments was also quite odd. The National Prayer Breakfast was once known as a time to exalt "Christ above all others."

So of course it makes complete sense for him to go out of his way to add the Dalai Llama, several Muslim Brotherhood members, and a few other ingredients to the mix.

That he would yammer on about the importance of the presence of the Llama, discuss the atrocities of Christians (a thousand years ago,) and ignore the acts "done in the name of Islam," demonstrated the contempt he even has for the very event--much less the prayer it generates to support his administration.

His justification of modern day ISIS in any regard is stomach churning.

But using his equivalent third grade perspective of history to tell us this went beyond ignorance to willful "misremembering."

The benefit of such is that thousands of memes, Twitter users, and social media conversations have taken his poor historical aptitude to task.

Which they should have.

For the sake of space here let me summarize the portion of history President Obama flunked.

In the Mohammadian era, Mohammed and the other reprobates he inspired to follow him, decided they were gonna rape who they wanted, destroy what they wished, and steal what wasn't theirs.

Obviously this agenda really struck a chord with the deprived, brain-washed, abusers who could keep neither steady jobs nor adult relationships in their lives.

Because the doctrine of "jihad" allowed/s them to go to war if someone was disrespecting, insulting, or in some cases just telling the truth about this perverted system of belief they were encouraged to kill all who doubted, disagreed, or disbelieved.

So for over 400 plus years these gangs attacked Arabia, large portions of Eastern Europe, the land of Abraham, and even swaths of Western Europe. (Close to two-thirds of the known world.)

Christians were beheaded, burned, buried alive, and mostly beaten in every region.

The Crusades were the reason that most of those exploits except for the area around modern day and historic Israel were reversed.

Did they force conversion? Many will say yes. But did they kill all who disagreed?

In large measure they simply pushed Muslims back to the lands where Mohammed started his glorified nightmare of a religion.

Muslims had not been nearly so kind in their initial assaults.

How terribly ironic it is to this day that the ones who lost "their" unjustly conquered territories still hold a grudge against those who kicked them out by labeling the nations that descended from them as "Crusaders."

So as the President told us all to get off of our high horse--while he simultaneously mounted his (yet one more historical reference he should've looked up before using)--he literally had no idea of what comparison he was making.

Not to mention the fact that slavery was never performed "in the name of Christ"--though it still is to this day "in the name of Islam." And that while Christians themselves overwhelmingly agitated and produced the abolition of slavery in western lands, nary a Muslim has dared to do the same.

The old saying goes: "Those that do not remember the lessons of history, are doomed to repeat them."

In forgetting all about the origins of that time, President Obama also stealthily ignored the atrocities being done today in Islam's name.

The "High Horse" was reserved for the victorious general. It was a steed of honor to declare victory over the known enemy.

Our President neither understands who our enemy is, nor what the victor must do to defeat them.

My earnest prayer is that it doesn't require 400 years of rape, terror, conquest, and beheadings by Allah's jihadists for us to understand the lessons of history and what we must do to assure the watching world that they will never be repeated again.