Above my Pay Grade? 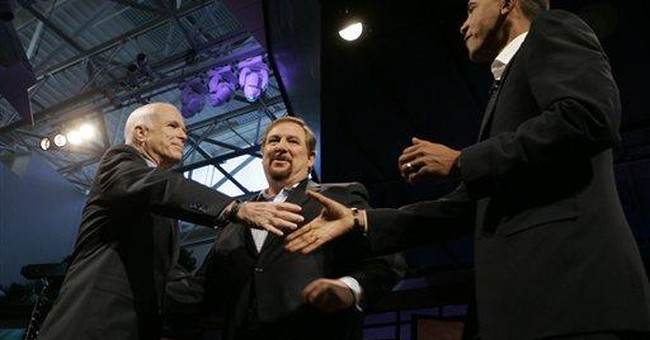 Americans have never expected our public servants to be perfect. In fact on many levels it can sometimes be comforting to know they are not. Foibles, mistakes, faux pas all remind us that while they are called upon to lead us through times of tremendous challenge, that at the end of the day they are one of us. They are not from some line of tyrannical despot royalty allowed absolute power.

Realizing this however also causes us to understand that while they may make mistakes certain qualities are particularly more helpful, attractive, and necessary when vetting the nation's leadership. Honesty, ethical integrity, and transparent commitment to the ideals of our nation are the non-negotiables that we seek, need, and demand. Barack Obama fails the test on all three levels. Saturday night he demonstrated none of the above - and in the presence of the most recognizable mega-pastor in America.

As an aside - my own past issues with Rick Warren being what they are - it was my opinion that Warren hosted perhaps the most helpful presidential forum to date in the 2008 White House race. This shocked me - but to my pleasant surprise - was greatly beneficial for the nation to see. For while Warren and Obama may have been tied at the hip for a few years now, even in the friendly confines of Saddleback Church, Obama was unable to speak truth, and now the world saw it exposed.

His most outright lie was his claim that abortion rates had gone up over the last eight years. Within minutes bloggers at TownHall.com, pro-life groups like Americans United for Life, and even the analyst panel on Fox News Channel had the stats in front of the American public. Abortion rates have actually decreased over the last eight years, and have done so in significant fashion. In fact in January of 2008 it was reported by the Guttmacher Institute and repeated in U.S. News and World Reports that abortions had reached a three decade low.

For Obama to so blatantly say otherwise demonstrated paramount ignorance; ignorance to such degree that he should not be elected dog catcher, much less the most powerful chair of the free world. And if not ignorant then he was more than willing to manipulate the issue by forthright lying to the largest audience of evangelicals in America, and a pastor on national television.

But his willingness to do so is easily parsed in the world of liberal far-left politics today. There is no real consequence to telling untruths in the world of the academic elite that Obama stems from. Every time he opens his mouth it is an opportunity for him to appear as though he is weighing multiple sides of an issue and with his smooth articulation drip words that his sycophantic, brainwashed, supporters believe are divinely inspired script.

But they aren't because he's just a man, just like any other man, with temptations, sin, and deficiencies of judgement. Only Obama's deficiencies in judgement seem unparalleled in recent history.

When asked most forthrightly by Warren as to when a child should have its God given rights protected, Obama balked and claimed "knowing when something" that is obviously living, "begins to live" was, "above his pay grade."

Even as a father he knew it was a lie.

Go back to the day when Michelle first told him that she was pregnant with their first daughter. Was his daughter alive? If someone had desired to injure his baby girl while developing in his wife's body would he have "misunderstood" as to whether it would have been morally wrong? How deep would his anger have been if someone had robbed him of the relationship with his little girl?

And yet this flail speaks to his fundamental misunderstanding of morality and whether or not his moral judgement could be trusted as the most powerful man on earth.

Obama has added even further doubt by outright lying about why he supported the exact same "Born Alive Infant Protection Act" that was even too radical and immoral for Barbara Boxer, Hillary Clinton, and Dianne Feinstein to support. Put differently Obama is the only elected official on record to ever vote in favor of denying life-saving medical care to children who had been born but that were struggling for life.

Is that a decision too confusing so as to be "above the pay grade" as well?

It isn't for most Americans.

But don't let the facts be confused, Obama is now lying about his lie, and claiming that those who say he is lying are the ones doing so.

So is he confused about the facts, bought and sold by the abortion lobby, or just manipulating the issue for bait and switch political gain?

The answer to all three is likely "yes."

And since it is we the tax-payers who hire the person, and give our permission to run our nation, perhaps we should consider keeping Obama at the "pay grade" of his U.S. Senate seat, where his convoluted intellect can be kept in check and balance by those who are not as morally confused, ethically challenged, or blatantly dishonest.

And when his present term concludes - another vacation to Hawaii would do him well.