Why we should not be... there 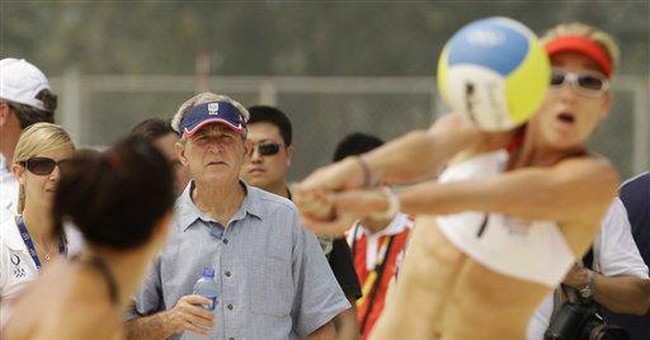 The color of the opening ceremonies and the success of our athletes has given many Americans satisfaction that this "once every four years" summer event is back, and NBC stands to rake in the persons watching, and the profits that arise therefrom. Yet they will be missing one very important consumer. The Lovely Bride...

It has been her tradition for as long as she can remember that her parents and brother and she would gather around the television and cheer on the Americans with fervor, patriotism, and enthusiasm. Last night--the opening night of the games--was a far different story in our own home. After a week of travel and sad goodbyes, we parked ourselves on the sofa looking for the ideal entertainment. As she surfed the choices with the remote control (see guys we don't always need to be in charge) she flew right past the HD Olympic coverage. When I queried her as to the reasoning, especially understanding her long-standing love of the Olympics, she stated it so matter of fact, "I'm boycotting."

This from the woman who longs for the event every four years. This from a woman who doesn't "do" sports otherwise.

"Why," I posited with great curiosity?

As if I didn't know that there were plenty of reasons. Forced abortion and sterilization is having hugely negative impact on the quality and span of women's lives in China. When you couple it with a one-child policy that seeks to grow mostly male children, and increasingly fewer females in the population, you see additional negatives on the horizon.

Add to that the sincerely immoral view that the state has all rights to communication, business, religion and the expression thereof, you begin to see something not even one-millionth of the beauty displayed in the opening ceremonies.

Sure the events of the evening were spectacular, but they were a fraud.

As all of the subjects left the field of the great stadium, with the pageantry the evening could include, did those same television cameras capture the punishment any of them endured because of being the slightest bit "off?" And were there cameras rolling yesterday when the family members of our Olympic Volleyball coach were knifed and felled in broad daylight? Our prayers go with the family as one of them ended up passing away. And what of the groups of Christians who are finding hope, faith, and joy in following the teachings of Jesus Christ by the thousands each day and who now this night live in unrelenting and constant fear so as to worry about their freedom literally around the clock. What of the pastors who have been sequestered behind bars in cells no one sees in order to attempt to instill enough fear into them so that they abandon their plan to tell others of the hope that Christ can bring them?

What of the horrific conditions that government's choke-hold control over the marketplace--a hold that disallows hard work to fully succeed?

And what of the incredible military might that China has openly developed under our nose with well documented promises to bring down the West?

There is much empathy in my home and family for athletes that have trained their entire life to get the Olympic stage, it makes making this decision an even worse reality. A life's worth of training and discipline to be exhibited at the one moment in a person's life that they have done all up to that point to achieve is always worth sincere congratulation.

Yet what of all of the Olympians that have been snuffed out of life through China's sheer force of militarized family planning? Do any of these things sit wrong with you or cause yourself to wonder.

In the Lovely Bride's mind--as much as it pains her personally to do so--she does not have to wonder, ponder, think or reflect. She is simply so overwhelmingly offended by the oppressive form of government, by the heartless and cruel policies that rip child after child from safety of mother's body and love. She is so amazingly baffled that the American government did little more than playing footsies with a regime that has promised to eliminate us that she feels she is exercising the limited amount of freedom she has left.

In a couple of weeks it will all subside.

In a couple of weeks the event Beijing has planned, practiced, and rehearsed for so very long will have come and gone. Then, when we look back, regardless of the number of medals we've taken home, we will likely ask ourselves, "Did we get what we expected out of it?"

Today I would be forced to proffer this idea: there are millions of persecuted Christians, and now a deceased family member of the U.S. Men's Olympic Volleyball Team who would likely argue otherwise.

The Lovely Bride is not an activist, a protestor, or someone who seeks conflict. Given her deep love for her nation, our athletes, and her family tradition, it is genuinely a significant thing that she has chosen to say, "no thank you" this go around.

Maybe she shouldn't be the only one...