Why No Vote Is No Option 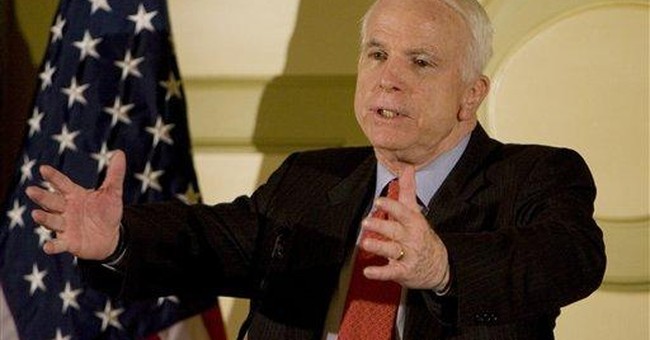 Statements made or actions taken by prominent evangelical leaders implying that Bible-believing Christians would be best served by sitting out this election cycle are not only unhealthy to the welfare of the republic, but antagonistically sinful. No Bible-believing Christian can in good conscience avoid the voting booth--it's anti-biblical, and it equals defiant disobedience.

When John McCain began the surprise winning streak of the political season back in New Hampshire, I began to wonder what the power players on the evangelical right would do, say, and encourage others to do as it related to the General Election of 2008, should John McCain turn out to be the nominee.

I didn't have to wait long.

On the opening day of CPAC, en route to Washington from New York, I, of course, had talk radio on in my car. Fox News Radio's Brian and The Judge were talking that morning about how McCain's speech would go over at CPAC later that afternoon. They were all but acknowledging that Mitt Romney was to address the crowd that morning, choosing instead to focus on the topic of "what must McCain say" to win over the hearts of the conservatives gathered.

Then an odd thing happened. The news broke that Romney was dropping out and a seismic shift occurred in the focus of the discussion. It was then apparent that McCain, now more than ever, needed to work even harder to persuade the conservative base of the GOP party that he would champion their issues.

Brian and The Judge brought on Pat Robertson, who had only weeks earlier endorsed the now vaporized candidacy of Mayor Rudy Giuliani. Robertson spared no words. John McCain had lashed out at him personally only a few years earlier and it was obvious in the tone, demeanor, and sound of Robertson's voice that he would have none of it. No voting for John McCain--done deal.

He also intimated that it might be the kind of election year where the founder of CBN decided that voting at all was just a bit much this go around.

Later that day, no doubt somewhat impacted by the sudden Romney withdrawal, Dr. James Dobson, another powerful voice to and for evangelicals in the political arena endorsed the candidacy of Mike Huckabee. His doing so caused many of us to recount how Dr. Dobson had already pledged never to support John McCain. Many of us who support Dr. Dobson agree with his rationale on why supporting a McCain candidacy is unacceptable.

What worries me is that as a result of these men's negative reaction to McCain's eventual nomination, the message they send to less astute observers of the political process is that voting is optional.

Many evangelicals might take their cue from these two disillusioned men and conclude that not voting, sitting this one out, or refusing to lift a finger in the general election is an acceptable response to a primary season that has yielded us the poorest choice for President in my lifetime, with perhaps the exception of the nomination of Bob Dole.

Many might conclude that in seeing two candidates such as McCain and Obama, who have both stood for the outright violation of the Constitution, that the nomination process is flawed and therefore wiping one's hands clean of it is a decision of conscience that could demonstrate a turning over of this process to God's judgment.

But they would be wrong.

And if Robertson or Dobson are encouraging such (and I'm not making the case that they are), then they should be rejected outright.

For a Bible-believing Christian to abstain from participation in the 2008 general election is to behave in a biblically disobedient nature. Oh sure there may not be as much to be excited about in this year's contest, but large issues do loom in the near future. If we as evangelicals remain silent as justices are seated on the Supreme Court, as our nation responds to jihadists who wish to injure. maim, and kill innocent people, or while our school curriculums begin to add homosexuality, bestiality, and every kind of sexual combination imaginable and refer to it as a family to the textbooks of our nation's school children we must understand that we play a part in allowing these things to happen.

In the Gospels Jesus compels his disciples to render to Caesar what is Caesar's. Meaning that Christians are obligated to participate in the function of civil government and life under the law as long as it does not violate the terms, principles, or instruction of scripture. To be sure, rendering to Caesar in our nation includes paying our taxes, but it means a good deal more as well.

Since Caesar in modern day America is you and me, then we are to play our part in the role of government faithfully. The very minimum of what that includes is the requirement to vote. To not exercise this simple obligation is to, by act and deed, NOT render to Caesar as Christ instructed.

Who you vote for, the rationale for why you support certain candidates, and the degree to which you show rabid enthusiasm for them or more passively hold your nose and vote for the lesser of evils, is up to you. But the act of voting in and of itself, is not. If you are a Bible believing Christian, if you are someone who uses the biblical text to govern the behavior, ethic, and integrity of your life, then you are someone--as an American--whose minimum requirement as it relates to government is to cast a vote.

There are many like me who are thoroughly disillusioned with the choices put before us in this election cycle. In one camp, you have an avowed leftist who will tax beyond anything resembling fairness, who will stand by while the slaughter of children continues unabated, who will seek to ratify the most radical of sexual agendas so as to redefine the very nature of family, and who will pretend to take action against jihadists by sitting at a table with them--all while they seek to plot his ultimate demise. In the other camp, you have a man who has assaulted the freedom of speech unlike any elected official preceding him, a man who does not see the threat to the American family in the radical sexual agenda that is being enacted, and a man who is unsure if a man's wages really do belong to the man who earned them. And for that matter, is even unsure as to whether our borders, in fact, belong to us.

The moral abyss that these two choices provide one with is striking and scary. Nonetheless, it is the evangelical Christian's obligation to make a choice and cast a vote.

Regardless of what "Christian Leader's" voice, newsletter, or television show it may come from, any word to the opposite is unbiblical, and must be rejected.