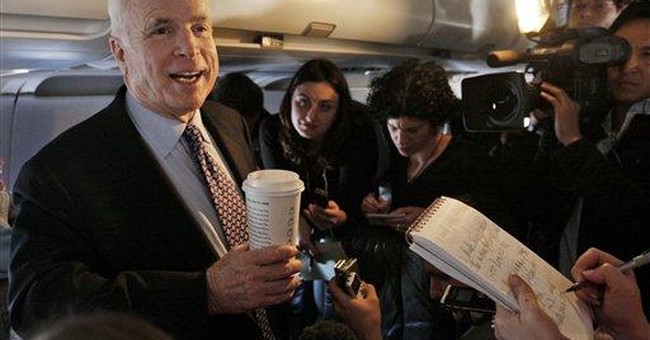 Much has been made of Mitt Romney's positions on a short list of issues previous to entering the 2008 Presidential race, the same has been said of Mike Huckabee. Yet admittedly those two men are running on the campaign platforms that they published on their web-sites and have stood by in debate after debate.

John McCain on the other hand has performed major flip-flops on two of the core positions the party base holds dear, and in essence remade himself and his candidacy multiple times.

Assisted by popular mainstream media coverage Senator McCain has escaped careful scrutiny of his positions, unlike both Romney and Huckabee who have had to endure hit after hit for conservative positions and how those differed from previous policies practiced by the two Governors.

John McCain as recently as the New Hampshire primary still scoffed at tax cuts and chided those who had opposed him for the legislation he authored multiple years over that offered direct amnesty to those who had entered the nation illegally. By South Carolina depending on the group he addressed, McCain had seen the light on border fencing, and began calling for the extension of the Bush tax cuts.

You know - the same tax cuts he fought against. The same tax cuts that pulled us out of the Clinton recession, and helped us recover from 9/11 and gave the government treasury revenues of such magnitude that despite fighting an expensive on-going war against global jihadists still allowed us to reduce the deficit ahead of schedule every year.

Yet highlighting Mitt's previously held positions, positions that he committed to prior to campaigning for president, McCain advanced the double talk of his rival's floppery all the while ignoring his seismic shifts.

And it began to extend far beyond those two issues.

The arrogant Senator began to make allusions to strong judicial nominees that he would put forward if he were to be elected. How easily the voters in Florida forgot that it was Senator John McCain whose "Gang of 14" saw to it that the talented, gifted, and deserving justices were not just moved to the back of the bus.

Senator McCain threw them under it.

The wild-eyed, cocky, and short-fused candidate also attempted to cite his pro-life credentials and his voting record to voters beyond South Carolina. It is my feeling that Senator McCain believes that by running now as a "pro-life" and "strong defense" candidate that he will corner two of the three legs of the Reagan coalition. He's already openly admitted he has essentially no clue how the economy works, or should be fixed, or even managed.

But the suddenly "Verbally pro life" candidate had only months previously admitted that he didn't get all that jazzed about the life issue. When advised by some in his campaign to highlight it more in his appearances on the stump he shrugged his shoulders, and offered snide remarks about how pro-lifers need to get over it.

And of course he refuses to acknowledge the damage he's done to the pro-life activist community through the passage of McCain-Feingold, campaign finance reform legislation that censors voters first amendment expression.

While I was emceeing the "Blogs4Life" conference this year, the pro-life stalwart Senator Sam Brownback shared his thoughts with those gathered. After which he took questions. When asked why he had endorsed Senator McCain his reply was sincere, "His voting record is solidly pro-life."

To which I proffered from the lectern, "Senator I don't question his vote. I just resent the fact that he will not allow me to run a television ad thirty days before an election that points out that Barack Obama favors infanticide." The room erupted in applause. See... we pro-lifers know his vote is safe, but we resent him for zipping our lips - at the most important time of voting consciousness.

Then there's the issue of his victory speeches. Have you ever heard more arrogant dross? Posing as though he is about to call America to greatness, his lips drip with resentment, eye-ball sweeping laughter that seeks to plunge knives into any who disagree with him. It was creepy...

McCain's demeanor is that of a sore loser who feels entitled. Entitled to insult and put on vulgar display his feelings once again to those in his own party who simply wish him to be consistent in all moral issues.

His decision to not once but twice vote against the protection of the institution of marriage demonstrates he is as confused morally - perhaps even more so than he is economically.

And if running his own campaign, thrice jump-started, is a preview of how he will handle U.S. economic policy then we are indeed in for quite a ride - he finished his 2007 campaign operation in debt to the tune of $4.5 million dollars, total donors to date 110,000, and no stated plan for how to pay off the debt.

Barack Obama whose economic policies resemble John McCain's more closely than any of the other GOP candidates was at least able to add $32 million dollars to his campaign chest, and 170,000 NEW donors to his database just in January.

The "independent" voters who pushed the aged Senator across the finish line in New Hampshire, South Carolina, and Florida may jolly well believe that talking tough on terrorism and safe on the pro-life issues will be enough to beat the Obama/Hillary ticket in the general. They may well have to be.

Yet with a man whose fuse is as short as Senator McCain's always seems to be who can guarantee that his campaign season flips won't be flops if he were to be elected.

Super Tuesday may well decide the GOP race by pushing the man whose moral judgement is so warped, whose imaginative attacks on his opponents' records in the last debate hit fantastic new barriers of fantasy, but they don't have to be.

Huckabee and Romney share a dime's worth of daylight from McCain on the issue of terrorism. Neither have been anything but supportive of the surge, the administration, and the troops. Both are far MORE energized in the exercise in their pro-life commitment. Both SUPPORTED the Constitutional Amendment to Protect Marriage - twice. Both have a better understanding of the value of reducing taxes, meeting a budget, and growing an economy than the Senator who could not even keep his own campaign in the black.

In short McCain gives you moral clarity roughly fifty-percent of the time, and given his behavior the last eight years perhaps he's saved eight years of good judgement for an active presidency.

But I have my doubts.

Anyone but McCain... an idea whose time has come!