America’s Security in Space – On the Ballot

Kent Johnson
|
Posted: Oct 27, 2020 12:01 AM
Share   Tweet
The opinions expressed by columnists are their own and do not necessarily represent the views of Townhall.com. 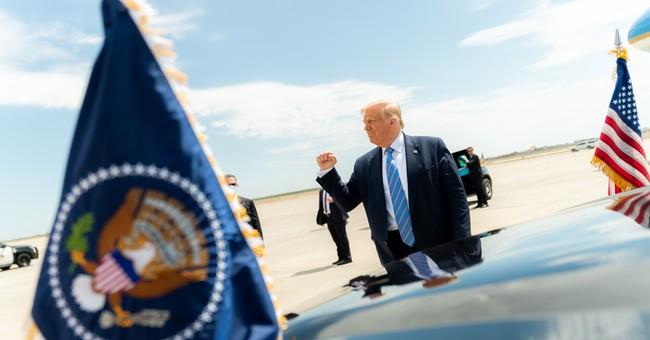 Many Americans recall Apollo 11 astronauts Buzz Aldrin and Neil Armstrong walking on the moon. That daring mission, in head-to-head competition with the Soviet Union, was initiated by Democrat John F. Kennedy and seen through by Republican Richard M. Nixon. Fifty years later, President Trump pledged to put an American man and woman on the moon by 2024.  With Democrat commitments soft, space is on the 2020 ballot. And here is why it matters.

Put simply, if America cannot freely operate in space – for civilian and military purposes – much of what we do on Earth becomes impossible, compromised, or unreliable.  That is why establishing the U.S. Space Force was, in effect, an act of anticipatory national defense.  Space matters.  Trump knows it, while Vice President Biden – and President Obama – disengaged from the topic.

Second, China is the new Soviet Union – when it comes to straining for space dominance, seeking to displace American security in near and outer orbits, threatening access, stability, and peace on Earth.  If this sounds harsh, understand China has tested laser, anti-satellite, and EMP (electromagnetic pulse) technology; they are accelerating militarization of space, as they are the maritime environment on Earth, methodically planning to displace historic U.S. dominance.

Just as the Chinese have test facilities for potential biological warfare agents, such as the one in Wuhan from which the novel coronavirus apparently escaped, they have a robust program for militarizing – and dominating – the space environment.

Notably, in July 2020, an industry coalition released a report warning of China’s EMP capability and questioning intentions. Wrote the authors, China has stolen Western technology “to develop space-based weapons that can neutralize aircraft carrier groups” and potentially “kill 90 percent of Americans” via EMP technology.  If the allegation is stark, the larger point is that China has their eyes on space, and is using space to dominate those on Earth.

They also have eyes for the moon – and that may be one reason that President Trump and Vice President Pence are on a beeline to get to the moon by 2024.  Of all space-related interests implicated in the 2020 election, this could be the biggest.

If Americans return to the moon, creating next steps to permanent presence – as planned in current blueprints – that effort will be part of a more robust America space architecture, from launch and near-Earth to outer orbits, more stations, cycling spacecraft, and an evolving moon presence, eventually opening the path to Mars. China will be playing catch-up.

To be clear, national security in space will follow a return to ambitious civilian space travel, pioneering efforts on the moon, and a growing space presence. But here is the kicker:  Human presence in space requires “life support” – and Americans are leading here, too.

“Life support” is the sine qua non, “without which nothing,” of human space flight.  Humans cannot leave Earth without it.  But America has been creating, deploying, evaluating, refining and increasingly perfecting life support – in Mercury, Gemini, Apollo, and Shuttle programs, plus the International Space Station and for recent government and commercial capabilities.  Several longstanding US-based, NASA go-to providers have mastered this technology, including Leidos, Paragon Space Development Corporation, Boeing, and others with peripheral capabilities.

The U.S. leg-up is critical – and must be maintained.  Life support is “make or break” for human space dominance, and ties back to the larger US space architecture built around human permanence in space.  Needed are technologies like water recovery, air revitalization, systems converting water/carbon monoxide/carbon dioxide into oxygen, and integrated support systems.

Taken together, these various elements reduce to one basic truth:  America’s national and civilian security depend on space.  The degree to which they depend on space is large and growing, from assuring successful moon and human space launch capacity to assuring rock-solid “life support.”  China is not a neutral player but is militarizing space – and chasing us to the moon.  Bottom line:  These factors are why Trump is right to have prioritized space – and why America’s security in space is on the ballot in November.

Kent D. Johnson is a former F-15E Strike Eagle and A-10 Warthog fighter pilot, and a political-military adviser on the staff of the Secretary of the Air Force and senior US adviser to the commandant of the Royal Air Force think tank.  He is currently a defense studies adjunct at North Central Texas College.