For Economic Growth – Congress Should Stretch to Space Launch Sector

Kent Johnson
|
Posted: Oct 29, 2018 11:42 AM
Share   Tweet
The opinions expressed by columnists are their own and do not necessarily represent the views of Townhall.com. 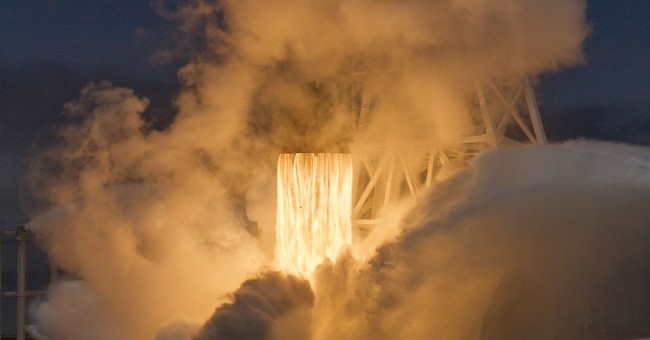 As the American people continue to economically benefit – in measurable ways – from the administration’s new trade and security policies, other targets pop into sight.  One matter worth further consideration is how best to protect American jobs in growth sectors, such as space launch.

Gone are days of Apollo, Space Shuttle and global dominance of heavy lift launch with rockets like the Atlas 5.   Newly appearing are smaller and more agile American rocket companies, able to deliver small and large payloads quickly, economically and with high levels of security to lower and deeper orbits.

The two keys for Congress and the administration to keep in mind – as they have with trade and broader security policy – are these:  First, American rocket companies are, by definition, companies launching from America; in other words, keep national security assets in particular, and commercial satellites with proprietary technology also, close to home.  This elevates US national security.

Second, as we encourage new launch companies, capacities and methodologies, focus on creating more American jobs right here at home, not overseas; in other words, do not build in America, then send jobs tied to launching what we have built overseas.

If these two principles seem parochial, consider the advantages that flow directly from keeping launches of American government and commercial satellites here on US soil.

In an age when our adversaries – and even some allies – are aggressively looking for legitimate and questionable advantage in the marketplace, why would we entrust precious cargo to foreign handlers?

Put differently, both our security and our economy depend on our ability to get highly sophisticated satellites into key orbits, higher and lower, to support troop, ship and airframe movements, but also to support our basic commerce.  If one or more of these assets is transited overseas, and either does not launch or is compromised, the impact could be highly adverse, even catastrophic.   Why take the chance?

Answer:  Make choices that encourage job growth and space launch from US soil. More specifically, next steps should include reviewing trade policy regulations that will swiftly bring launch jobs back from overseas, tying them to launch of precious US commercial and security satellites from home.

Security considerations should tip in a similar direction, preserving – for obvious security reasons – launches of national technical means from US soil alone.  Now that we have a growing space launch capacity, this is not only realistic and timely, but represents an economic and security mandate.  The only remaining question is, will the administration and Congress recognize the mandate and act?  As the economy continues to grow, the answer should be yes.