All Eyes Shifting to Supreme Court 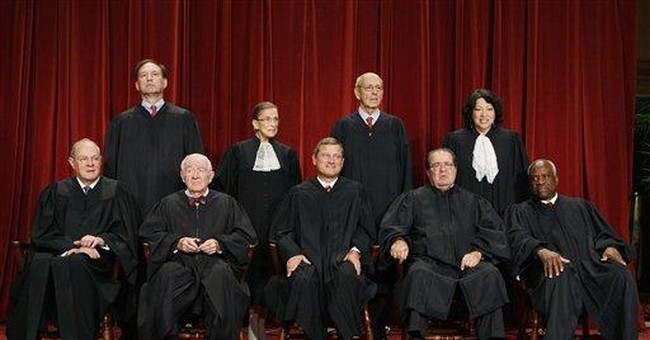 While Tuesday is a major primary-election day across the country, once Wednesday dawns the nation’s eyes will start turning to the Supreme Court as the next major story in America’s capital. A number of big cases are yet to come down as the Supreme Court nears the end of its yearly term, as we also prepare to consider a new justice on our highest court.

By federal law, the Supreme Court’s annual term starts on the first Monday of October. That term goes until the last week or so of June, when the Court rises for its annual recess. We’re in the waning days of October Term 2009.

Although most of the cases the Supreme Court decides have a major impact on the law, none of the decisions handed down Monday are of the sort that grab headlines (to the disappointment of all of us in the press section of the Supreme Court’s magnificent courtroom).

As a result, the story for the day is that each of the next three Mondays will see major decisions come down. Among other things, the Court is considering a Florida case, presenting the question of whether a court order can amount to a taking of property, such that the Constitution requires the government to compensate you for the lost property. The Court’s also deliberating whether an oversight board created by Sarbanes-Oxley to impose heavy regulations on public companies and accounting firms is unconstitutional.

But it’s the social issues that will dominate the end of the Court’s term.

Religious liberty is on the table, as the Court is deciding whether religious groups can be kicked off of public universities for requiring its leaders to support the group’s religious beliefs in Christian Legal Society v. Martinez. Marriage is also on the ballot, with the Court considering whether the Constitution allows people who sign ballot initiatives for hot-button topics (same-sex marriage in this case) to keep their personal information private in Doe #1 v. Reed.

Of all these, the biggest case by far of the year, bigger even than the Citizens United campaign-finance case, is the gun ban case. McDonald v. Chicago presents the question of whether the Second Amendment applies to cities and states. If it does, then you have the same rights as you do against federal gun controls. If not, then the city or state where you live can ban all your guns.

The McDonald case also remains the biggest case because it requires the Court to examine the core meaning of the Fourteenth Amendment for the first time since 1969, considering how to what extent federal rights and federal power can impose on the sovereignty of the states.

These will be the last cases involving Justice John Paul Stevens, who has been serving on the Court since 1975. And the last of them should come down on June 28, the same day that the Senate Judiciary Committee begins its hearings on Elena Kagan, the president’s nominee to replace Stevens.

This all happens as a new USA Today/Gallup poll shows that Kagan’s public support is only 46% to be confirmed to the Supreme Court, less than the three most recent appointments (John Roberts, Sam Alito and Sonia Sotomayor) and close to that of Harriet Miers (who had 44% support), whose nomination failed.

These major cases, coupled with weak support for Kagan, will likely lead Republicans to direct heightened scrutiny to the Kagan nomination, as millions of Americans are reminded of the central role that the Supreme Court plays in the life of the Republic.

The next three weeks will be anything but boring for Court watchers.