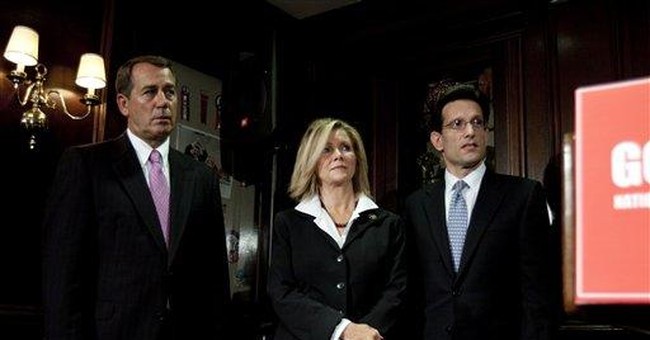 It's deja vu all over again in Washington as the midterm elections rapidly approach and all signs point to an electoral route of the party in power.  Four years ago, the Beltway was abuzz with news of a GOP bloodletting – the result of an increasingly unpopular President, an unpopular war, a spate of corruption scandals, and the general feeling that it was time for a change in Washington.  The same pundits who correctly forecast defeat in 2006 see the same weather on the horizon in 2010, only this time it's the Democrats who find themselves in the path of the storm, beset by an unpopular president, a dismal economic picture, a host of domestic and foreign policy landmines, and a growing Tea Party movement.

Not surprisingly, this current state of affairs has Republicans feeling pretty optimistic about the future.  Newt Gingrich has even suggested that the nation could witness a repeat of the Republican Revolution of 1994.  And he just might be right.  According to the latest Gallup poll, if the midterm elections were held now, the GOP would defeat the Democrats by a margin of ten points, and unless a miracle happens for President Obama and the Democrats in Congress, that kind of momentum will be hard to overcome in the two short months remaining before the midterm elections.  Thus, at this point it appears that a Republican resurgence this November is a foregone conclusion.

What remains to be seen, however, is whether the American people will finally get the change they are seeking, or merely more of the same.

We've been down this road before.  In 1994 the Republican Party, led by Gingrich, capitalized on public disenchantment with the Democrats and seized control of both houses of Congress.  Its message to America was clear, compelling, and above all conservative.  Why then, 12 years and one Republican president later, was the Democrat Party able to execute an electoral revolution of their own?  And why is that revolution, four years and one Democratic president later, on the brink of collapse?  The answer is simple, and points to a problem that has plagued both parties for far too long:  An absolute dearth of integrity and authenticity in Washington.  Candidates campaign one way and govern another.  They espouse one set of beliefs and principles, only to abandon these beliefs and principles once they get to Washington.  On the stump, they are for the people; in office, they are captives of the special interests.  On the trail, they are for change; in office, it's the same old same old.  In campaign mode they advocate changing the guard; in office they seek to perpetuate power.

In 1994, Republicans advocated limited government, fiscal discipline, and family values.  The public bought in: but, in little more than decade, the GOP had delivered unprecedented growth of government, reckless spending, and shameful ethics scandals.  The people felt abused and betrayed, and they took their revenge at the ballot box.  In 2010, the American people are once more sending the message that enough is enough.  Government has gotten too big and too intrusive in the day-to-day lives of its citizens, our national debt and budget deficits are out of control, the two major entitlement programs are on the brink of collapse, the economy is suffering from woeful mismanagement at both the federal and state levels, and the president seems determined to advance a far left social agenda by any means necessary.  The people long for candidates in whom they can place their faith once more, candidates who will place the interests of the people ahead of the K Street lobbyists and their clients, candidates who will not abandon principle in favor of political power.

Do such men and women exist?  If so, are they the kind of people who run for office?

We recently saw a remarkable demonstration of the American people's desire for a revolutionary change in the way Washington does business.  At Glenn Beck's "Restoring Honor" rally, nearly half a million people congregated in the nation's capitol to call for a restoration of America's founding ideals.  They are tired of stump speeches, slogans, and empty promises.  They want candidates with servants' hearts, not professional politicians who long to grow old and fat dining on the largesse of special interests which, in turn, have an insatiable appetite for government money and favors.

This election cycle, the American people are poised to once more give the GOP a chance to be the party of honor and integrity.  That party failed to live up to this standard the last time around.  Will it fail again?  If so, pendulum will likely swing again.  2014 is only four short years away.