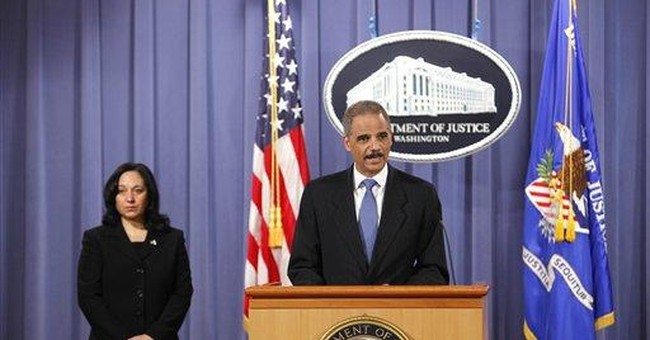 President Obama's election as the first African-American President of the United States was symbolic of how far we've come over the last half-century since Brown v. Board of Education and the brave actions of people like Rosa Parks, right? Not according to new Attorney General Eric Holder, who recently stated that our nation "still ha[s] not come to grips with its racial past, nor has it been willing to contemplate, in a truly meaningful way, the diverse future it is fated to have." AG Holder explained that, "we have always been, and we, I believe, continue to be, in too many ways, essentially a nation of cowards." With all respect to Mr. Holder, he is overstating his case and dismissing the great steps our nation has made toward racial equality in the past several decades.

How can the Attorney General believe that on "Saturdays and Sundays, America in the year 2009 does not in some ways differ significantly from the country that existed almost 50 years ago"? Surely he need only look around his own administration to see the leaps and bounds our country has made towards embracing our American ideal of human equality. Those same people he accuses of ignoring race on Saturdays and Sundays have elected our first African-American President. Since 2001, we have seen an abundance of African-American "firsts": the first National Security Advisor, Condoleezza Rice; the first Republican Committee Chairman, Michael Steele; the first Secretary of State, Colin Powell; the first governor of New York, David Paterson; the first owner of a TV and movie studio, Tyler Perry; and the first male and female billionaires, Robert L. Johnson of BET and Oprah Winfrey. Moreover, the Obama Administration has filled many posts with African-Americans, including U.S. Ambassador to the United Nations, U.S. Trade Representative, Administrator of the Environmental Protection Agency, White House Social Secretary, and, obviously, Attorney General. Ordinary Americans have demonstrated their rejection of racism at the box office, in the voting booth, and in front of their home televisions. The Attorney General believes that we are not having a discussion of race in our everyday lives, but he ignores the evidence of the nigh-constant discussion of race that goes on in the media, politics, the workplace, and many homes.

Unfortunately, some of the strongest spokesmen against racism are unwittingly perpetuating racism. A recent instance of this was seen when The New York Post published a cartoon depicting the author of the stimulus bill as a chimpanzee shot by two policemen (in reference to a recent wild chimp story). One of the policemen was saying, "They'll have to find someone else to write the next stimulus bill." While this cartoon was a clear reference to the recent chimpanzee news story and had nothing to do with Barack Obama (after all, Congress authored the stimulus bill, not President Obama), Al Sharpton took the opportunity to call for the public firing of the comic's author. Sharpton called the cartoon "an invitation to assassination." This kind of inflammatory hyperbole is doing more to retard racial reconciliation than Holder's supposed Sunday segregation. When activists like Sharpton "discover" racism through their manipulation of benign public statements, they discourage any real discussion on race.

Too many today have been bullied into silence over issues of race. They tiptoe around any topic that involves race, for fear that they will be labeled "racist" for an innocent question or comment and their careers tarnished forever. If they talk about race at all, they are boxed in and forced to regurgitate the standard talking points on the issue, because anything else could get them in trouble. As John McWhorter recently explained, "It is unclear to me what purpose this brand of sensitivity serves. You must joke with us delicately. You must engage in ticklish 'conversations' with us about what's wrong with you. So delicate we are, so freighted with legacies, ever blinking in the light." If more and more people begin to share McWhorter's frustration, we can move past this hypersensitive political correctness and have the kind of real conversations supposedly advocated by Mr. Holder.

The media has a large role to play in the discussion of race in our country. Newspaper reporters, TV pundits, and online bloggers often fall into the trap of "finding racism" where none exists. They exploit racial concerns to write headlines that sell. They teach their readers and viewers to look for the racism behind every statement, thereby perpetuating the very racism they claim to deride. The media today adamantly foists a lens of racism upon our culture, insisting that racism pervades our every thought and word if only we will do enough naval-gazing to recognize it.

The media's perpetuation of racism is seen most clearly in polling. They constantly divide the populace along racial lines. They could use polling categories based on economics, country of origin, immigrant status, wealth, location, etc., to dissect the responses of the populace. Instead, they revert again and again to racial subdivisions: white, black, hispanic. It is likely that the black man in the inner city has more in common with his white neighbor than with the black man in upper-middle-class suburbia, but, by insisting on racial categorization, the media perpetuates the idea that there are and should be absolute racial divides. Alas, the media does not simply report on the news—they pick the news and decide how to interpret it. With this power comes the corresponding responsibility to avoid the racial stereotypes and categorizations they decry.

Ultimately, however, Attorney General Eric Holder's call for further discussion on race is not without merit. Americans ought to continue to work towards racial equality, and part of this work requires continued discussion. But Mr. Holder is wrong to diminish the great strides our society has taken towards increased racial equality in the past half-century. We have come a long way, and that progress required the courage of people on "Saturdays and Sundays" to move beyond their prejudices and raise their children differently.

Recently, a former KKK member named Elwin Wilson came to U.S. Representative John Lewis to apologize for beating him at a protest in 1961. Mr. Lewis was then a member of the Congress of Racial Equality's Freedom Riders, who tried to enter an all-white train station waiting room in a nonviolent protest. In the 48 years since, Mr. Wilson has had a slow change of heart and recently apologized to Mr. Lewis for his actions. This is the kind of real, lasting change which shows how far our culture has come, and it should not be dismissed blithely through the reckless statement that we are a nation of cowards. Our country is embracing the Founding ideal of racial equality more fully as each year passes, and it behooves us to recognize this fact, be glad for it, and continue to press forward.