Ken Blackwell
|
Posted: Mar 24, 2020 12:01 AM
Share   Tweet
The opinions expressed by columnists are their own and do not necessarily represent the views of Townhall.com. 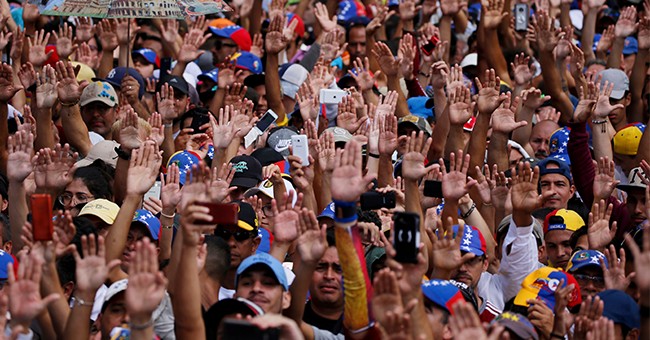 Venezuela is vulnerable. The White House in August imposed new economic sanctions on the country and the oil glut caused by the coronavirus pandemic, meanwhile, is rendering Venezuela’s vast supply of recoverable oil near-worthless.

“[N]o other country in the region will be as hard hit as Venezuela, which relies on oil sales for 85 percent of its government spending,” writes Andres Oppenheimer, a columnist for the Miami Herald. “Last year, Venezuela’s oil exports had already fallen to $9 billion, from $73 billion in 2011.”

All these factors—U.S. sanctions on Venezuelan oil, the coronavirus pandemic and consequent oversupply of oil on the global market—combine to make a perfect storm that leaves Venezuela susceptible to further bankrolling by China and Russia. President Donald J. Trump can’t allow these opportunists to swoop in and exert more control over a crumbling Venezuela.

If he does let China and Russia further wrap their tentacles around socialist President Nicolas Maduro’s finger, he runs the risk of surrendering important strategic ground in the struggle for energy security. Venezuela is already indebted to both countries; for more than a decade, China and Russia have poured billions into the collapsing country.

As the Los Angeles Times reports, “China and Russia are Venezuela’s two main creditors, and they have been the principal economic force keeping the Maduro government afloat, making the difference between solvency and bankruptcy, financial experts say.” That was at the beginning of 2019, well before the coronavirus pandemic began sweeping the globe.

Maduro last week announced the country, in response to the coronavirus, is suspending flights from Europe and Colombia. More recently, he ordered businesses in six states and the capital city of Caracas to close and people to remain at home. School was canceled beginning Monday, March 16.

Otherwise, Maduro’s response to the global pandemic is underwhelming, to say the least. As is the case in other countries, there are very few coronavirus tests available and some Venezuelan healthcare workers, their hospitals battered by years of socialism, don’t even have enough supplies to wash their hands, reports Bloomberg.

“There are no eye protectors. We have no gloves, masks or soap, something so basic,” Dr. Jose Soto, a specialist at a hospital in Caracas, the capital of Venezuela, told Bloomberg. “We now treat five patients where we used to treat 25 just six years ago,” he said.

Furthermore, many healthcare providers in Venezuela have left the country because of the demise of the nation’s healthcare system. Consequently, hospitals are grossly understaffed and therefore ill-equipped to meet the inevitable demand for lifesaving medical care.

The nation is teetering on the edge of collapse and grossly unprepared for the devastation that could befall them. These circumstances make Maduro easy prey for China and Russia, who would like nothing more than to strengthen their foothold in the country.

President Trump for good reason has imposed sanctions on Venezuela, but should act to protect the American oil assets that remain in the battered country by allowing American energy companies to continue their operations.

The White House, instead of pulling out and cutting off Venezuela entirely, should be protecting our interests in a nation with an estimated 500 billion barrels of recoverable crude oil because—if there’s a time to get tough with China and Russia—it’s now.

Otherwise, Russia and nations like it will exert more control over Venezuela in much the same way Russia co-opted Cuba during the Cold War. Cuba to this day gets support from the Russian government. Maduro is in a precarious position and will do all he can to maintain power over the Venezuelan people. The time to counteract Chinese and Russian advances is now, before it’s too late.

Ken Blackwell is a former U.S. ambassador to the U.N. Human Rights Commission and serves on the advisory board of Donald J. Trump for President, Inc. Lt. Gen. (Ret.) William Gerald “Jerry” Boykin was the United States Deputy Undersecretary of Defense for Intelligence.