Ken Blackwell
|
Posted: Nov 13, 2019 12:01 AM
Share   Tweet
The opinions expressed by columnists are their own and do not necessarily represent the views of Townhall.com. 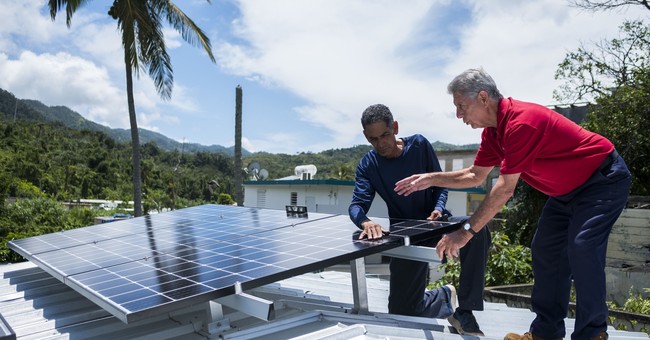 Without a doubt, President Trump's pro-growth policies have resulted in a booming economy with unemployment rates at historic lows. This extraordinary era of job creation has been made possible in part thanks to the Trump Administration's laser focus on slashing regulations for energy producers and long overdue reductions to the burdensome tax code. However, to keep the economy flourishing, the D.C. swamp needs more draining, and the first target should be to eliminate an unfair tax credit that only still exists thanks to crony capitalism and renewable energy lobbyists.

Temporary tax incentives can encourage innovation but must include mandates requiring businesses to stand on their own. Fifteen years ago, the Solar Investment Tax Credit (ITC) was created when solar energy was an emerging market. Now, the solar energy sector is experiencing explosive growth and is about to out-compete natural gas on the cost of energy, thanks to endless taxpayer-funded support and local government mandates.

With extensive foreign investment in solar manufacturing facilities in the United States and now renewable energy accounts for more than one-third of all new generating capacity. In fact, there is so much activity in the solar energy sector, the market has been flooded with cut-rate solar panels, largely thanks to China which stole intellectual property worth billions of dollars. Times have certainly changed, and there is no reason to extend generous solar tax subsides.

Interestingly, the ITC was set to expire in 2019, until Senator Catherine Cortez Masto (D-NV) and five congressmen from the West and East coasts have submitted a proposal to extend for five years, with the hopes of House passage just before Christmas recess. Why would members of Congress be so interested in continuing green energy tax subsidies, which mostly benefit the wealthy? As left-wing Vox.com admitted, clean energy tax credits are highly regressive, with a majority benefiting the top quintile of income earners.

If you are one of those Tesla-driving coastal elites and want to power your home by solar energy with the current price tag of $22,000 for a typical 6-kilowatt residential rooftop system, you should have the freedom to do so. But the tax code and D.C. lobbyists should not force your neighbors to pay for it.

Instead of focusing on special tax credits or obsessing over impeachment, Congress would be wise to continue the tax reform after the Tax Cuts and Jobs Act. President Trump's signature tax-cut legislation lowered rates removed many individual carve-outs. Extending this solar tax credit would violate the spirit of this major tax-cutting victory.

Congress should change the arbitrary way it offers energy tax credits. Washington, D.C. bureaucrats should not be empowered to pick winners and losers based on political reasons. It's time for Congress to act and stop solar government subsidies.