Too Little, Too Late?

Ken Blackwell
|
Posted: Apr 13, 2019 12:01 AM
Share   Tweet
The opinions expressed by columnists are their own and do not necessarily represent the views of Townhall.com. 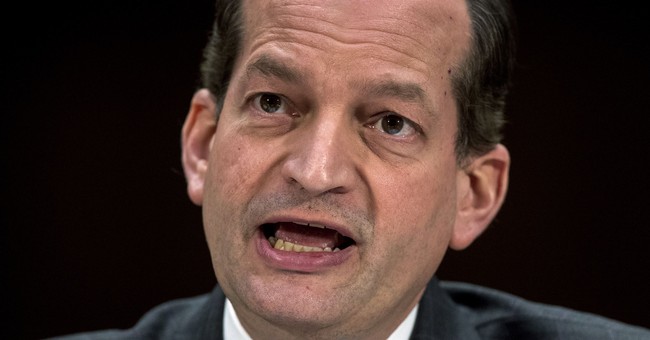 The Labor Department’s recent proposal to revamp the Obama administration’s so-called “joint employer rule” is being lauded by Republicans and the business community. The long overdue proposed rule would limit businesses' joint legal liability with franchisees or contractors for workplace violations, revamping harmful economic regulations from the Obama administration.

However, praise for the proposal comes with an important qualifier: “long overdue.” With the two-year anniversary of Labor Secretary Alex Acosta’s confirmation approaching, it is hard not to wonder: why is this Obama-era regulation only now being rolled back? Unfortunately, the same question applies to other policy areas that desperately need Secretary Acosta’s attention—or have even gotten worse under his leadership.

First, Acosta has expanded the use of drones by the Occupational Safety and Health Administration (OSHA), which could lead to invasive government oversight. OHSA, an agency within the Department of Labor, searches workplaces for safety infractions, and it has begun using drones to survey construction sites and even oil rigs. This policy is ripe for abuse. Under Acosta’s new guidelines, OHSA must get permission from the employer supervising a work site, but if permission is denied, OHSA can obtain a warrant. This policy will open work sites nationwide to an unprecedented level of video surveillance; it also raises legal questions regarding privacy and confidentiality, as OHSA will have open access to film work sites, as well as an opportunity to expand their citation-issuing capabilities.

Secondly, the Labor Department doubled down on Obama-era regulations that wrap contractors in red tape over compensation reporting. It issued guidance to representatives from the department who is suspicious of unfair pay that would create a regulatory burden for government contractors. The guidance adds expenses that will force contractors to absorb the cost of the reporting and cut corners elsewhere at the expense of its employees. Moreover, the guidance was issued in August without any opportunity for comment by the affected contractors. They would certainly have had something to say about the heavy-handed methods used by department officials to investigate pay practices.

For example, the U.S. Chamber of Commerce reports that Labor Department investigators have previously demanded to meet with a contractor’s information technology manager to thumb through company emails “without any regard to privacy, propriety concerns or relevancy.” The report also raises concerns about unreasonable demands investigators made of the contractors, and documents general complaints of apparent incompetence on the part of the Labor Department.

Finally, another questionable Labor Department practice includes the so-called “common interest agreement,” an information-sharing arrangement between the department and those suing or thinking about suing a corporation over alleged workplace discrimination. “If this is known, it could inhibit settlement discussions since employers will be giving information to plaintiffs’ lawyers in addition to the government,” Lawrence Lorber, the Office of Federal Contract Compliance Programs director under President Gerald Ford, told Bloomberg. The administration should review and rework these troubling Labor Department practices.

To his credit, Acosta is rolling back regulations on paid overtime hours. Obama implemented a provision that required overtime pay for anyone earning less than $46,000 a year. The rule even applied to employees doing executive or administration duties that had long been exempt. When implemented, the regulation was widely panned by businesses across the nation. Between this measure and the joint-employer proposal, Acosta has occasionally shown that he has the courage to roll back Obama-era regulations that stymie growth.

Such measures are the exception, and the DOL’s lack of output is in stark contrast to other agencies, such as the Environmental Protection Agency and the Department of Education, that are implementing bold policy reforms. Secretary Acosta needs to build on the momentum of his all-too-long awaited joint-employer proposal.

Share this on Facebook
Tweet
'Justice was Served': Loudoun County Student Found Guilty of Bathroom Sexual Assault
Landon Mion
Biden Jokes to Elementary Schoolers That His Job is to 'Avoid' Answering Questions from Reporters
Landon Mion
Dave Chappelle to Transgender Community: 'I Am Not Bending to Anybody’s Demands'
Landon Mion
Father of Loudoun County Sexual Assault Victim Demands NSBA Apologize for Labeling Him a Domestic Terrorist
Landon Mion
Another Large Migrant Caravan Is Heading Towards the US: 'Tell Biden We Are Coming'
Julio Rosas
Two D.C. Police Officers Were Reportedly Told to Have Abortions to Keep Their Job
Madeline Leesman