Ken Blackwell
|
Posted: Jul 18, 2018 10:15 AM
Share   Tweet
The opinions expressed by columnists are their own and do not necessarily represent the views of Townhall.com. 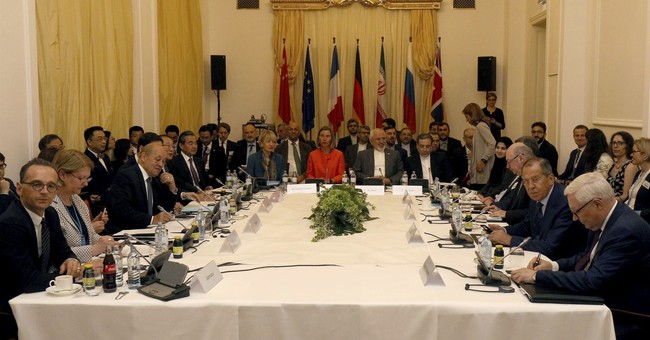 On June 30, several European authorities thwarted an attack on the annual Free Iran rally organized by supporters of the National Council of Resistance of Iran (NCRI). Considering that Assadollah Assadi, the intelligence station chief at the Iranian embassy in Vienna, was arrested along with two would-be bombers, it is abundantly clear that the plot was masterminded in Tehran. While Tehran tried to depict the foiled plot as a “false flag” operation by the opposition, the claim was rejected as ridiculous by a senior U.S. State Department official. In fact, the opposition’s intelligence from inside the Islamic Republic determined that the decision to undertake an attack on the rally was made months earlier by the highest Iranian authorities, including both Supreme Leader Ali Khamenei and President Hassan Rouhani.

The foiled plot was the most significant Iranian terrorist undertaking in recent years, but not the only one. In March, another plot was thwarted in Albania, where there is a sizeable presence of the People’s Mojahedin Organization of Iran (PMOI/MEK), the main Iranian opposition group and leading constituent of the NCRI coalition.

Terrorist attacks by Iranian operatives and their proxies date back to the 1980s and 1990s. Tehran’s behavior has not changed in any meaningful way over the years. Over roughly the past two years, there have been multiple reports of German authorities disrupting efforts by the Iranian Revolutionary Guard Corps’ Quds Force to spy on individuals and groups with links to Israel as well as on MEK activists.

The unraveling of the plots in Albania and France, coming just three months apart, strongly suggest that Iran is stepping up its operations in Europe. This is unsurprising in light of the domestic conditions inside the Islamic Republic, especially when one considers that both plots targeted the NCRI and MEK. The Paris attack would have set off 500 grams of TATP explosive within a crowd of roughly 100,000 and in the presence of hundreds of European and American dignitaries. Its planning began very soon after Iran experienced a mass uprising that took the clerical regime by surprise with explicit calls for regime change.

The larger protest movement was given a boost in March when NCRI President-elect Maryam Rajavi marked the Iranian New Year holiday of Nowruz by praising the nationwide uprising and urging pro-democracy activists to turn the year ahead into “a year full of uprisings.” This statement came right around the time that Albanian authorities made their arrest of would-be terrorists operating on behalf of the Islamic Republic. Protests have continued in different shapes and forms throughout 2018.

The regime’s authorities, including Supreme Leader Khamenei, have variously acknowledged the leading role of the MEK since the protests began. These statements leave little doubt about Tehran’s desperation to disrupt the pro-democracy movement both at home and abroad.

In pursuit of that goal, they are even willing to awaken sleeper cells and put their major diplomats at risk. The foiled plot in France came at a time when Tehran was trying to woo Europeans to stay in the nuclear deal as a last ditch effort to prevent the Iranian economy from collapsing as a result of new US sanctions. It vividly illustrated the ayatollahs’ paranoid towards Mrs. Rajavi’s movement as a viable, democratic alternative to the regime in Tehran.

The new spate of terrorism also undermines the false distinction, pushed by some in Europe, between Supreme Leader and Rouhani and his foreign minister Zarif when it comes to use of terrorism to advance their objectives.

Of course, the perception of their differences will not be much disrupted if European authorities remain generally quiet about the plots they have foiled in recent months. Unfortunately, this is just what they have done so far. It is an unconscionable decision, and one that threatens to shield terrorist masterminds from justice and from public scrutiny. In the first place, it puts lives at risk by downplaying the terror threat and by avoiding public pressure for a more serious political response. And in the second place, it represents the nations of Europe turning their backs on the democratic principles that are embodied by the targets of the most recent would-be attacks.

Iran’s malign behavior in Europe clearly validates the tough American approach to Iran policy. U.S. Secretary of State Mike Pompeo was spot on last week when he accused Iran of using its embassies to plot terrorist attacks in Europe.

The NCRI and its constituent groups are sure to be targeted on European soil once again in the future, unless European governments break their silence and take serious action to disrupt the years-old terrorist networks operating under diplomatic cover in Austria, Germany, France, and perhaps the entirety of the European Union.

In the face of that threat, EU member states should seriously consider shutting down Iranian embassies or expelling diplomats who may well be associated with the IRGC Quds Force or the Iranian Ministry of Intelligence. In discussing the disruption of the Paris plot, a spokesperson for the Belgian judiciary acknowledged that “practically all employees of Iranian embassies are part of the Iranian Secret Service.” Yet political figures throughout Europe remain wary of saying such things out loud. This pattern of silence must come to an end, lest the threat grows still worse for European citizens as well as Iran’s pro-democracy opposition movement.