Ken Blackwell
|
Posted: May 04, 2018 12:01 AM
Share   Tweet
The opinions expressed by columnists are their own and do not necessarily represent the views of Townhall.com. 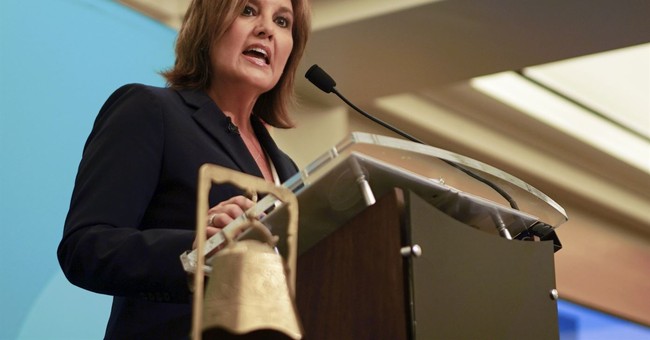 President Trump needs a stronger bench in the U.S. Senate to get his nominees approved and accomplish his agenda. Mr. Trump surprised the pundits and beat Hillary Clinton in Ohio by +8 points, helping Senator Rob Portman coast to an easy 2016 re-election victory.  But 2018 is not 2016.  President Trump is not on the ballot and Senator Sherrod Brown brings the advantages of incumbency.

President Trump recently endorsed Rep. Jim Renacci in Tuesday’s Ohio GOP Senate Primary (May 8th).  However, regardless of who becomes the GOP nominee for Senate, the real opportunity to fire Sherrod Brown in November and flip Ohio’s Senate seat RED, is actually in Ohio’s hotly contested gubernatorial primary . . . and her name is Mary Taylor.

Lieutenant Governor Mary Taylor is facing off against Attorney General and former U.S. Senator Mike DeWine in Tuesday’s gubernatorial primary. Mr. DeWine has more money and was endorsed by most of the Columbus Establishment early, but he also brings a 42-year record as a career politician who voted for amnesty for illegals and chain migration multiple times, earned an “F” from the NRA for partnering with Chuck Schumer restricting 2nd amendment freedoms, and an atrocious record on judicial confirmations including voting AYE on Sonia Sotomayor and Merrick Garland, to name just a few. Ohio conservatives remember Mr. DeWine’s long, liberal record and it has been reinforced recently when as AG he mandated Driver’s Licenses be given to illegals in Ohio. AG DeWine’s 25-point lead in the polls has vanished over the past six weeks despite his huge spending and media advantage, and now the race is a literal dead heat, with 25% still undecided.

Lt. Gov. Mary Taylor is the true conservative in the race.  She chose Nathan Estruth, a strong Christian business leader known nationally as a conservative champion, as her running mate, and Mary is also the only candidate that has worked with President Trump.  In fact, President Trump has been in Ohio 3 times in the last 12 months, and Mary has been with him all 3 times.  Mr. DeWine has failed to appear with the President and has chosen instead to perpetuate Governor Kasich’s team and legacy (indeed, DeWine’s campaign manager, Dave Luketic, ran Kasich’s Presidential SuperPAC!).  Further, Mary Taylor worked an important jobs and energy investment by private companies in southeast Ohio directly with President Trump in the Oval Office last fall.

Most importantly for switching that Ohio Senate seat, Mary Taylor is without a doubt the stronger general election candidate. Mary is a conservative accountant and mom who has much broader appeal amongst Independents and conservative Democrats than Mike DeWine, a 42-year career politician.  In fact, in the last really tough election cycle in Ohio, 2006, when I lost the race for governor and DeWine lost the race for Senate to Sherrod Brown, only one GOP statewide candidate won that year . . . her name was Mary Taylor, running for State Auditor, and she outpolled sitting Senator DeWine by over 175,000 votes statewide.

Private polling shows having Mary Taylor at the top of the ticket against Obama/Elizabeth Warren protégé Richard Cordray, will lift all GOP candidates’ chances, whereas having Mike DeWine as the nominee puts an anvil around the GOP Senate nominee’s neck, pulling him down 10 points or more, as many conservatives will choose to sit it out.  Ohio deserves and needs conservative champions like Mary Taylor and Nathan Estruth, and the GOP Senate nominee needs them as well to defeat Sherrod Brown and flip the seat red in November.